The Fitzgeralds haven’t yet opened their Easter eggs 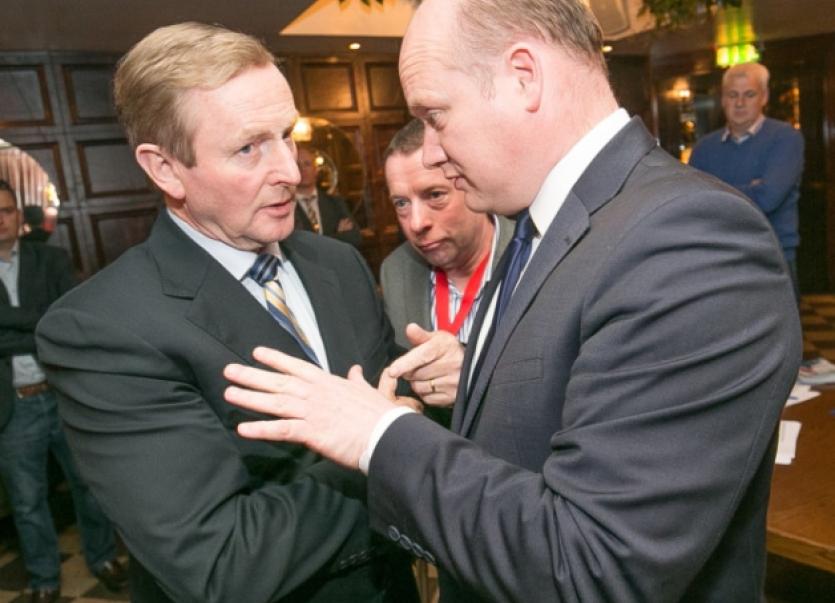 He was dressed very skimpily for canvassing with Fine Gael candidate, David Fitzgerald in the city last Saturday week.

Wearing tennis shoes, light trousers, shirt and light jacket he was frozen and his large frame wasn’t altogether covered by the umbrella used to protect him from the wet weather.

Always ready with an honest answer he said: “I didn’t expect it to be raining and yes I forgot to look at the weather forecast.”

Speaking of Cllr Fitzgerald, he said: “He’s a great candidate and the most articulate in debates.

“In terms of making an impact in the Dail and nationally, he is the best of the candidates,” Minister Varadkar said.

Anyway, he must have been doing something right because the first house they called to, they were invited in for tea and scones. They accepted the invitation of Co nor and Nora Darcy. Nora is is a member of Keep Kilkenny Beautiful (KKB) along with Cllr Fitzgerald.

It was all good fun and then the real work started. Next door, Sinead, from a well-known Fianna Fail family promised Fitzgerald a vote but didn’t say it would be number one.

It got better next door where poet, writer and creative mentor, Frank Marshall arrived out and again it was a warm greeting and he admitted to having once voted Fianna Fail.

However he said he was a coalition man and that he would vote for the Government but didn’t say if it would be for Labour or Fine Gael and that wasn’t lost on the minister.

All the time Cllr Fitzgerald’s cousin, Declan Gibbons was watching on and was plotting where they would go next.

He seemed confident and said the campaign had been great and that he and the other members of the team were pleasantly surprised by the reaction to Cllr Fitzgerald on the doorstep, especially in Carlow, where up to the last few weeks he had a very minor presence.

Across the road, David’s wife Paula was gathering leaflets from the back of the car getting soaked.

Asked how it had been the last few weeks she replied with one word: “Hectic.”

She then added: “You know we still haven’t opened our Easter eggs yet we have been so busy between the children doing things for school and sports and the canvas,” she said.

As we shade under a tree from the rain, Paula Fitzgerald, a member of the Walsh family from the city’s Waterford road agreed that the campaign was exciting. “He has enlisted and he’s a good man to soldier.

“He does the work on the ground and I have said to people on the doorstep, I’m his wife, I know what he’s doing and I know how hard he works.

“There is no point wasting my time and the electorate’s time and so we will take it one day at a time,” she said like a woman on a mission.

Joe from Cavan, a resident of Dukesmeadows stopped his car and said he had one question for Cllr Fitzgerald and the rest of the candidates: “When will I get my standard of living back.” He made it clear he won’t be voting.