‘The Irish people are being taken advantage of’ – Peter O’ Loughlin 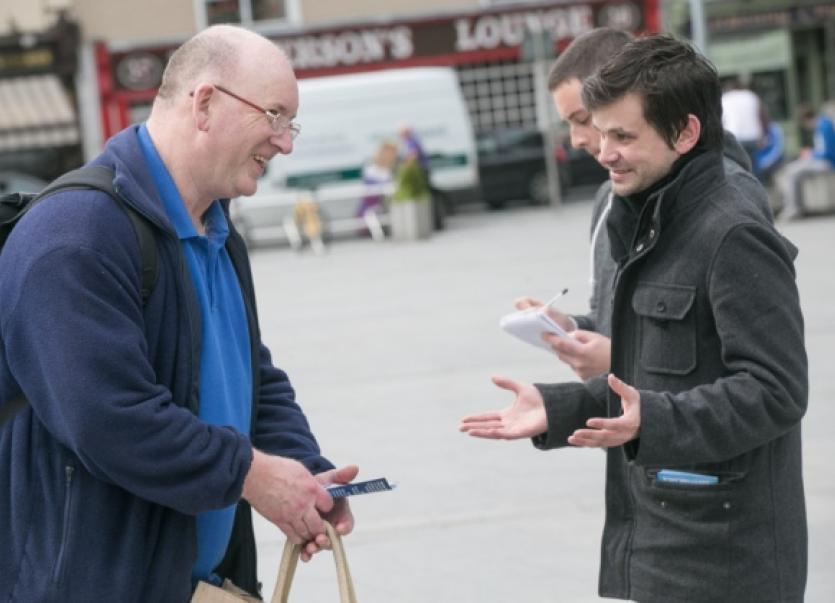 Peter O’ Loughlin says the European Union experiment has failed. It is time for Ireland to strike out on its own, and use its natural resources for the benefit of the Irish people.

Peter O’ Loughlin says the European Union experiment has failed. It is time for Ireland to strike out on its own, and use its natural resources for the benefit of the Irish people.

I meet him on Monday afternoon on the Parade in Kilkenny City. The streets aren’t particularly busy, but people have time to chat to him, and have a look at the literature.

Living in Carlow, Peter is the co-founder of a new political party, Identity Ireland – borne out of a dissatisfaction with the way the country is being run. He describes the group as a ‘pro-sovereignty’ party, advocating a withdrawal from the European Union.

“We feel very strongly that the Irish people are being taken advantage of in many respects,” he explains.

“Our resources are being sold out. They are not going for our benefit, whether it’s fisheries, mineral extraction like zinc and lead, agriculture – obviously the sugar industry is a huge issue in Carlow. That was shut down, although it was viable.”

The first person we stop is Roisin McQuillan, who politely listens to what he has to say. She asks him where the party is and how many members there are. He reveals that there are presently around 100 members, which it is hoped will grow moving forward towards the upcoming General Election. She wishes him well in his campaign.

Peter tells me it is difficult to pick out one single issue that is coming up a lot on the doorstep.

“Jobs, really, is a huge one – the economy is very important,” he says.

“I think a lot of people realise that obviously if we aren’t making the money, we can’t fund things. We can talk about individual areas like health, social housing, disability. But the simple fact is, if you ask people what’s the major problem with all these areas, it’s lack of resources.”

The next person we meet, Joe Moloney, is concerned about the economy.

“It’s a joke that we are in that situation,” he says, agreeing that a lot of money is going outside the country.

“I haven’t decided yet [who to vote for], but I will certainly consider it,” he says.

One of the more divisive issues – but one that Peter says a lot of people are starting to talk about – is immigration. He is proposing new, stricter border controls.

“It is putting a strain on social systems, jobs, competition for jobs, driving down wages at a time when Irish people are forced to emigrate, are unemployed, under-employed or on training courses.”

He says that Identity Ireland and its policies are being quite well received as an alternative to others – because of the vision they articulate as opposed to ‘bland soundbites’.

“A lot of people know who they don’t want to vote for,” he says.

“They tell you ‘I’m not voting for Fianna Fail, I’m not voting Fine Gael’ – for obvious reasons. Most people will listen, and most people are actually quite receptive once they here what we have to say.”