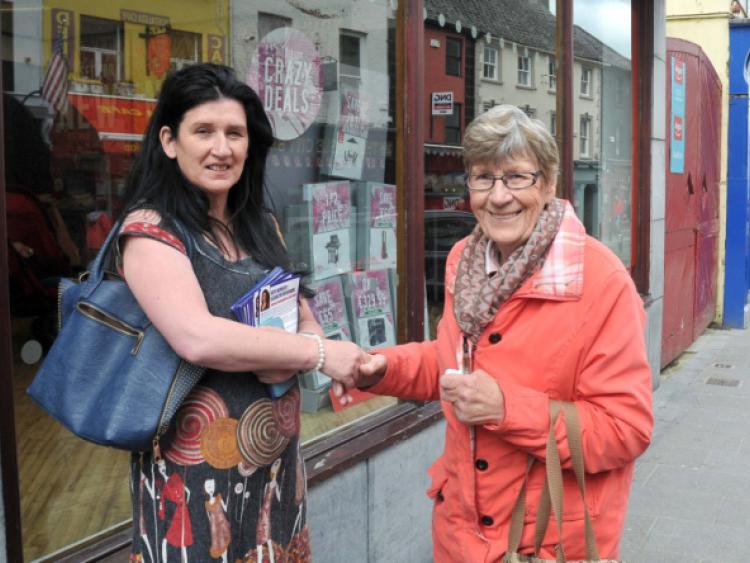 A vote for the established parties will mean more of the same – cuts and taxes – and will leave ordinary people without a voice, warns by-election candidate Elizabeth Hourihane.

A vote for the established parties will mean more of the same – cuts and taxes – and will leave ordinary people without a voice, warns by-election candidate Elizabeth Hourihane.

We are canvassing on High Street, Kilkenny City on Thursday morning last. Elizabeth is a law graduate from University College Cork, and is a member of the National Citizens Movement – a new grassroots political movement.

“We are all ordinary people who have never run for election before,” explains Elizabeth.

“We are challenging the political system for the reform we didn’t get.”

Paddy Cody, from Ossory Park, is among the first to be canvassed. He tells Elizabeth that what’s needed is social housing, and investment in local communities.

“Tourism is all right, but it’s not for the ordinary people,” he says.

Elizabeth says that the housing situation at present is a ‘humanitarian crisis’. Her issues include taking control of Ireland’s natural resources. We are, she says, too dependant on Foreign Direct Investment, and need to utilise what we have to grow our domestic economy.

“We want our national resources to benefit the people of Ireland,” she says.

“Not political parties to be used as leverage in relation to favours and stuff like that. We want the cronyism stopped.

Elizabeth feels that indigenous industries such as fishing and agriculture have been hit hard by our membership of the European Union. She would like to see Ireland exit the EU, and is calling for a referendum on the issue.

“In 1973 when we went into the European Union, we had 240,000 people working in the agricultural sector, which is 25% of the workforce,” she says. “It’s now less than 5%. That has a knock-on effect. That has decimated the jobs situation in relation to rural Ireland.”

I ask Elizabeth what the big issue coming up on the doorsteps is.

“The number one thing people are saying to us is that they have no say,” she tells me.

In Market Cross shopping centre, Martin Muldowney says he hasn’t made up his mind who he’s voting for yet, except that it won’t be Fine Gael.

“I’d be open to a new party or candidate,” he says.

Public sentiment like this is good news for the National Citizens Movement. Elizabeth is fiercely critical of the whip system and what she sees as a lack of proper representation.

“The whip system has eroded democracy completely,” she says.

“You are voting for a candidate in your local area, Carlow or Kilkenny, and their first allegiance is to the whip or leader of the party. It’s not to the people. And that’s what’s going wrong in this country.”

It’s this that Elizabeth will hope to change come May 22. She believes the people of this constituency will support her message.

“The people of Carlow-Kilkenny are going to show this Government that they have had enough of austerity,” she says.