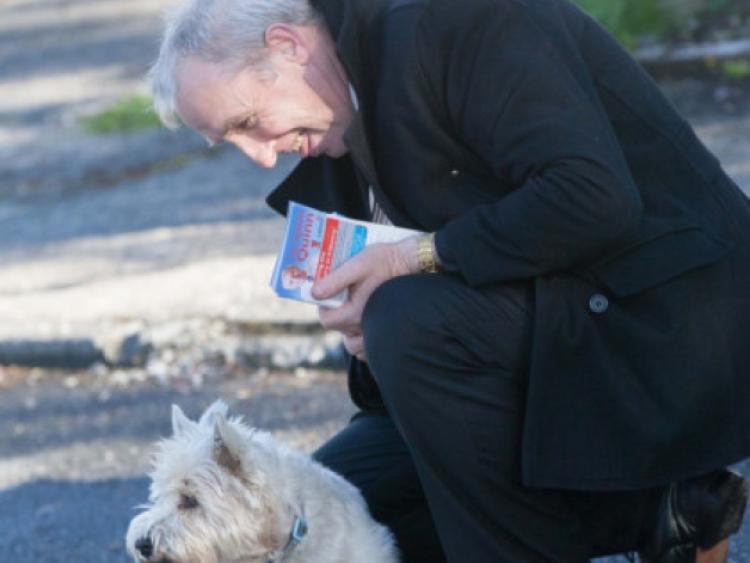 The pain which comes from a family suicide is etched across the face of Labour Party c andidate for the Carlow-Kilkenny by-election, Willie Quinn’s face as we walk around Ardnore in the Loughboy area of Kilkenny city.

The pain which comes from a family suicide is etched across the face of Labour Party c andidate for the Carlow-Kilkenny by-election, Willie Quinn’s face as we walk around Ardnore in the Loughboy area of Kilkenny city.

Last year he spent 24 days searching along the banks of the River Barrow looking for the body of his 73 year old uncle who took his own life.

He has not spoken before about it and the matter was raised by this reporter having heard him discuss the issue of suicide with a householder on the canvas who was badly affected by a similar family tragedy earlier this year and while she is coming to vterms with it her husband has she said, bottled up his emotions.

She gace the graphic details of the aerth shattering event and Cllr quinn respondeed.

“He went missing on March 3 and he had retired from Egnald with his wife and he found it hard,” he said.

He said they had no children and the tragedy had come asa complete suprise to him and all the rest of the family.

One of his major gripes with the government, which his aprty forms is that moeny is not being spent in the right places

“The mental health service has to be improved and made more user friendly,” he said.

“I hear the stories on the doorstep becaue they see it on my leaflet and I feel I then can then talk about my family’s story,” he said.

He wants all the staff shortages in the mental health service addressed now and says that the service hads to be properly resourced to help all the people in trouble at present.

The events of Spring 2014 have stayed with him and copperfastned his commitment to pushing governmenttotsckle suicide head-on.

Unemployment is another big issue on the doosrtep and one man in Loughboy who has been out of work since the company he worked for went under two years ago, said he can’t get a job at 54..

“We are doing our best and onlyyesterday, Minister for Education, Jan O’Sullivan, announced 369 new free places for jobseekers in Carlow IT.

“The new places, which are part of the Springboard+ programme include courses on International Financial Services to skills in manufacturing.

He said data from the Department of Social Protection shows that 74% of Springboard+ participants from between 2011 and 2014 are now no longer on the Live Register.

history over the water charges. Im paying wqter charges for the last 20 years, we are all paying. Bily Brodserick was well disposed towards

The other message on the doorstep is that he was trying to get across is the fact that unemployment has dropped considerablty in Carlow/Kilkenny over the last two years ands whgile the upturn in the economy hasn’t impaced positively on everybody, he feels that more employmwnt is good for everyomne.

He said figures released recently by the Central Statistics Office show that unemployment is continuing to fall in the Carlow/Kilkenny. it has s reduced by 10% in Carlow and by 13% in Kilkenny. 2This shows we arem oving in the right direction and that full employment is achievable if we continue to right bakance between investment and keeping control of the purse strings.