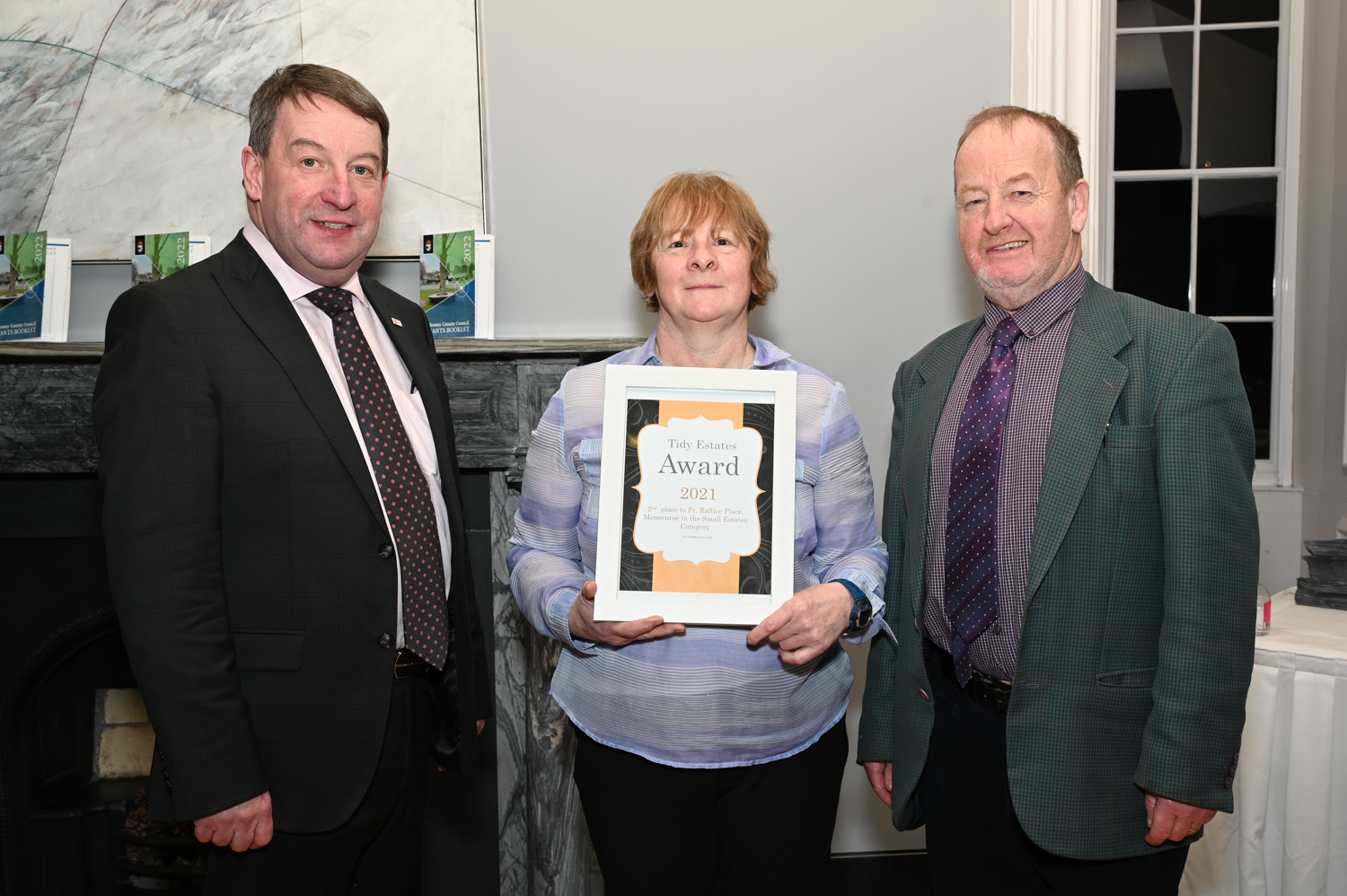 The tireless work of Kilkenny communities who showed endless dedication to projects in their towns and villages were applauded at a big awards ceremony.

Kilkenny County Council welcomed people from neighbourhoods and groups all over the county when they held their Community Awards Night in the Parade Tower at Kilkenny Castle.

“Community organisations play a key role in driving the overall prosperity and wellbeing in every city and town, in every county across the country,” she said. “Kilkenny has a strong tradition of community co-operation and collaboration. It is important to recognise and reward those communities who come together to work with the Local Authority and state agencies to contribute to this prosperity.

Great work
“It has been a very difficult two years for all but despite this it is great to see communities continue to do great work in Kilkenny,” she continued.

“The Community Awards event gives us the opportunity to pay tribute to you - groups and individuals - who make a real difference and a valuable contribution, who go the extra mile and provide example and inspiration to others. We congratulate you, along with all other community groups within the county.”

The popular Kilkenny Co Council Grants Booklet was also launched on the night. Now in its fifth edition the booklet, which is also available to view online, will allow people to access grant details on their mobile phone, home computer and with other remote devices. This year’s booklet summarises the key elements of Kilkenny Co Councils grants with relevant contacts and the types of works eligible for funding.

Kilkenny County Council CEO Colette Byrne also made a presentation on the night, giving an overview of projects that were completed and underway throughout the county. She congratulated all the groups for all the great work in their local communities and for those who also assisted on the ground in helping the most vulnerable during the pandemic.

Awards
Awards on the night were made to the following - Pride of Place, Tidy Towns and Tidy Estates.
Pride of Place Awards

The IPB Pride of Place, is an all-island competition that rewards people and groups who come together to shape, change and improve daily lives in their communities.

Three communities represented Kilkenny for the 2021 competition - Windgap Village, the Older Persons Council and the KCAT Arts project. While the national event was postponed last year due to the pandemic the Kilkenny groups will have a day to look forward to when the rescheduled event in held in Killarney on May 16.

The Older Persons Council will compete in the Community Wellbeing category. Since July 2020 the Kilkenny PPN, in conjunction with the Kilkenny Older Person’s Council, has overseen and managed the delivery of Age Friendly tablets which are specifically designed to facilitate digital connection for older adults as well as mitigate social isolation which became more pronounced since the pandemic.

Within this pilot scheme tablets have been provided to pilot groups and individuals around the city and county in Kilkenny with on average three to four users at each location receiving a tablet. With over 34 tablets presently in use, these tablets are provided to a host group and that host group supports the user to become confident and competent in using the tablet.
This is a partnership approach where the Kilkenny PPN is working in conjunction with the Age Friendly network, Family Resource Centres, the Social Prescribing Programme Co-ordinator, the ETB and the HSE.

KCAT Callan has been nominated in the Creative Space category. KCAT - which stands for Kilkenny Collective for Arts Talent - is an arts centre which has been in operation for 21 years. Over that time a community of creatives and artists has grown in reputation both nationally and internationally.

Kilkenny’s third entrant is Windgap, which will feature in the Village category. In recent years a coming together of the various strands within the community has seen a revival within the village and this vibrant community spirit has enabled this community to embark on many exciting projects.

Tidy Towns
Four groups were honoured in the Tidy Towns awards.
Keep Kilkenny Beautiful, is the tidy towns group for Kilkenny City which was established back in 1980.
The committee works in partnership with the city’s communities, council, businesses and voluntary bodies, enhancing the city and creating a wonderful place to live. Kilkenny City has won the overall national Tidy Towns title twice, in 1985 and again in 2014

Inistioge Tidy Towns are the oldest tidy towns group in the county, competing in the competition for over 67 years.
The village represented Ireland in the Entente Florale competition in 2018 and received a gold medal. The Community Awards Night celebrated Inistioge being awarded their first gold medal in the national tidy towns competition.

Tullahought Tidy Towns first joined the competition in 1991. Through the work of the committee and local residents have transformed the village by nurturing local features and taking on some ambitious projects like the building of the Viewing Tower.

Tullahought Tidy Towns promotes its rich local heritage and is an active participant of Heritage Week annually.
Although relatively new to the competition Listerlin Tidy Towns won the County Endeavour Award in the national towns competition as they improved their marks by 7% on their previous entry, the highest percentage increase in the county. They also scooped the South-East regional Covid-19 Community Award.

Tidy Estates
At local level, Kilkenny County Council Tidy Estates Competition aims to encourage residents to take an active role in improving the physical appearance of their estate.
The winners of the 2021 competition, under the large, medium and small estate categories, were: