A KILKENNY-BASED sports fantatic has used his custom-programmed robot to precision line seven playing pitches which will be a hotbed of activity for the long-awaited Renault GAA World Games 2019 at the Sports Campus of Waterford Institute of Technology in Carriganore from this weekend.

It’s the first time ever that playing pitches in Ireland have been marked using the Intelligent Marking www.intelligentmarkingireland. ie robot. The major international festival and celebration of Gaelic Games will feature as many as 97 international teams and a record-breaking 1,300 players. Lining pitches for the games could have been a major undertaking for the WIT Arena staff, as the lay-out, size and markings are a lot different to the standard Gaelic Games spec.

Intelligent Marking Ireland’s Mícheál Nolan lives in Clara, Co Kilkenny  and is heavily involved in the local club where he coaches juvenile players as well as the club's intermediate camogie team. 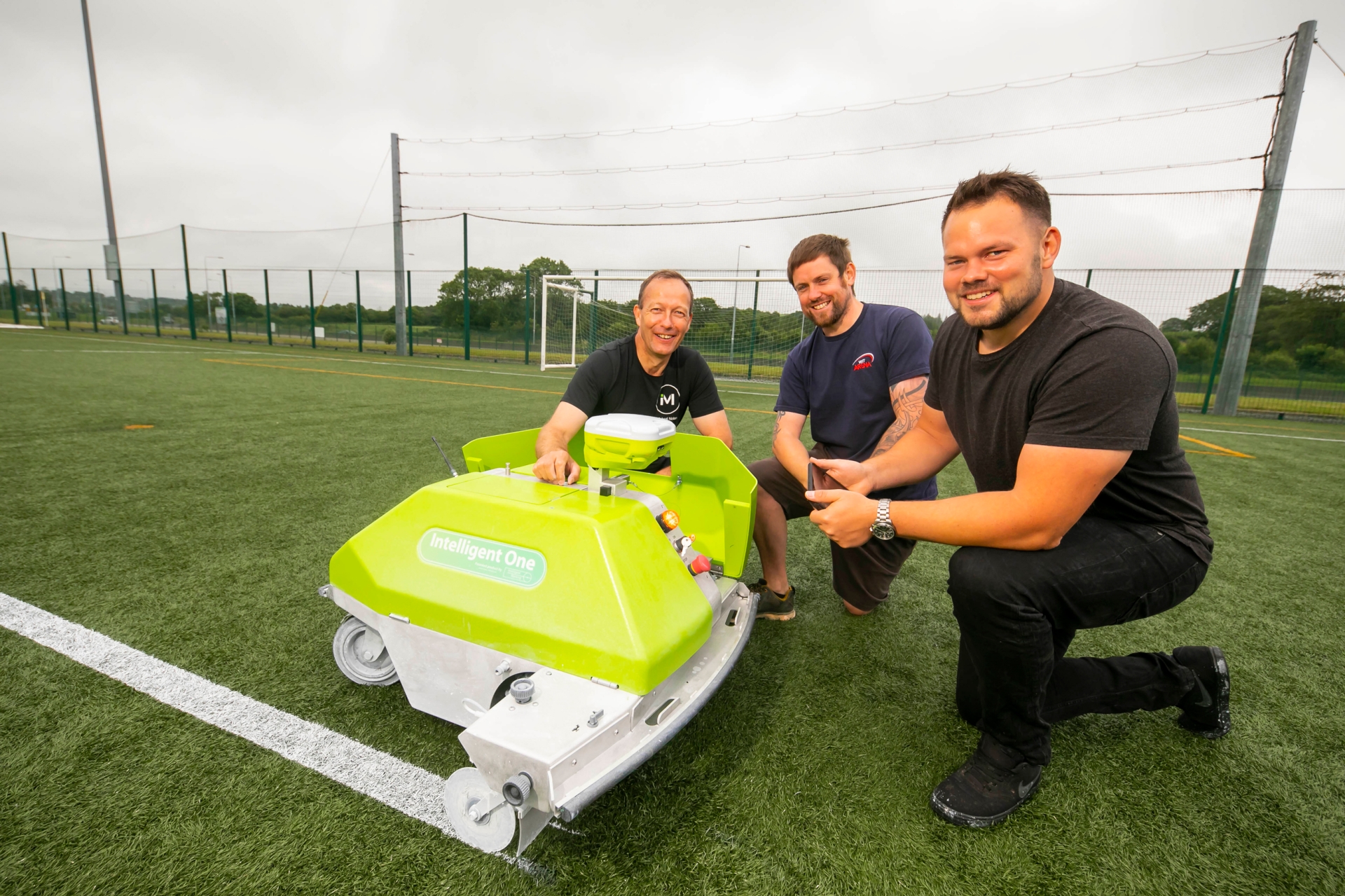 Micheal brought the company’s Chief Technology Officer, Stefan Thilemann, from Denmark this week to oversee the line-marking of the WIT Arena pitches. “It typically takes two people between 3 and 5 hours to initially mark a GAA pitch. Our technology did it in less than an hour.

“Lining seven pitches from scratch, some of them on Astro, and getting all of the markings and specs perfect would have taken the WIT Arena team approximately a week. It would have been a nightmare and would have held up the entire grounds staff.

“Setting the system up and inserting the required programme onto the tablet and lining the entire WIT Arena campus took only a few hours. We walked away for the rest of the day and let the robot do its job.

“We custom-built the layouts very quickly for this landmark event. Lining pitches with a robot is a first for Waterford and a first for the GAA and we are privileged to be supporting the preparations for such a fantastic event. Our system is available to buy or lease over a 5 year term and qualifies under the Sports Capital Grant programme,” Nolan said.

WIT Arena’s David Grant said: “It is an honour and a privilege for us to host the World Games. We’ve put months of work into ensuring every playing surface, every blade of grass is just right.  It would have taken our team up to a week to mark the pitches. The Intelligent Marking Ireland system had everything done in a day. The lines and the various markings aren’t just right. They are absolutely spot on.  There are big plans for the WIT Arena and we’re planning on investing in our own Intelligent Marking robot so we can focus our attention on other work while it marks the required lines on the various playing surfaces for us into the future.”

Headquartered in Denmark, Intelligent Marking is the developer of the world’s premier autonomous line marking robot, which lines pitches using a pre-programmed robot, GPS sub-station and a tablet device. The ‘Intelligent One’ model used in Waterford uses patented technology that allows the robot to line any pitch with sub-centimeter accuracy.

Intelligent One will be a Godsend for contractors, for colleges, universities, large sports facilities or any sporting facility that regularly has to repaint lines. The autonomous system frees ground staff to do other work and can operate in all weather conditions – including in the dark. Another huge benefit of using the system is its ability to quickly and effortlessly go from one pitch layout to another at the push of a button. It also makes last minute adjustments to the layout possible so grounds managers can shifting the pitch in any direction to avoid heavy wear and tear to keep the grass surface in pristine condition.

Intelligent Marking’s Stefan Thilemann said the system is being used by sports grounds across the globe. “It’s pre-programmed for at least 50 different field lay-outs but we’re increasing this offering all the time. It’s simple to use while allowing users to customise the layout exactly according to their needs.

“It weighs just 60kg, takes up no more space than a typical push mower and is easy transportable in a normal van or estate car. It can even be driven up ramps for easier transport. Being a company that has always focused on making line marking a more manageable and enjoyable task by employing state-of-the-art technologies it is very rewarding getting feedback on the system as customers acknowledge the burden the system is taking away from them making them much more effective.  ”