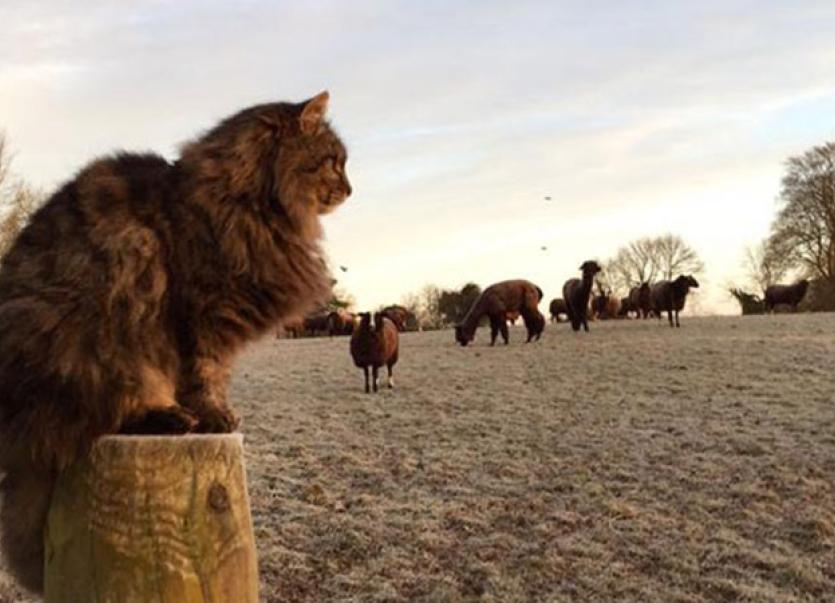 Bodacious, the cat shepherd at work in Bennettsbridge

An extraordinary Kilkenny resident has just secured a world-wide book deal for her writings about an orphaned cat.
Suzanna Crampton lives in the idyllic setting of Maidenhall, just outside Bennettsbridge where she farms with the help of a ‘shepherd cat’ named, Bodacious.
She has been writing about him for the last four to five years and now HarperNonFiction have bought the rights to her work and will publish ‘Bodacious: The Shepherd Cat’ on June 14, 2018.
The now famous feline appeared in Crampton’s life after she found him wandering around a shop in Kilkenny city.
“A friend told me he needed to be rescued so I picked him up and decided to hold onto him until he was reclaimed,” Suzanna said.
The book is told from 'Bodacious' perspective, taking readers through a year on the farm, highlighting his deep bond with Suzanna.
Her grandfather was, the late Hubert Butler, one of Ireland's greatest writers, whose seminal works are as relevant today as they were when written 70 years ago.
“The farm has been in our family for seven generations. My mother still owns the land but has never farmed it,” Suzanna said.
My grandfather was a writer and market gardener more so than a farmer, so he turned some fields into orchards and rented the bigger fields,” she added.