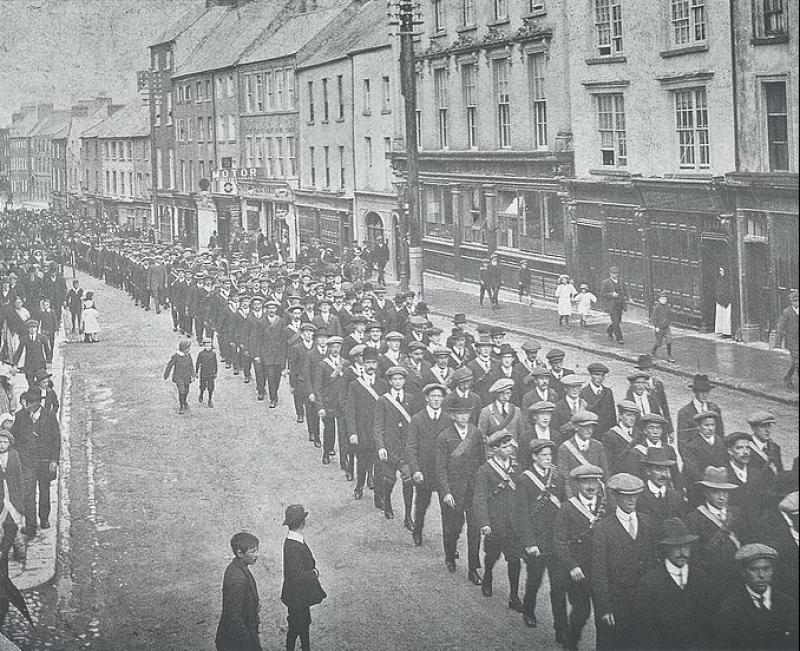 The ‘Conscription Crisis’ which occurred during the spring of 1918 is arguably the only time in Irish history where the vast majority of the general public were singing from the same hymn sheet. There was widespread agreement that Irish men between the ages of 18 and 41 should not be compulsorily drafted into the much depleted Irish regiments of the British Army to fight in the First World War. Thousands of Irish people had already died, including over 500 people from County Kilkenny or with Kilkenny connections.
XIn exploring this period of early 1918, it should be remembered that history should never be read backwards. That is to say, few people could have envisaged in the first months of 1918 that the war, which had dragged on for nearly four years at this stage, would be over by November. In March 1918, following a German offensive, victory for the allied forces in the First World War looked far from assured. Indeed, it was perceived by some that the Germans were now most likely to win the war – thus, more troops were badly needed at the Front. Furthermore, the high prices farmers’ were receiving for their produce because of the war meant there was little economic necessity to enlist. Hence, extending the draft to Ireland (it had been in place in Britain since 1916) was considered a priority for the British government.
If the 1916 Rising set the course of Irish history on a different trajectory, the Conscription Crisis of 1918 was the event that really cemented Irish public opinion under one banner. The major competing groups and organisations that made up the different stratas of Irish society were all against conscription. These included the Catholic Bishops of Ireland, including Bishop Brownrigg of Ossory who opposed it; the labour movement as a whole were also vehemently against it (there was a nationwide strike, which included County Kilkenny, in April); the vast majority of Kilkenny Councillors, both urban and rural, objected to its introduction. In addition, the Irish Parliamentary Party, Sinn Féin, Cumann na mBan, and the suffragist movement were all opposed to conscription. The Conscription Crisis was also the beginning of the end for the Irish Parliamentary Party (IPP), coming just weeks after the death of its leader John Redmond. It can therefore be seen as the crucial moment where the majority of Kilkenny people switched allegiance from the nationalist IPP to Sinn Féin.
The direct result of the conscription scare was a huge upsurge in the number of men joining the Irish Volunteers organisation in protest against conscription. The year 1918 could be regarded as ‘the year of the Irish Volunteers’. The membership of the Irish Volunteers in Kilkenny City quadrupled in the month of April alone. In total, the number of Irish Volunteer recruits in County Kilkenny increased from approximately 700 before the conscription crisis in March 1918, to around 3,500 by the summer of 1918. Instructions were issued by Volunteer leaders in Kilkenny for guerrilla tactics if the British military tried to enforce conscription. They were very badly armed of course, relying on locally sourced shotguns, and obsolete Italian rifles that had been imported in 1914 by John Redmond in opposition to the UVF in Ulster. The volunteer companies throughout the county experienced a similar uptake. Tim Hennessy, a Volunteer captain who was living in Ennisnag, said that ‘new Companies sprang up mushroom like’.
During the month of April 1918 - the month it was feared the military draft would be enforced by London - anti-conscription meetings were held all over the county, including a monster meeting on The Parade in Kilkenny. ‘Several thousand people’ attended this meeting, which was addressed by four priests. An estimated 5,000 people attended an anti-conscription meeting at The Square in Castlecomer on Sunday, 28 April 1918. In Graiguenamanagh and Inistioge, local volunteers were assigned to collect signatures for the anti-conscription pledge. The pledge was similar to modern day petitions, with the signatures against conscription collected after Sunday Masses throughout the diocese. It was a similar story in Thomastown where ‘practically all the men in the parish…have taken the anti-conscription pledge’. Ned Aylward from Callan, who was a pupil and boarder in Saint Kieran’s College in Kilkenny City, recounted how all students were allowed to return home ‘to make their own arrangements [to oppose conscription]’, with many of these joining their local volunteer company.
The influential editor of the Kilkenny People newspaper, ET Keane, left no doubt as to his position. In a hard-hitting editorial on 13 April he saved most of his fury for the Irish Parliamentary Party who had supported the British government in the war effort in 1914, but who were now against conscription. He also stated:
‘The debate which took place in the British House of Commons on Tuesday [9 April 1918] on the introduction of the measure which proposes to force 200,000 Irishmen into the Army was, as far as Ireland is concerned, one of the most pitiful exhibitions of muddled ineptitude, hopeless incompetence, and pure unadulterated funk that has ever made any nation ashamed of those who professed to speak in its name in a crisis of incalculable magnitude and gravity.’
In May, some 1,500 women joined the protest; they proceeded from the Callan Road to the Dominican Black Abbey in Kilkenny City while reciting the rosary, before signing the anti-conscription pledge at City Hall.

North Kilkenny Battalion
At the peak of the Conscription Crisis, the North Kilkenny Irish Volunteer Battalion held a large ‘manoeuvre’ on Sunday, 12 May 1918. All Companies converged at The Swan, the only part of County Laois in the Kilkenny Volunteer Brigade. There was a large mustering of 393 men. They were instructed by their Battalion Commander George O’Dwyer, along with the nine individual company captains. All the companies then ‘fell in’ and marched to Clogh Church, in the far north-east of Kilkenny, where they attended 12.00 pm Mass. A separate Mass had to be held for the local parishioners in a nearby school, such was the overcrowding in the church. Afterwards, the men moved to a large field in The Swan which was known as ‘the Camp’ for the day. On their march through the Kilkenny countryside, some locals ‘clapped their hands and cheered’, others ‘smiled with friendliness’, while some ‘sneered with sarcasm’. At their ad-hoc training camp, the Volunteers engaged in ‘manoeuvres and sham battles’. They were dismissed after 6.00 pm and each company trooped home separately while singing marching tunes such as The Soldiers Song (which was later translated into Irish, becoming the country’s National Anthem). Most of the men had marched a cumulative distance of 30 kilometres or more.

Faded Away
Although conscription had ‘brought new life and energy’ to the volunteer movement, many of the new recruits simply faded away once the threat had passed. Simon O’Leary, Captain of the Paulstown Company, described the situation in his unit during the crisis:
About 1918, there was a terrible [big] crowd. There were 90 men the time of the conscription scare. They dwindled to 25 or 30, I think [after the scare], - the active lads who would do the work for you.
Although membership dropped to more manageable levels after the fear of conscription had passed, the crisis did galvanise support for the separatist/republican agenda. For many, the threat of conscription was the final straw in any support for the war effort or the Irish Parliamentary Party.
On 18 May 1918, there was a major roundup of leading Sinn Féin and Irish Volunteer members in Kilkenny under what became known as the ‘German plot arrests’. This occurred throughout Ireland when Sinn Féin members were arrested and interned in response to an alleged treasonous conspiracy involving Germany, which was later found to be false and invented by the administration in Dublin Castle. Peter DeLoughry (head of the IRB in Kilkenny), Tom Treacy (Captain of the Kilkenny City Volunteers), and notably the sitting MP, WT Cosgrave, were arrested and sent to prisons in England.

Crackdown
The authorities also became severe in their hostility towards Irish Volunteer drilling in the county. For instance, at Castlecomer in July 1918, John Fleming and Martin Delaney were charged with ‘illegal drilling and unlawful assembly’ and sent to prison for two months.
In the same month, similar arrests for prohibited drilling took place in Graiguenamanagh. One Volunteer sounded the church bell when the raids were taking place in the town which allowed many in the area to escape arrest. A baton charge by the RIC on crowds gathered at Thomastown Courthouse protesting against some of these arrests caused a great deal of bitterness towards the police in the area. In October 1918, RIC District Inspector Moylan recommended charging 16-year-old Patrick Holden of Callan for defacing a British Army recruitment poster in the town, although he admitted that there was little chance of Holden being found guilty as ‘the local justices at Callan [Petty Sessions] are more or less in sympathy with S.F. [Sinn Féin]’.
The actions of the authorities and police over the summer and autumn of 1918 had the effect of dramatically increasing public support for the Sinn Féin movement. This change in public attitude would be reflected in the ballot boxes just a few months later in December 1918, when two Sinn Fein TDs - WT Cosgrave and James O’Mara - were returned for the two Kilkenny constituencies. After the Conscription Crisis of 1918 the metamorphous in public opinions was complete; the fight for independence was now just around the corner.