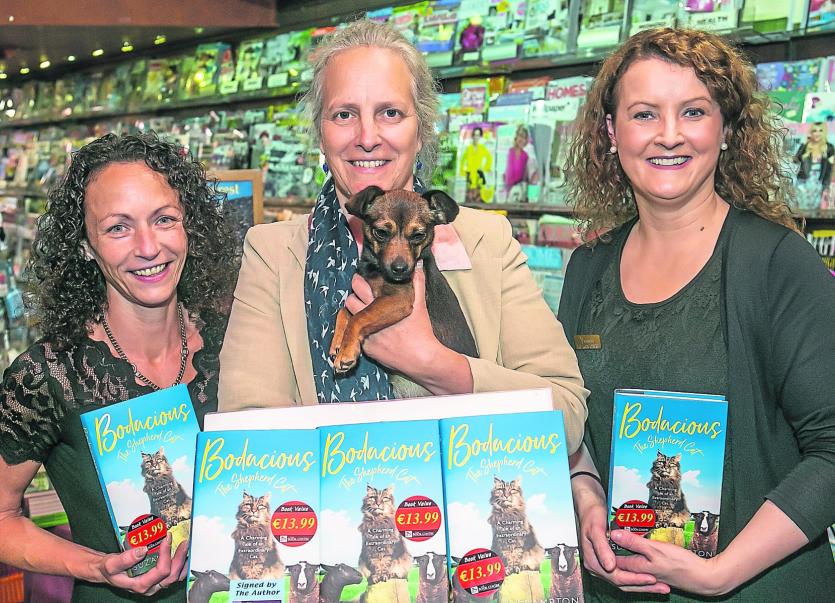 Suzanna Crampton with Maggie Dreeling and Yvonne O'Brien during the launch of ‘Bodacious The Shepherd Cat’ at the Kilkenny Book Centre PICTURE: PAT MOORE

The star of the new book, ‘Bodacious The Shepherd Cat’ didn’t bother turning up for the stellar book launch on Thursday at the Book Centre in Kilkenny City.
He doesn’t like adulation and stayed at home minding the farm animals while the woman who wrote the book, through his eyes and with his voice, Suzanna Crampton, made the necessary apologies for the cat who has taken the online world by storm.
Launching, ‘Bodacious The Shepherd Cat,’ broadcaster, Helen Carroll guaranteed the audience at The Book Centre that it was the only book in which Madonna, Sean Penn, Lou Reed and the Clonmel Agricultural Show were all mentioned.
She paid tribute to the ingenuity and imagination of author, Suzanna Crampton for writing such a wonderful book which she described as an ode to farming and family.
“It documents the winding, twisty route Suzanna’s life took before it brought her back to a beautiful farm in Bennettsbridge and brought a bodacious little cat into her life,” Helen Carroll added.
“It’s a really lovely read and I couldn’t recommend it highly enough,” she added.
Bodacious tells us about life as The Shepherd Cat on Black Sheep Farm.
“I wasn’t always called Bodacious. I must have been called something else in my kittenhood in the nearby city of Kilkenny, but it’s all a bit of a mystery to My Human. As far as she’s concerned, I appeared one day and have never left. It’s a secret I plan to keep,” the book tells us.
Written by Suzanna from the perspective of Bodacious the cat, this is a beautifully written memoir of Bodacious’s life on the farm and everything that entails - early mornings, frosty starts, beautiful sunrises, adventurous rare-breed Zwartbles sheep, hard work, entertaining animals, mouth-watering food, kind people and idyllic country living with its highs and lows.
At the launch, Suzanna thanked her grandparents Hubert and Peggy Butler, Bennettsbridge (now deceased) and her godmother, the late PL Travers, the creator of Mary Poppins for her encouragement.