All My Sons brought joy to Watergate Kilkenny 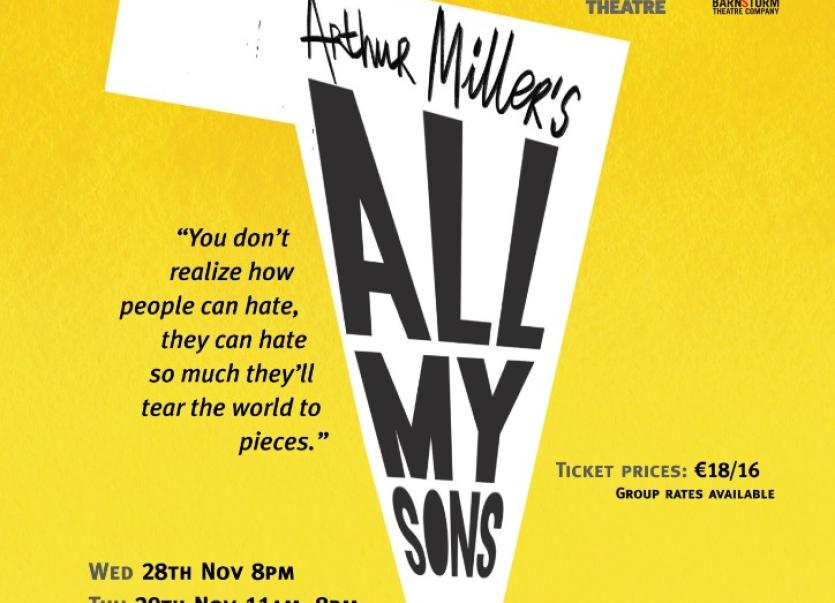 We are blessed in Kilkenny with a strong theatrical spirit.

This was brought home to me on Thursday night at the Barnstorm Theatre Group’s magnificent production of All My Sons by Arthur Miller.

Philip Hardy, in casting, made use of the talent from the pool of actors in Kilkenny and its environs.

This was a tight, gritty and absolutely enthralling production of one of the great plays of the 20th century.

All My Sons is a gripping drama that brings home the benefit of providing high quality work and emphasises how live theatre is far better than any TV box set.

It revolves around a successful small-town family haunted by one son’s disappearance during World War II and also by the shadow of a scandal.

Aoibhín Murphy as Ann Deever and John Prendergast as Chris Keller were for me, impeccable.

Their on-stage chemistry, subtle mannerisms and love of the text was joyous and they were so believable.

Obviously, they were facilitated by the man who has had more on stage personas than Laurence Olivier, Brendan Corcoran.

As the fallen patriarchal character he was, as usual, effortlessly perfect in the role.

Equally assured and enthralling was Mags Whitely as his wife and she brought that sense of fragility to the play.

Dee Gibney was fantastic as the vixen-like neighbour and her on-stage husband, Dr Jim was also perfect in his role.

Although only on the stage for a short time, both Natasha Murray and Shane O’Keeffe almost stole the show.

Lighting and design were great thanks to Gerry Taylor along with Vincent Dempsey and Ger O’Reilly.

And a special word to Clare Gibbs who was in charge of costumes which were time and dress-sense perfect. Let’s hope that we have another high quality joint production next year.