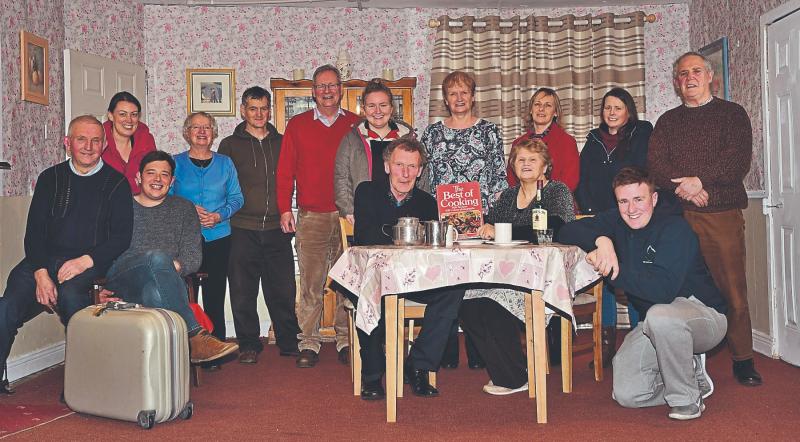 The Kilquan Players Drama Group are back in action!

The cast and crew are busy putting the final touches to their 27th production, Jimmy Keary’s comedy, Love Thy Neighbour.

The drama is a comedy but with serious undertones - it’s about love, lust, middle age crisis, bribery, corruption, marriage and revenge.

The Players have performed many different types of plays throughout the years including The Field, The Year of the Hiker, Big Maggie, White Headed Boy, Many Young Men of Twenty, I’m The One For You and Poor Jimmy.

This year’s production is directed by Benny Mills, a resident of Leighlinbridge. Originally hailing from Mullingar, Benny has previous experience of acting and has directed a number of plays in the past.

There are many members involved with Kilquan, without whom each production would be impossible. From Fr Wallace for the use of the hall to the back stage team of prompters, maintenance, stage production, make up and costume design, to the front of house, sound and lighting system, kitchen volunteers and ticket sellers many hands go into each production.

This year’s show sees the return of several Kilquan stalwarts. Coming back are Coon’s Patsy Darcy and his daughter Aine Murphy together with Teresa Healy and Maria Purcell. Carlow’s Tom Murphy, Anne Tunstead, Caroline Comerford and Brian Fitzpatrick, and not forgetting John Kavanagh from Ballyragget, will also tread the boards again.

The drama is set in the living room of the Mullen farmhouse where Michael Mullen’s marriage is going through a rocky patch.

It’s easy to see why as Michael, played by Patsy Darcy, is the not very romantic husband of long-suffering Noreen, played by Anne Tunstead. The couple has one son, Jason (Brian Fitzpatrick), an engineering student who has big ideas, no fondness for study and an eye for the ladies.

Tom Murphy plays the part of Charlie Mullen, Michael’s brother who detests work but likes easy money. John Kavanagh and Teresa Healy are in the roles of detective garda Claude Nolan and his snobby beautician wife, Ingrid, while Caroline Comerford plays the part of their daughter, Kelly.

Meanwhile, Maisie Looney (Maria Purcell), is a larger than life woman who has an eye for Charlie. Dolores Coffey (Aine Murphy) is a determined and no-nonsense friend of Noreen’s.

As usual, all proceeds from the production will go towards various charitable organisations. Don’t forget to keep the nights free, and join the Kilquan Players for their show and chat with refreshments following the shows.