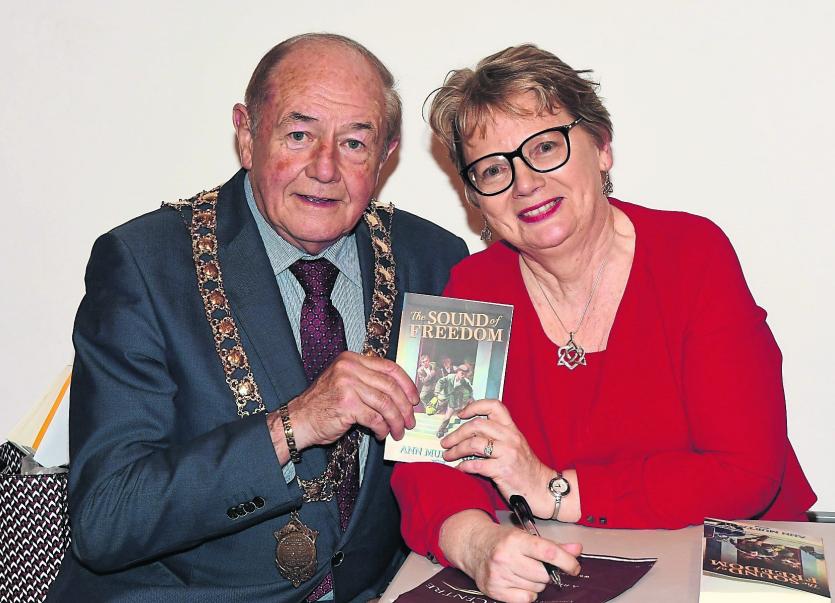 Mayor Martin Brett has his copy of The Sound of Freedom signed by the author, Ann Murtagh, at the launch of the book in the Medieval Mile Museum, Kilkenny PICTURES: HARRY REID

The Medieval Mile Museum was the setting for the uplifting launch of Ann Murtagh’s novel, The Sound of Freedom, on Sunday.
Mags McGrath, MC welcomed the big crowd who attended. Mayor Martin Brett and John McGuinness TD were among those present.
Guest speaker Fin Dwyer (Irish History Podcast) spoke about the book and was particularly impressed by the way Ann used primary history sources in her story.
He commended Ann for the meticulous research undertaken and praised her ability to make such complex history accessible to young readers.
Freedom
Ann spoke about the central theme of ‘freedom’ in the book from the bigger picture of freedom of a nation down to the ‘up close and personal’ freedom of 13-year-year old narrator, Colm Conneely.
Following the recent RIC controversy, Ann informed her audience that she no longer has to explain who the RIC were! She went on to describe her experience of getting the phone call from Michael O’Brien of O’Brien Press to say that they were going to publish her book.
Ann thanked various people who supported her along the path to publication, including her husband, Richard White.
She dedicated the reading from her book to her former school community at Kilkenny School Project who provided feedback and comments that were crucial to the editing process before submitting to the publisher.
The school still welcomes Ann back to do workshops and readings and she believes she is ‘the luckiest children’s writer’ to be able to do this.
The Sound of Freedom published by O’Brien Press is available for sale in The Book Centre, Khan’s Book Shop and the Medieval Mile Museum.