Golden Ticket for number one music fan in Kilkenny 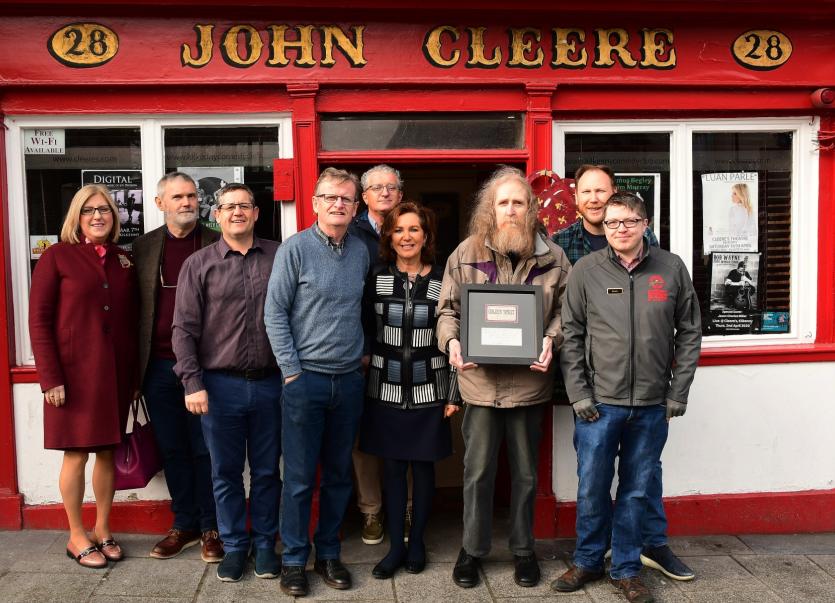 On Friday, the city’s biggest music fan was stunned when he received a golden ticket in Cleere’s of Parliament Street, Kilkenny.
The honour came a day before his 70th birthday and comes after 9,000 gigs and concerts over more years than he cares to remember.
It means that for the rest of his life, music mad Eoin McDonald will not have to pay for any gig in Cleere’s, whether its for The Smithwick’s Roots Festival, Tradfest, The Cat Laughs, Kilkenny Arts Festival or any of the regular gigs in the popular spot.
He was taken by surprise by the honour and was hoodwinked into going to the public house on Friday morning by his friend, Paul Campion, who framed the golden ticket.
“I will treasure this it means a lot and I really can’t believe it,” he said.
Accompanied by his cousin, Simon Walsh, he never left the ticket out of his hand and said he will treasure it for the remainder of his life.
The idea of the ticket came from co-manager of Cleere’s Johnny Holden, from Waterford, who said that it was fitting to honour a man who had been such a positive force in music and who had supported so many local bands throughout the years.
Paul McCabe, co-manager of the hostelry agreed and said he hoped Eoin will get many years of use out of the lifetime ticket. “It’s the least we could do for him,” he said.
Eoin is understood to have the stub from every concert he has ever attended which means there are 9,000 stubs somewhere in his house close to St Patrick’s Church in the city.
And he always gets the first ticket to every gig he attended , with Number 1 or 01 marked on it.
Bring a quizzing mastermind, he probably knows exactly where each one is he if he ever needs to look them up.
John Cleere paid tribute to his old friend on Friday morning.
“Eoin has been a huge supporter of events in Cleere’s and Kilkenny city in general over the years.
He has an amazingly wide range of interests; music, theatre, ballet and opera and he attends them all.
“Whatever show is coming up, ticket Number 1 is put aside for Eoin and that is the way it will continue for many years to come,” he said.