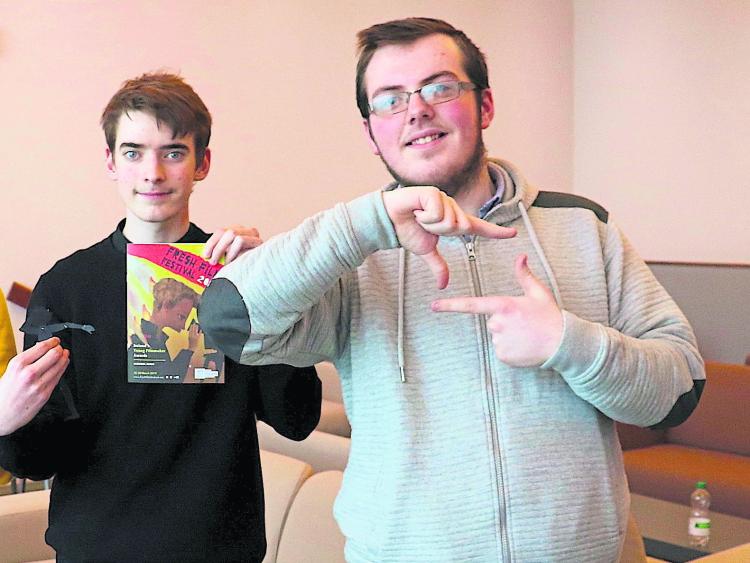 Matthew Moloney, 17 and David Moore, 18 from the National Youth Film Animation School, Kilkenny at the Leinster regional heats at the AXIS Centre in Dublin

Ireland’s Young Filmmaker of the Year has moved one step closer with Kilkenny artists to the fore.
The competition, which received a record of over 1,700 entries this year, announced which short films would move on to the finals at the Leinster regional heats, which took place at the AXIS Centre, Ballymun in Dublin, along with the Dublin regional heats at the Irish Film Institute.
Films by young filmmakers from the UK and the USA were also screened as part of Fresh International Film Festival’s International category.
Films screened at the Leinster regional heats included films from Kilkenny, Wicklow, Kildare, Wexford, Longford and Meath, whereas the Dublin regional heats focused mainly on films from Dublin.
Finalists from Kilkenny included National Youth Film Animation School, who have two films through to the final, A Tail of Revenge and Toothache with both films now up for contention for the Fresh Film Cartoon Saloon Animation Award.
The first film A Tail of Revenge is a claymation animation in which a rodent gets revenge on a policeman feline who locked him away in prison by David Moore, Caoilainn McGrath, Rachel Fitzpatrick and James McAlpi all aged between 14 and 17 years old.
Claymation
Another claymation animation Toothache, about a dinner date between a Narwhal and a Fox by Emma Harris, Anwyn Breen, Alana Connolly, Matthew Maloney, aged from 16 to 18 years is also nominated.
Aaron O’Dea
Other Kilkenny entries included 16 year old filmmaker Aaron O’Dea with The Government’s Plan a satirical take on Irish society.
“People in this society are kidnapped to schools and forced to bow to the authority,” he said.
“It follows the lives of the citizens of this world. One day a citizen discovers music and the hope of an improved and more fulfilling life becomes more prominent.
Aaron spoke about being at the heats as “really exciting and a fun experience.
“I have grown as a person and a filmmaker with this Festival,” he said.
“I am always so excited to see my films on the big screen and I am honoured to have made it through to the finals surrounded by such a talented group of filmmakers.”