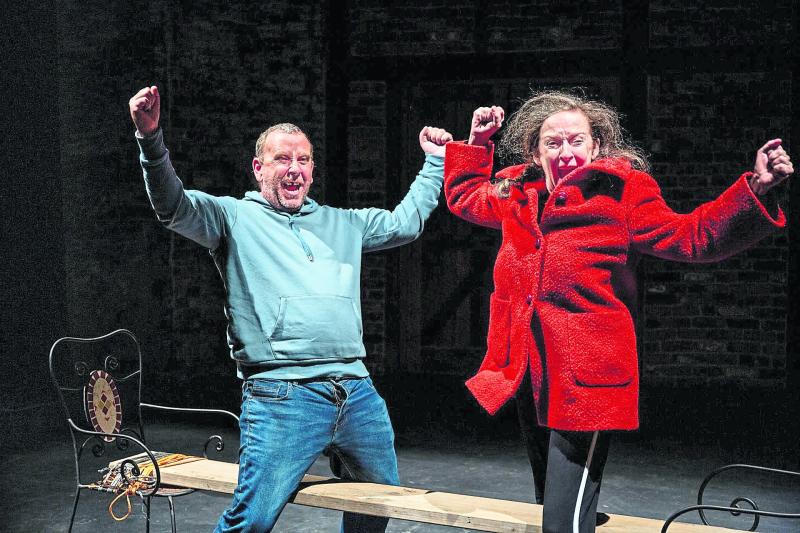 Flood, a play which is dark, extremely moving and often very funny, comes to the Watergate Theatre this Friday.

The work of Ger Bourke, Flood takes a look into the lives of Stella and Jack, a married couple in their fifties adrift in a small boat in modern day Ireland.

The rising water has knocked out all lines of communication, power lines. Electricity, television masts, phone masts and covered all stop signs. As they desperately bail water from their now sinking boat the interaction becomes frantic. Can anything be salvaged from a marriage that is literally and metaphorically; ‘on the rocks’ before it is too late?
Flood is directed by Jim Nolan, a founder member and former Artistic Director of Red Kettle Theatre Company and a former Writer in Association at the Abbey Theatre.

“Flood is an amazing piece,” said Jenni. “I’ve waited a long time to be in it. It is a joy...An absolute joy. This piece will blow your mind.”

Jack is played by Joe Meagher. Joe has been a professional actor for almost 30 years, working and touring extensively with companies such as Red Kettle, Corcadorca, Broken Crow, Bag-a-Cats and Rigout Productions.

A Million turns
This hilarious, dark twisted play takes you on a million and one turns throughout epic, endearing and true to heart performances. Ger Bourke’s beautiful lyrical script is brought to life by Jim Nolan’s expert hand.
Produced by Éadaoin Breathnach as a co-production of Rigout Productions and Bag-a-Cats Theatre Company. Supported by Waterford City and County Council, Creative Waterford, Art Links and The Imagine Festival.

Tickets
Tickets for Flood are available online at Watergatetheatre.com or from the box office, tel 056-7761674