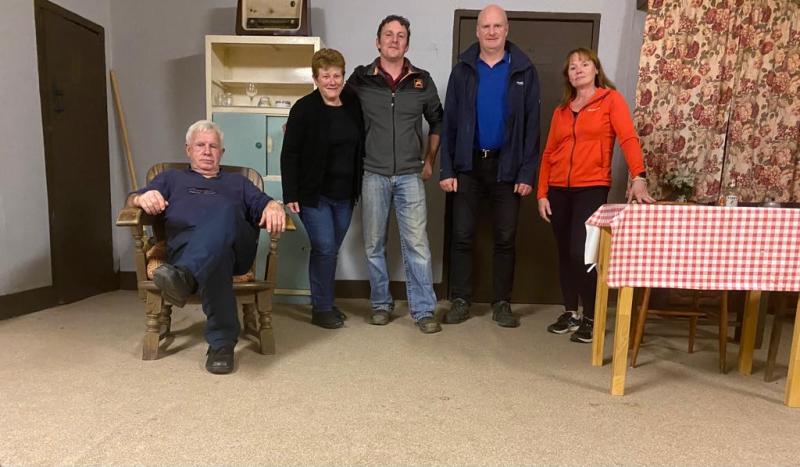 Pictured are the cast of 'The Banshee of Crokey Hill'

Shrughawadda Players are ready to stage their new play ‘The Banshee of Crokey Hill’ later this month in what promises to be great night of entertainment.
The play by Tommy Marren will run from November 23 to 26 at 8pm nightly at St Eoghan’s Centre in Kilmoganny. Tickets are €10 and are on sale in Pete’s Shop in Kilmoganny.
The play ‘The Banshee of Crokey Hill’ is set in rural Ireland in the early 1970s.It has received rave reviews in Ireland, England and the United States.Although steeped in hilarious Irish comedy it also has a serious undertone in which the soured relationship between a father and son manifests itself in most unusual circumstances.
Set in the McMahon household ,a house built on a fairy fort, black secrets and dark stories all prove that the Legend that the Banshee has put a spell on this house is true. It has all the ingredients from comedy to suspence and a sensational plot.
The cast includes Stephen Gilmore who plays the returned son Mickey McMahon. Biddy Hawe plays the local character Molly Andy, Willie Kearney plays the hard man Jack,and Jackie Kennedy is his forever suffering wife Kathleen. Bryan Daniels is Mickey’s friend since childhood . Olivia Reide plays some lovely Trad music at the Hooley in the kitchen while Joan Brennan and other locals join the party.
The play is directed by Alycia Kearney while Jackie Kenneally and Marie Kelly are doing backstage and front of house and William Kearney, Stephen Gilmore and Willie Kearney are responsible for the set. Ciaran Moore is in charge of lighting and Richard Kearney is over sound.
Tickets are on sale in Pete’s Shop on (051) 648637 or call Alycia on (051) 648118 or
(087) 6757490 or Marie on (051) 648052 or (087) 6369850.