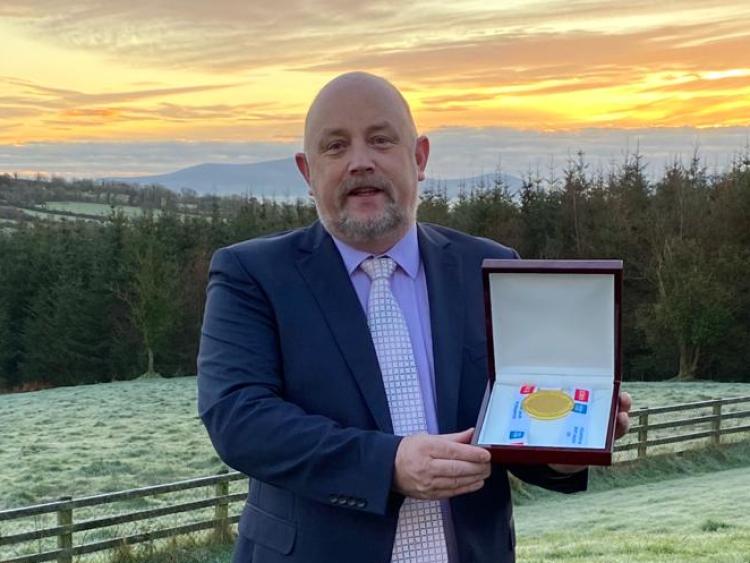 David Denieffe with his Volunteers in Sport award

A Kilkennyman’s dedication to athletics will be recognised this week with a national award.
David Denieffe’s service to Gowran Athletics Club has earned him the county award at this week’s virtual Federation of Irish Sport Volunteers in Sport awards.
Although he has only been involved in athletics for a relatively short time, Denieffe has made a huge impact on the sport both locally and nationally. With his home club Gowran enjoying a rejuvenation over the past five years, David is one of the members who has been at the forefront of the surge.
His skills in governance and policy writing have helped to put structure on Gowran AC and his work in the club has helped them to induct new coaches, increase membership across all age groups, and allow the club to act more strategically.
Mr Denieffe has also had an active role in the Kilkenny Athletics County Board, acting as competitions secretary and, more recently, as county secretary. With a passion for helping all clubs in the region he has been involved in Leinster Athletics for several years, starting off as a volunteer on competition days before becoming Indoor Competition Secretary, a role he still fills.
WORKSHOP
Most recently, David created a workshop for Athletics Ireland in which he discusses the key areas that clubs need to focus on to develop. He has delivered this workshop to more than 30 clubs to date and works closely with them after the workshop to help them create their own plans.
The Volunteers in Sport Awards were created to champion the contribution, commitment and dedication of the army of 450,000 volunteers across the country who go above and beyond by giving their time to Irish sport and physical activity each year. These volunteers dedicate some 37.2 million hours of volunteering across the country’s 13,000+ sports clubs and associations every year.
Towards the end of 2020, members of the public, as well as sports clubs and governing bodies were invited to nominate an individual whose contributions to sport has made a real difference to their community, club or county. The nominations and award recipients were selected by a judging panel consisting of 11 individuals drawn from sports administration, the volunteer community and media, including Paraic Duffy, former Director General of the GAA, RTÉ broadcaster Marie Crowe and CEO of CARA, Niamh Daffy.
“Sport plays a central role in the social fabric of every community in Ireland, yet it would not happen at all without the army of volunteers who dedicate their time and expertise across pitches, courts, tracks, pools and community halls across the country,” said CEO of the Federation of Irish Sport, Mary O’Connor.
“This year, more than ever before, we have seen just how essential the role of the volunteer is in our local communities and to this end, it will be an honour to be able to recognise so many of these volunteers at this week’s virtual Volunteers in Sport awards.
“I would like to extend my warmest congratulations to all of this year’s recipients, and also thank EBS for their amazing support in bringing the awards – and wider recognition – of volunteers in sport in Ireland to life.”
DEDICATION
“It is a real honour for me to help recognise so many fantastic volunteers in our community at this year’s virtual Volunteers in Sport Awards,” Minister of State for Sport and the Gaeltacht, Jack Chambers TD. “I have always admired the hard work and dedication that goes on behind the scenes in sport throughout the country, and it is a privilege to help celebrate so many incredible individuals who give their time and dedication to ensuring that sport in Ireland runs smoothly all year.
“Volunteers are often overlooked, but they are truly the backbone of sport in Ireland,” he added. “These awards are a superb way to recognise and honour their amazing contribution to their communities.”