Athletics- Plenty of medals and history is made

A glittering array of competition filled the week for Kilkenny athletes, who performed well at county, Leinster and national levels. And, with six weeks to the National Juveniles, training is being finetuned by the county’s rising stars 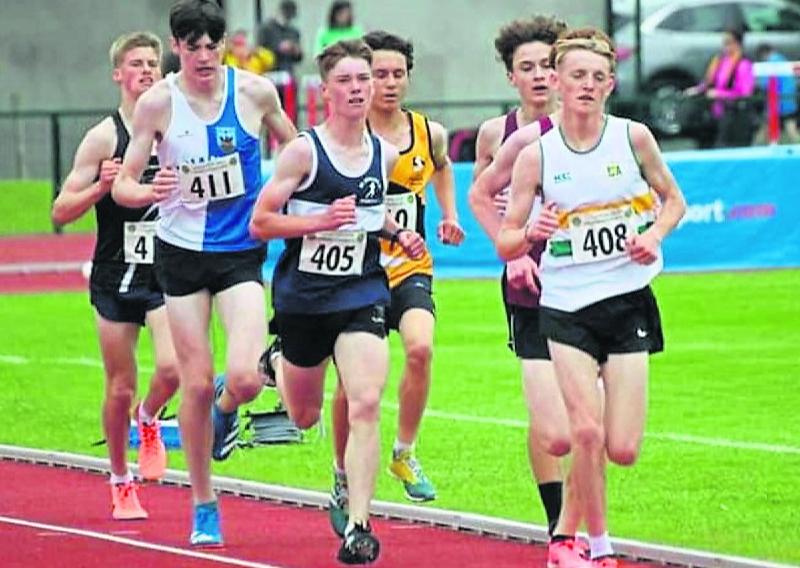 Carlow IT was once again the venue for the first day of the Leinster Track and Field championships. This time the focus was on the under-12 and 13s and the under-16 to 19 3,000m.

With the complete juvenile track and field programme being cancelled last year due to Covid-19, it has been two years since juveniles have competed at provincial level on the track - for the under-12s and under-13s it was their first time.

Competition is a real driver for the county’s young athletes who have been starved of athletics for far too long. The effect of lockdown prohibiting clubs to train together was most definitely reflected in the lower than average numbers in the field events, where their very technical nature requires these young athletes to have more coaching expertise - something clubs could not offer during lockdown.

Clubs have been very good to their youngsters with most volunteer coaches doing their best to facilitate coaching in all events, in the short time that they have been back training. And no doubt catch up will happen in the coming year. The good thing is the sport of athletics is still alive and all are loving its return.

The first medal of the day went to Joe Doyle (St Senan’s AC) who won gold in the under-12 shot-put. Joe was competing in his very first competitive shot-put event, as this event was not included in the counties.

That win was followed by a gold in the under-13 high jump by Thomas Carroll (Gowran). Carroll cleared 1.33m, winning on countback from Sean Sullivan (Ratoath) who jumped a similar height.

The versatile Rachel Duff (Gowran) got a great start to reach the line in first position in the girls’ under-12 60m sprint. Not far behind her was Ellen Daly who finished in third place.

Daly then went on to finish third in the 600m, a race that saw a blistering pace being set by Dunleer athlete Cliodhna Reilly who went out at what one would consider a 200m pace. Daly chased all the way and produced a flying last 100m to clinch the bronze.

Similarly, in the boys’ under-12 600m, Robert Coogan followed the blistering pace set by Fionn Kirby of Kildare. Robert finished fourth, a tantalising half second off the third spot.

In total there were three gold, seven silver medals and five bronze medals won across the county. There were some other firsts too - Barrow Harriers athlete Hugo Tierney was the Graignamanagh club’s first ever representative in a Leinster outdoor track and field, where he ran in the under-12 600m.

It was great to see medals won across all disciplines by the Kilkenny clubs. Medals were won in sprints, middle distance, high jump, long jump, shot and javelin. The middle distance races at under-12 and under-13 can be extraordinarily competitive, so it is encouraging to see youngsters take up some of the field events and experience all events.

Owing to Covid-19 there are some new qualifying rules in operation this year. Normally the first four in each event go to the All-Irelands. While under-17 to 19 can also enter directly into the Nationals (as long as they have a Leinster entry in one event). The latter rule allows older athletes a better opportunity to prepare and also makes for an exciting nationals.

This year, however, there is no direct entry and only three go to Nationals. Leinster, having the highest population, the largest number of counties and perhaps in many respects the toughest to qualify from, is to a certain extent disadvantaged by these rules.

Kilkenny City Harriers (KCH) athlete Ruairi McEvoy ran a great race to take third place in the under-16 event in a time of 10.31 - his first individual Leinster medal.

The winner was Conor Sherwin of Mullingar in a time of 10.25.

Interestingly, the under-17 boys’ race was perhaps one of the most exciting race of the day, when seven out of the top nine athletes in Ireland were contesting just three places for an All-Ireland spot.

In doing so the first six athletes broke the old Leinster record set by Jack O’Leary in 2013. Not only was the Leinster record broken, but the national record of 8.59 also went under the hammer when the first five athletes smashed this too.

Just four seconds separated the first four athletes. David Williams (St Senan’s) ran 8.55 and found himself in the extremely unique position of having smashed the national record by four seconds and the Leinster record by 18 seconds and yet, by finishing fourth, missed out on the All-Irelands - such is the depth of middle distance talent in Leinster.

Next weekend sees a further two days of the Leinster juvenile track and field, where Kilkenny’s under-14 to under-19 athletes will compete over a number of events.

Kilkenny is one of the few counties that have held championships for the younger age groups. This was made possible with slight adjustments to scheduling and a reduction of the normal events on offer.

With impeccable organisation from Kilkenny Co Board all clubs were represented in Scanlon Park, where there were very exciting competitions for athletes in the under-9 and under-10 grades.

Most clubs have experienced an influx of new members this year, with waiting lists for some clubs. For these new members a competition like the county championships are the perfect opportunity to compete at events, they have practised at training.

With just three events to choose from - sprint, middle distance and turbo javelin - athletes were limited to two event and delivered some fine performances.

Bronagh Kearns (St Senan’s) has been in amazing form this year. Race after race she has produced personal bests, ranging from 800m right up to 3,000m.

Kearns was in action again in Belfast, racing against tough opposition. Competing in the 1,500m she secured fourth place in 4.20, knocking four seconds off a PB she set only a few weeks ago at the AAI games in Santry.

With a sub 4.20 now up for grabs, she will be in action again in the coming weeks.