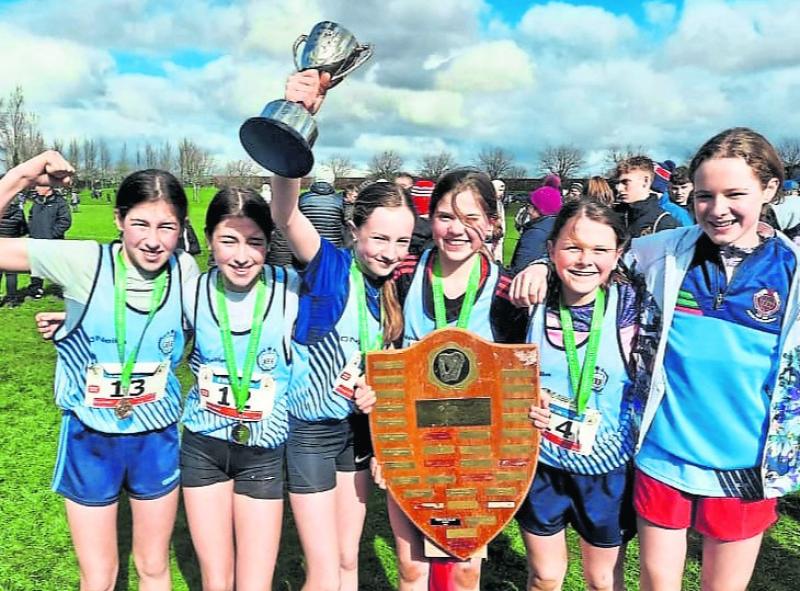 The Presentation Secondary had a runaway success when their minor girls team landed the All-Ireland Schools cross-country championship title in Belfast at the weekend.

Athletes across Kilkenny were engaged in plenty of challenging and exciting competition north and south of the border in a weekend of engaging and competitive athletics action.

Belfast was the venue for the Irish schools cross-country championships, while Athlone hosted the Leinster juvenile relays on Saturday and the All-Ireland junior and under-23 indoor championships last Sunday.

It is a long way to Belfast but it was worth every kilometre for the local athletes who made the journey to the All-Ireland schools cross-country at the City of Belfast playing fields in Mallusk.

Home to many a cross-country international, Mallusk has seen many famed past athletes such as John Treacy, Bill Lacey and Nat Muir tread across the muck and battle the wind. It has, for decades, witnessed many Kilkenny athletes accomplish magnificent cross-county feats and bring home silverware of the highest order.

That winning record continued on Saturday when the Presentation Secondary School, Kilkenny climbed the winners’ podium as the All-Ireland minor schools cross-country champions.

In a field of 80 girls, most of whom are in their first year of secondary school, the Kilkenny team were led home by Clodagh O’Callaghan in seventh place. The O’Shea twins, Katie and Amy, followed next in 21st and 33rd places respectively. Ada Bambrick, Anna Morrissey and Ellen Treacy completed the full team line up.

The Pres won comfortably from Scoil Mhuire Ennis and Our Lady of St Patrick Knock. The overall winner was Emer McKee who in 2021 set a global lead as the fastest 12-year-old over 5km.

St Kieran’s College were represented in the minor boys’ event. They finished sixth overall, with Dan Carroll running a stormer to clinch ninth place overall. In real blow the team lost four members to Covid, hampering their efforts to bring home a medal.
The Presentation were also in action in the junior girls, this time finishing in seventh place. The sole Loreto competitor in this race was Hazel Coogan, who finished in 40th position. 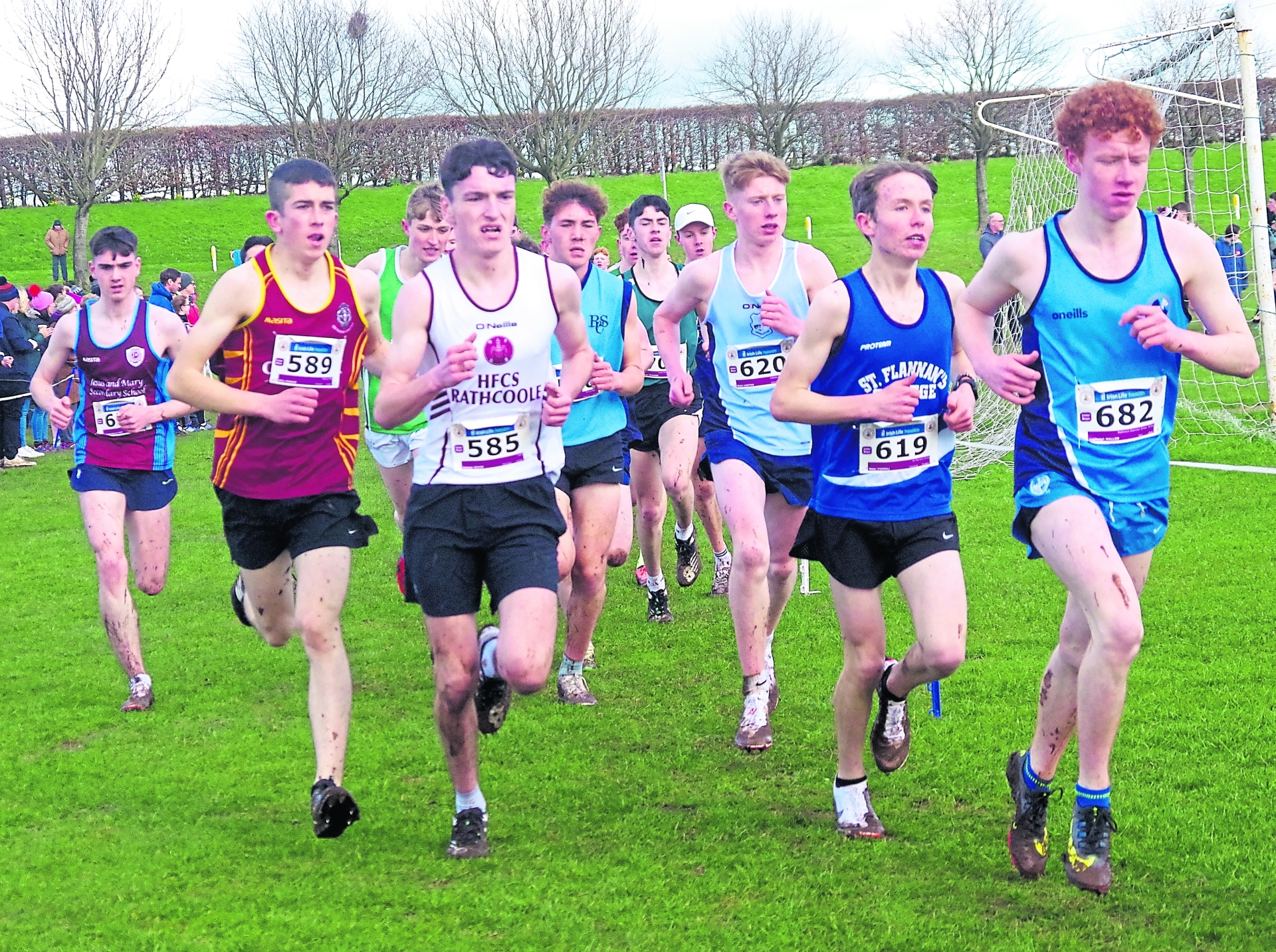 Billy Coogan was the sole representative for the CBS Kilkenny on the day. Competing in the intermediate boys’ event Billy ran a great race to finish in ninth place. In doing so he made the team for the SIAB international in Swansea in a fortnight’s time, adding another green vest to the one he got in the summer.

This race was one of the most exciting races of the afternoon, the action cranking up as long-time leader Lughaigh Mallon (Belfast) was caught by Sean Lawton (Bantry).

The race looked like it was going to be between these two athletes over the final kilometre but, with 500m to go, Peter Farrell (Ennis) came out of nowhere to challenge the two leaders.

Running up the home straight it was a three-way battle between these boys, with Farrell marginally ahead at one stage. A late surge from Mallon saw him take the title with just a hair’s breadth between him and Lawton and Farrell.

Down High School was the favourite to take the team title with Kirsti Foster and Rebecca Rossiter being the pre-race favourites for the individual titles. Belfast’s Rosie Roberts had been close to Rossiter in the Ulster Championships and was also in the leading group. 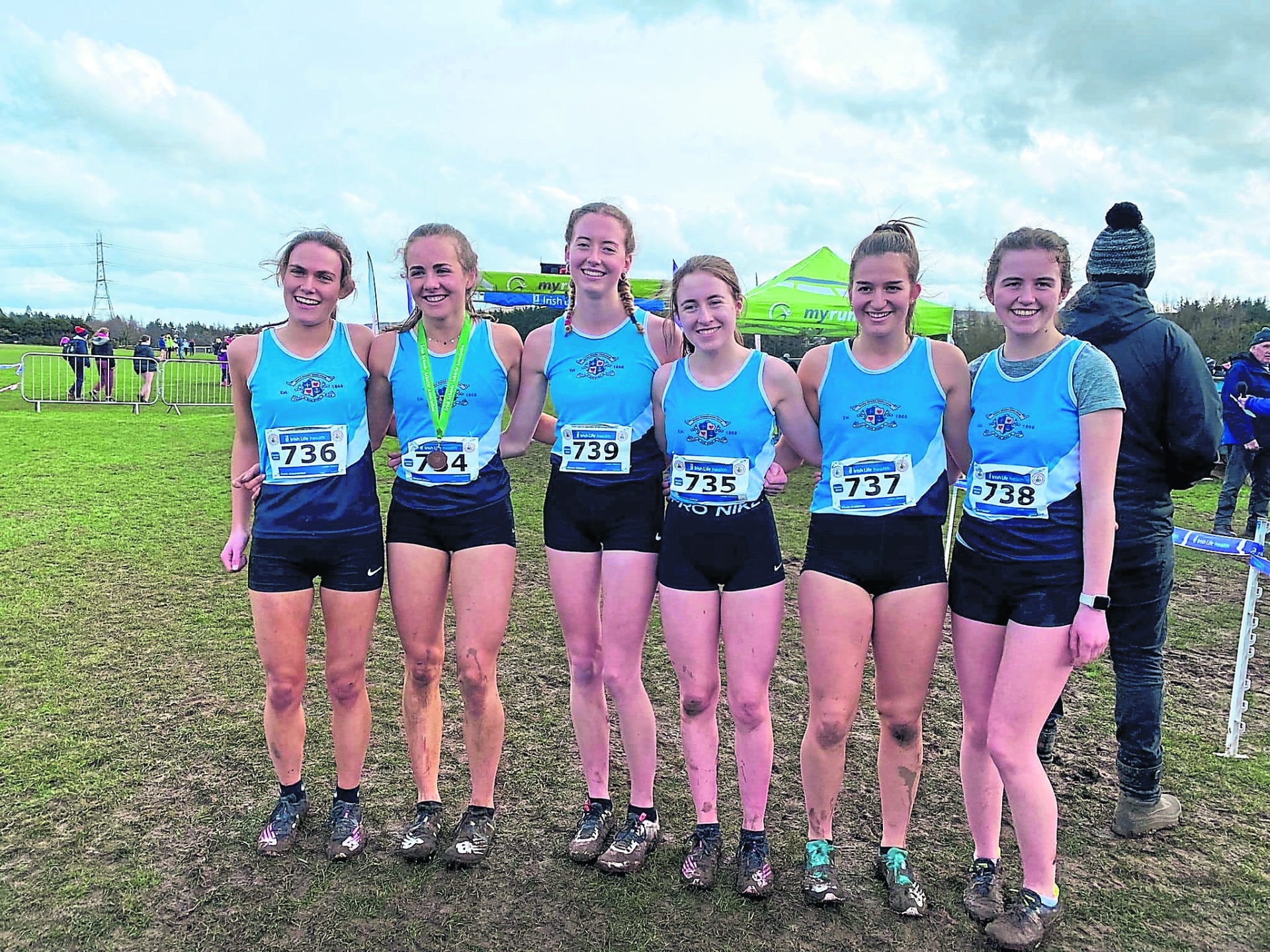 Hannah Kehoe (Loreto, Kilkenny) had memories of her junior cross-country victory etched in her mind as she hung in that leading group.

At the end of the first lap there were eight girls in the leading pack. Midway through the second, and final, lap this group started to tear apart as Rossiter and Roberts decided it was time to see which of them was going to clinch victory. For a moment Hannah Kehoe mounted a challenge of her own, only to be caught by Kirsti Foster.

It was Rebecca Rossiter of Down High School who won the race, leading her school to the team victory. Back in sixth place Hannah Kehoe led the Loreto Kilkenny girls to a third place finish. The team of Hannah Kehoe, Maebh Richardson, Isabella Burke, Alexia Albertin, Eleanor Godden and Pia O’Grady were only beaten by two points for second place.

The senior boys’ race was a very close affair, with four boys locked together for much of the 6,500m distance. The quartet consisted of two members of Ireland’s silver medal-winning European junior cross-country team, Scott Fagan and Dean Casey, along with Niall Murphy and Belfast’s Matthew Lavery.

While some athletes had blissful Belfast sunshine, others had to contend with heavy rain in Athlone. However, it came with the sanctuary of the indoor track as they contested for podium places in the Leinster indoor relays.

A short time later, another gold was heading the Harriers’ way as Kate Maher, Martha Bergin, Emma Hogan and Ellen Daly and subs Kara Canavan and Emily Long won the girls’ under-14 4x200m relay. Ratoath were once again beaten into second place, with Clane third.

The St Senan’s girls’ under-18 team got the club’s only relay medal on the day with the team of Niamh Cuddihy, Juliet Evans, Libby Murphy and Luiseach Donohue taking silver.

In the high jump Alex Cullen (KCH) jumped 1.70 to win the under-17 event, with Rose Sheridan (St Senan’s) getting the silver in the girls’ under-19 high jump. There was silver too for Mateusz Balcer (KCH) in the boys’ under-19 event. This competition was won by Evan O’Toole (St Joseph’s).

With so many indoor events happening this year, it has been hard for athletes to participate in all events. The national junior and under-23 indoors were held in Athlone last Sunday. For some this marks the final event of the indoor season -for others, one or two events remain.

Nine Kilkenny athletes were in action throughout the day: three from St Senan’s, two from St Joseph’s, two from Brow Rangers and two from KCH. The Thomastown girls under-23 quartet participated in the 4x200m relay.

The Brow Rangers team in Coon came prepared for yet another championship, with Emma Kelly and Charlotte Hutchinson competing in the under-23 and junior women’s events respectively. Kelly finished second in the under-23 shot-put, while Hutchinson was third in the junior weight for distance.

Sophie Jackman (St Senan’s) led the women’s under-23 800m for the first 600m before finally finishing in third place. A late night flight killed any chances for a fast time for Jackman, who recently recorded 2.13 for the 800m. She fought a good battle with Carrick-on-Shannon AC athlete Eilish Conway.

At 16, Keelin Duggan (St Senan’s) competed in her first junior race and her first 3km walking race. Moving to this distance is tough but Duggan managed to do well and finished in seventh place.