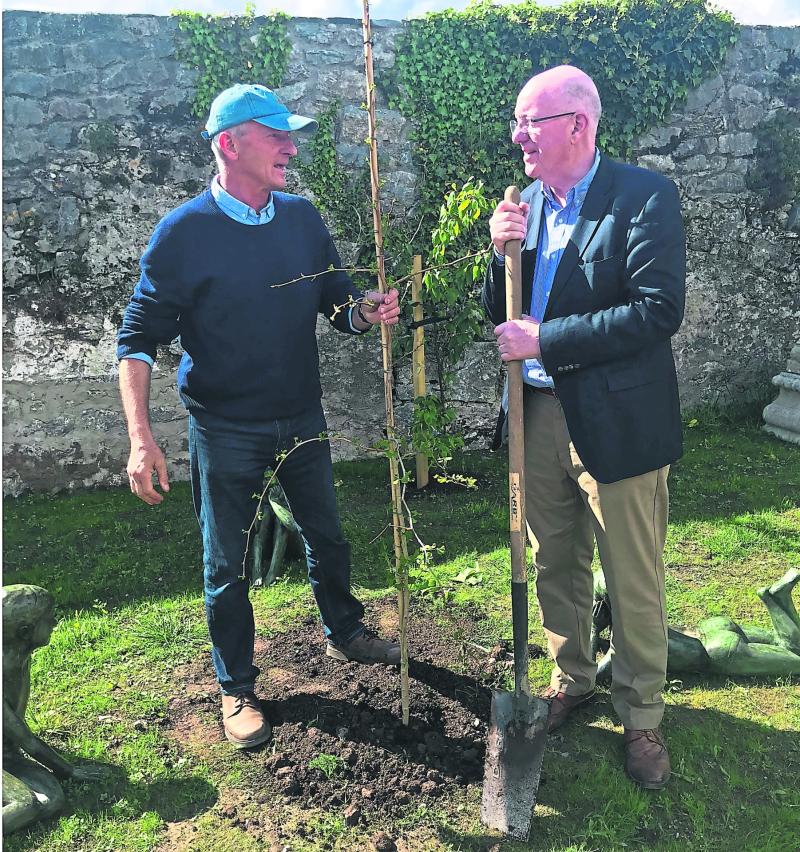 Landscape designer Arthur Shakleton and Minister Charles Flanagan, T. D., who planted a Bilbao tree to mark the opening of the gardens

A newly created garden in Durrow recently had a visit from Minister for Foreign Affairs, Charlie Flanagan.
He, was guest of honour at the opening of the newly created gardens where he planted a ginkgo biloba.
Glentelwe extends along the north side of the river Erkina from the obelisk field - visible opposite Castle Durrow - through a series of hillocks that encompass the local GAA grounds and terminates at the confluence of the rivers Erkina and Nore, located a few hundred metres east of the gardens.
Mills were a common feature of the manor economy of medieval Ireland. By the mid-18th century water powered machinery housed in substantial buildings were at the heart of a large-scale industrial and commercial enterprise.
The six stories high mill at Glantelwe was ten bays wide while its two water wheels powered five sets of mill stones making it the fourth largest mill in the county.
Decades of ruinious decline were halted with the restoration of the miller’s house and the grain store. Landscape designer Arthur Shakleton was commissioned to create a new gardens centred on the ruinous mill whilst hugging the banks of the river Erkina. His impressive portfolio includes Fruitfield, Grange, and Capard House in county Laois, and Butler House and Lacken Mill in Kilkenny City.