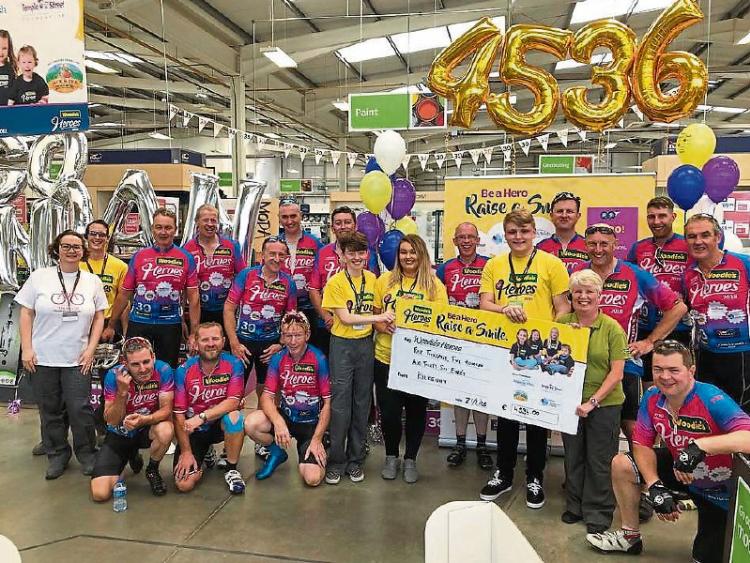 The staff and customers of one Kilkenny store have pulled out all the stops to raise more than €4,000 for four of Ireland's deserving charities.

The fourth annual Woodie’s Heroes campaign took place this summer and the staff of Woodies in Kilkenny put in a lot of hard work and organised fun activities in order to raise money for the deserving charities.

Last week manager of the Kilkenny Woodie's store, Suzanne Bryan, was able to present a cheques for €4,536 to The Jack and Jill Foundation, Down Syndrome Ireland, Temple Street Foundation and Make-A-Wish Ireland.

Suzanne presented the funds raised to the 'Woodies Heroes' - a group of cyclist who took on a 1,600km cycle around the country, collecting cheques from Woodies stores across the country along the way.

In conjunction with the funds raised in store and from the cycle, this year’s Grammy Award winning band Foo Fighters granted their permission to record ‘My Hero’ as part of this year’s activities. Irish band Wild Youth have joined forces with the Woodie’s choir to record the track.

From last year’s fundraising, Woodie’s Heroes funded 18 wishes for children and their families to go to Disneyland Paris with Make-A-Wish Ireland.

Last year’s fundraising allowed the Jack & Jill Foundation to increase the age restriction from 4 to 5.

In 2016 Woodie’s Heroes contributed to the opening of a new neurology and renal unit in Temple Street.

“The Woodie’s Heroes campaign has been an outstanding success and we are very excited at the prospect of raising one million euro since we started three years ago,” said Woodie’s CEO Declan Ronayne.