Day in the Life of Marian Flannery 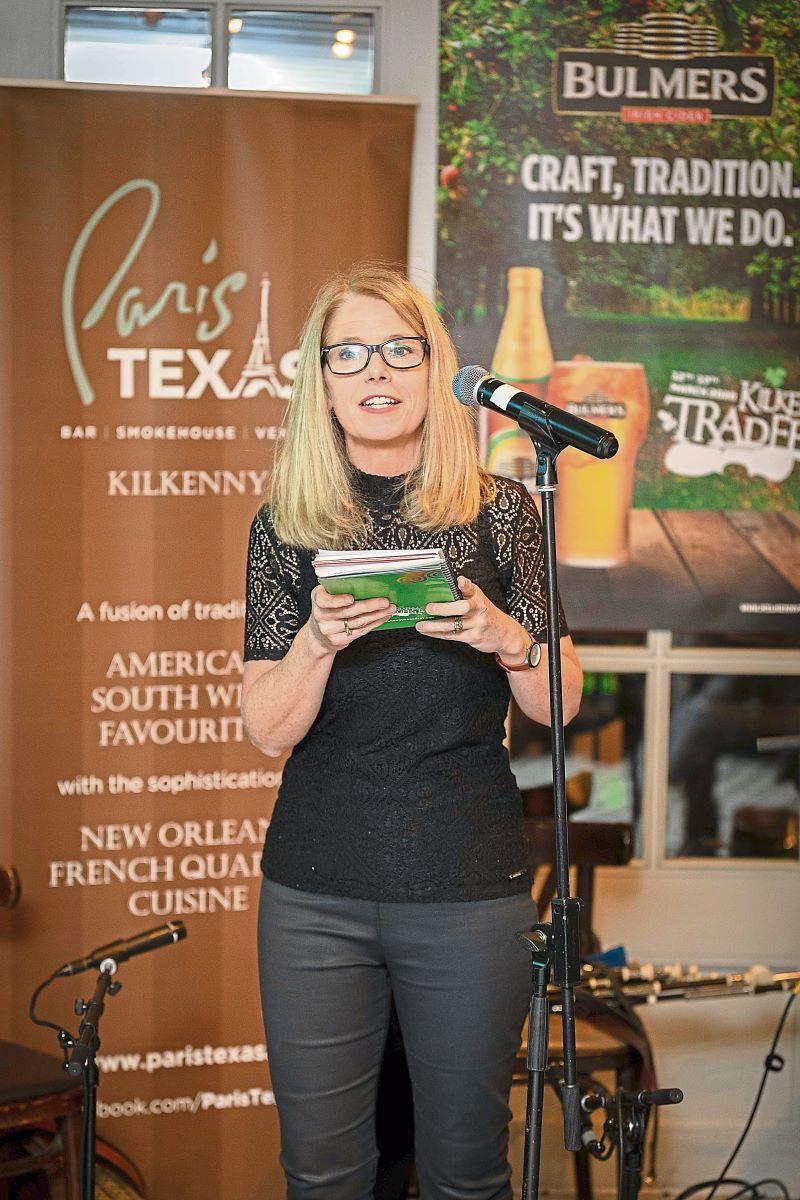 Marian Flannery (Director of Tradfest) speaking at the launch of Kilkenny Tradfest 2020. Photo by Dylan Vaughan

Marian Flannery is the youngest of eight children of the late Kevin and Mingha Flannery of John Street, Kilkenny.

Marian is Director of Kilkenny Tradfest and Savour Kilkenny Food Festival. She began working as a micro-biological lab technician before becoming involved in a food company start-up as Director of Sales Marketing & Distribution with Dublin Company Blenders Ltd.

She married Seán Ó hArgáin in 1990 and the couple moved to South Kerry in 1991, where their couple’s two children Fionn and Caoilfhionn were born.

Marian was the South Kerry LEADER company Chief Executive for 10 years and was also Secretary of Comhar LEADER na hÉireann. She established her own project management company in 1999 and studied for a Master’s Degree in Business Leadership.

Marian and Seán returned to Kilkenny in 2002. She continues to works as a Project & Events Manager for a wide variety of clients from voluntary organisations to statutory agencies and private companies.

Here is a glimpse into Marian’s world…

Morning: If I get up early enough, I try to take our two re-homed dogs Charlie, a hyper English Springer and Elsa, a slightly mad Dalmatian down along John’s Quay, down the canal past the castle and as far as the new pedestrian bridge and back home. We are so lucky to have this walkway along the Nore.

Lunchtime: If I’m not out and about at meetings, or meeting with friends, I have lunch in the canteen in Burrell’s Hall, the Enterprise hub run by WIT on the grounds of St. Kieran’s College. Having been self-employed for twenty years, it’s great to have such a diverse group of people and businesses around me and the chat is great and informative.

Evening: In the evenings I normally catch up with family, our adult children Fionn & Caoilfhionn and my brother Lar who lives up the road and helps out with the dog-walking duties, in exchange for a good dinner! I’ve recently gotten back into running and try to do a 5k on every second or third day, normally down the ‘Meadows’ on the riverbank opposite our house. I started running by participating in Adele’s Gazelles ‘couch to 5k’ in Danesfort and am really enjoying the adrenaline kick. Adele is a very inspiring runner who has a fantastic way of getting you to run without realising it!  Quite often, one of us has a meeting in the evening but if we have time, I enjoy going to the cinema or out for a bite to eat.

You must have great memories growing up in the famous Carmel Hotel on John’s Street?

My outstanding memory of the Carmel Hotel is the force of nature that was my wonderful late mother, Mingha Flannery. She was a unique woman for her time and total powerhouse, who agreed to marry my father provided that he had a dowry of a hotel!!

Starting her hotel career in Dublin, she was one of the first female hotel managers in the 1940’s. In ‘the Carmel’, She was maître-d, a cordon bleu-trained chef, book-keeper, receptionist, marketer and amazing mother of eight children, all at the same time.

Being the youngest, I spent a lot of time in her company and adored her resilience, loving nature and most of all her sense of fun. Her hospitality in the industry was exemplified in insurance worker and former international rugby and cricket star Jack Notley who came to stay for a week, but left over thirty-five years later when the hotel was sold!

The hotel was a favourite ‘stop over’ for the male dominated world of sales representatives, I recall one of her regulars was Bob Geldof’s Dad. As a kid I thought that our hotel was specifically for men! Wedding breakfasts and ordinations were the part of the stock and trade of the hotel as well as Rugby gatherings and post-hunt parties.

Most families on John’s Street lived over the shop but you lived under the hotel!

One of the disadvantages of living in the basement were the almost annual floods! In the days before flood relief scheme there was much drama as we had to move the family and the kitchens and our wheelchair bound grandfather upstairs before the river broke its banks and rapidly came into the hotel.

It was a nightmare for my parents but, while we couldn’t admit it, we loved the drama of it all, not to mention getting to row down John Street in a boat!

You have often said that John’s Street was full of influential business people in particular women.

John Street was alive with businesses and families and was such a great place to grow up. I remember watching Kilkenny College rugby matches over our back wall in our half acre garden!

Between John’s Bridge & the top of John Street, at that time, we had five hotels, pubs, hardware shops, vegetable shops, butchers, bakers, a veterinary practice, wine merchants, doctors, pharmacies, petrol station, garages, lots of sweet shops and a TV rentals company! Yes! I remember when people use to rent TVs!

My second home was that of the O’Keeffe family, who treated me like one of their own.  Callan native, Eamon O Keeffe was a most inspiring businessman who, along with his wife Maureen, 50 years ago, established several successful businesses on the street; all still thriving today; the Wine Centre, Meuble’s Furniture, a wholesale confectionery business and later Petmania & Sullivan’s Tap Room.

Maureen ran a beauty care and a hairdressing business and is still hale and hearty while the late Eamonn was one of the city’s leading lights being heavily involved in Kilkenny Chamber of Commerce and I ironically, remember him organising the St. Patricks Day Parade in the 70’s! He entered a float for Meubles which featured all of his children, and myself, sleeping in a 4-poster bed on the back of a lorry!!! Thankfully we had taken some wigs from Maureen’s salon to disguise our identities.

Later, one of the most influential people was & is Eamon Langton who has transformed much of the street, and along with his family continues to develop his businesses.

My late brother Gregg, who passed away all too soon in 2003 continued my mother’s innovation and the Carmel became one of the leading music venues in Ireland, still celebrated by people like Honor Heffernan, Mary Coughlan, Jimmy McCarthy and many others who played there. Some of them now return to venues like Cleere’s and thankfully lately to Billy Byrne’s at the top of John Street and I am delighted to be involved in running Tradfest, which will this year feature Andy Irvine, Donal Lunny and others from the Carmel days as well as local legends Reel to Reel, who among other things were one of the bands to play at our wedding thirty years ago this year.

This is your 8th year as Director of Kilkenny Tradfest. How do you keep coming up with new ideas to attract the crowds?

Musicians were also always treated well in the Carmel and we try to do the same. Many of the musicians hear about the welcome and the craic around the Festival and are easy to persuade to come along.

We have a great committee who all have a passionate interest in music and come up with brilliant suggestions. If only we had enough money to bring all the superstars we would like to!! We have been lucky enough to have neighbouring company, Bulmers who are our main sponsors supporting the festival and in particular our Trad Trail. This has developed into something special thanks to the insights of Martin Coughlan, musician and committee member, pulls all his musician friends together for sessions throughout the city.

You also organise the St. Patrick’s Day Parade. That must be challenging?

The main driver for me in terms of the St. Patrick’s Day Parade is that local people and community groups get stuck in and get involved. The days when people stood on the street watching commercial vehicles trundling along has been replaced by thousands of local people taking to the streets themselves. We hope it is creative, colourful and full of life, just like our city and county. We also try to highlight local events, like this year’s Irish Golf Open, coming up in Mount Juliet in June, along with the hugely important theme of ‘Biodiversity-every creature counts.’ Of course, our stewards, the Garda Siochána and the Red Cross crew make all the people management on the day a lot easier. This year we are having a post parade party on John’s Street.

What are the highlights to this year’s Tradfest?

From my own childhood, it will be brilliant to hear Horslips rocking the city again at their gig in Langton’s.

Paul Brady and Andy Irvine will showcase their legendary 1970’s album in the Hub in Cillin Hill. Kila play a free gig in Paris Texas on St. Patrick’s evening.

Once again, Iarla Ó Lionáird and Steve Cooney, supported by the exciting and upcoming GaeltachtKK will be in the Set Theatre on St. Patrick’s evening also.

I’m really looking forward to getting back in to see Evans Home, just off John Street where I volunteered to visit elderly people in my younger years. Kilkenny County Council is holding an Open Day during the festival and guests will be treated to some beautiful traditional music in this very special space.

For Tradfest Kilkenny tickets to any event, please visit www.kilkennytradfest.com