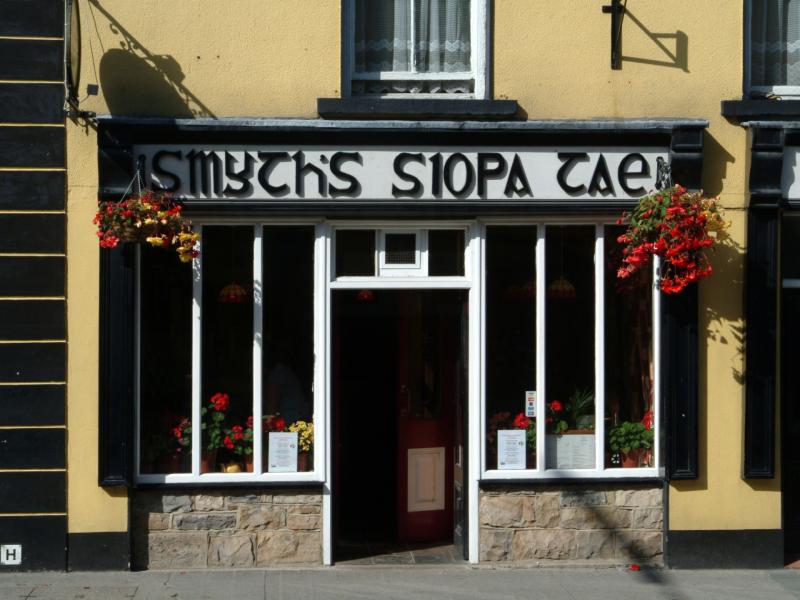 Irish language signs were once a common sight on shopfronts in towns and villages across Kilkenny, but they are an increasingly rare sight, with many a reminder of a shop long since closed.

Some emerge during renovation and other works to existing shops – a reminder of a past life for a building. A new fund seeks to bring these old, often faded signs back to their former glories.

Following his recent announcement of €3 million for 85 built heritage projects across the country under this year’s Historic Structure Fund (HSF), Minister of State for Heritage and Electoral Reform, Malcolm Noonan has invited new applications to the scheme under the Irish-language shopfront stream.

This stream, announced last year by Minister of State Noonan alongside Minister for Tourism, Culture, Arts, Gaeltacht, Sport and Media, Catherine Martin, and the Government Chief Whip and Minister of State for Sport and An Ghaeltacht Jack Chambers boasts joint funding of €100,000 to support the conservation of traditional Irish-language shopfronts.

Individual grants of between €15,000 and €50,000 will be made for eligible projects which include refurbishment and conservation works to historic shop facades, windows and signage. To qualify, structures must be included, or eligible for inclusion, in the Record of Protected Structures of the relevant local authority.

“The conservation of historic shopfronts is a cause close to my heart and, of the 85 awards I announced recently under this year’s HSF, I was delighted that seven of these were to shopfronts in the English language," said Minister of State Noonan.

"Today’s reopening of applications to Irish language shopfronts will, I hope, encourage projects which preserve both our built and linguistic heritage in Gaeltacht regions and beyond.”

Minister Martin said: “This scheme is an excellent way of increasing the visibility of the Irish language and I am delighted that owners of historic Irish shopfronts will have another opportunity to apply for funding under this year’s HSF. My department is looking forward to working with the Department of Housing, Local Government and Heritage on this exciting and innovative scheme.”

Minister of State for Sport and An Ghaeltacht, Jack Chambers, TD, added: “My department and our state agencies offer wide-ranging supports to the business community in respect of the Irish language and this initiative to preserve Irish-language shopfronts is a wonderful addition to these. I would encourage any eligible shop owners, or owners of premises that were once shops, to apply and look forward to seeing the results of the projects funded under this stream.”

Owners of eligible structures should apply through their local authority.

Further details may be found at www.housing.gov.ie and from local authority Architectural Conservation Officers and Heritage Officers.