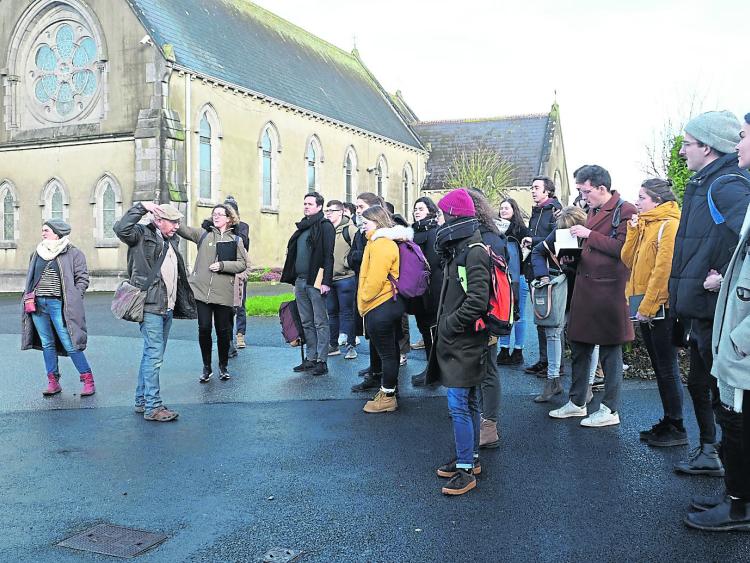 The famous Big Chapel novel by Callan native Tom Kilroy created huge discussion in Callan back in 1971 when it was published. Globally the book was widely acclaimed but it was in Callan where it generated most discussion.

Many in the town at the time were able to identify with many of the individuals depicted in the book even though the surnames and place names in the book were fictional.

Based on a notorious clerical scandal in Victorian Ireland, The Big Chapel deals with the indelible essence of humanity and the dangers of adhering to ideological dogma.

The ‘Big Chapel Project’ of 2019 takes it name from the famous book but will take on a totally different image. The project is an inclusive, participative community engagement project based on the novel The Big Chapel by Thomas Kilroy.

There are four pillars to the project: a celebration of literature; music; architecture and performance.
The literature pillar involves a One County, One Book initiative, inviting the people of County Kilkenny to celebrate and read The Big Chapel and participate in discussion groups, podcasts and workshops to generate a countywide conversation and debate, making the book accessible to all.

Last Friday a group of UCD architectural students visited Callan and were taken on a tour of the town to see and discuss the uniqueness of some of the old beautiful buildings.
They were taken on the tour by Donal Gleeson and Olivia Treacy who head up the ‘Big Chapel Project’.

Later in the evening a large crowd gathered at Fennelly's on Bridge Street to discuss planning for the future of Callan.
Among the subjects discussed were the empty business premises around the town. The lively discussions were based around whether the vacant business premises should be converted to apartments or houses where as others argued in a good debating way that perhaps at least some of the vacant premises should be recreated into proper retail outlets especially in Bridge Street but it was noted that if those projects were to be brought to life that the owners would need support from local government in the shape of financing.

The one subject that all agreed was that if Bridge Street was to be revitalised that parking should be banned and the street should be made one way.
As a number of contributor pointed out that making the street one way was suggested nearly 15 years ago and it had received the general support from most as well the County Council but a small number of shopkeepers vociferously campaigned against the one way system saying it would prevent traffic from stopping outside their business premises.

The UCD students and their professors were also highly impressed with the high membership of both the John Lockes Club and Callan United and showed amazement that both clubs were situated in the same area. It was pointed out that there was a huge crossover of children that play both games and excellent cooperation between both clubs. This exercise was just one of the early stages of the Big Chapel Project with lots more to come during the year with emphasis on the youth of the town been involved.

Malcolm Noonan was the only local politician in attendance and he will no longer represent the Callan area after the local elections in May.
There will be councillors as well as potential new councillors knocking on doors in the next few months looking for votes.