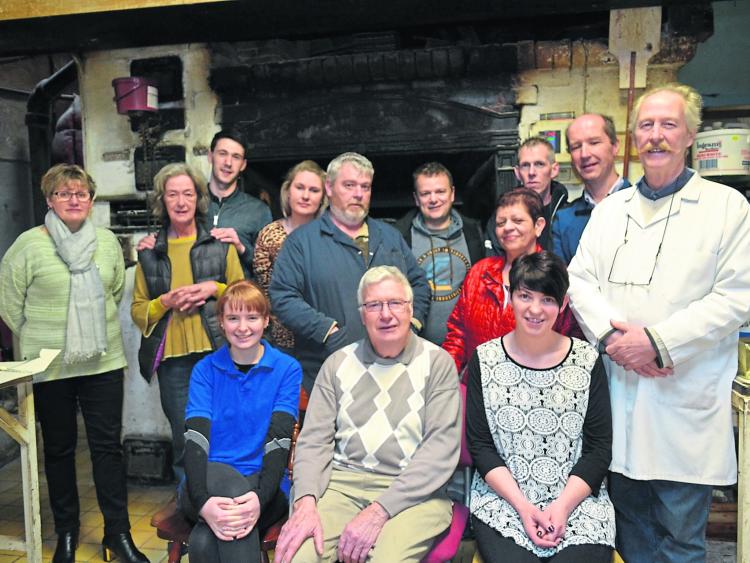 John Maher pictured with all his work colleagues at Keogh’s Bakery on his last day.

The word legend is loosely used to describe a team, a sportsperson or even a world leader or politician and that is fine if he or she deserves that type of hero worshipping.

On Saturday at historic Keogh’s Bakery on Bridge Street the legendary John Maher parked his bread van in the yard for the last time.

Legend, is the word that Tom Phelan who took over from John on Monday morning called him.  He said that he spent a full week training with John on the van as he did his rounds and as Tom said “I have a hard act to follow”.

At his own admission, John spent 43 happy years as a bread sales man for Keogh’s Bakery and in those years he saw many changes. It was so appropriate that the final presentations took place in the bakery house with all John’s colleagues gathered.

Billy Keogh spoke about John when he came to the company and how John’s job had changed over those forty plus years.
Billy said when John started the bakery business was so different as in most counties there would be at least four to six bakeries in each county, where as today there are only one or two.

John’s job back in the 1970’s would have entailed calling door to door delivering the regular daily pan to households. There was a network of small country shops to be serviced also at that time. John said he had a daily visit to four shops in Windgap, Walsh’s, Doran, Ryans, and Guinan’s.
Sadly today there are no shops in Windgap and that is the pattern of life today throughout John’s bread run in South Kilkenny and Eastern Tipperary.

But as Billy said: “As the things changed the bakery had to evolve and John Maher always bought into those changes.
“Today there are not as many personal door to door calls, the vast majority of the country shops have closed, but with that came the supermarkets, more restaurants, delicatessens and it is those outlets that Keogh’s Bakery turned their concentrations to.

Billy said that John was more than a van sales man, he said he was also a ‘Good Samaritan’ to many on his regular run. Nothing was a problem for the quiet man on his daily route.
He regularly brought shopping to people in the countryside, he collected pensions, brought medicines and often dropped in on the elderly and those living alone to make sure they were ok. As we all know Lower Bridge Street was always prone to flooding for years with many houses suffering from serious water damage.

Keoghs Bakery was also in the line of fire from the Kings River, but John also had the eagle eye for a pending flood.
As Billy Keogh said John would often spot possible dangers up river from Callan while on his travels.
He might spot a field that showed signs of serious flooding and that would act as a warning to John and he would swiftly get word to Billy that there was a possible flood on the way.
That helped Billy and his staff to prepare for the worst.

Billy and John recounted the 43 years and Billy acknowledged that John had driven eight different vehicles in that period and never once had an accident.

Before John went to work at Keoghs Bakery at the age of 27 years he worked with the late Jimmy Hartley erecting farm and industrial sheds and when he saw the advert for van salesman at Keoghs Callan he went for it and so began a long and happy working period with Billy and before that with Kevin Keogh senior.

Two of John’s seven children live in Sydney and Melbourne and it is John and his wife Margaret’s intention to visit both of them later this year. Life has been busy for both Margaret and John so now they intend to enjoy life by ding some travel.
Billy Keogh made a special presentation to John while baker John Doyle spoke eloquently about John Maher and how he was so helpful to all staff hat worked at Keoghs and then presented him with a beautiful Citizen Watch on behalf of all the staff at Callan, Carrick-on-Suir and Kilkenny. John will be very much missed but certainly Keoghs have recruited an excellent replacement in Tom Phelan.

Tom is well known throughout South Kilkenny and South Tipperary having ran a successful shoe business in Carrick-on-Suir for many years and no doubt he will continue many of John Mahers traditions.