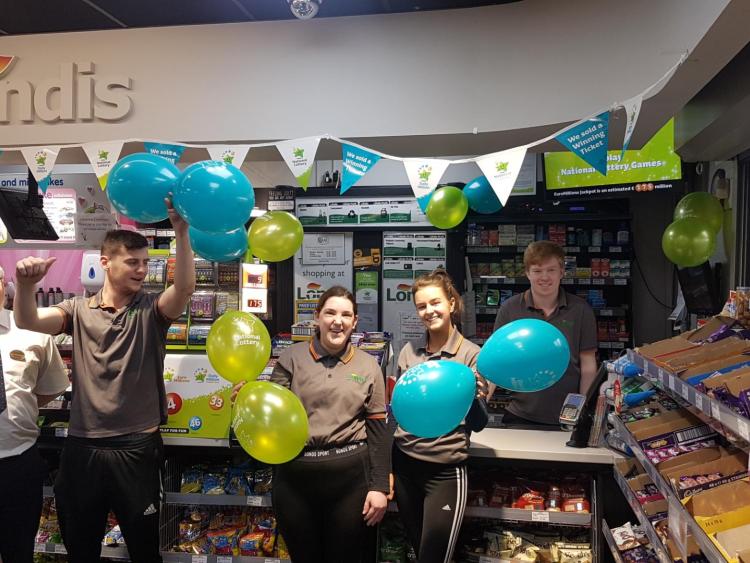 Celebrating at the Londis Coop in Callan the day after the big win!

A Kilkenny man was beaming from ear to ear today in the National Lottery Winners’ Room as he collected his cheque for a cool €1,000,000 which he won on a Daily Million draw last month.

When asked how it feels to become Ireland’s newest millionaire, the cool and collected winner declared: “Ah sure isn’t it a grand feeling!” as he folded the cheque and placed it in his pocket.

The lucky winner struck gold on the 9pm Daily Million draw on Friday, February 15, and he bought his winning Quick Pick ticket at the Londis Callan Co-Op, West Street, Callan in Co. Kilkenny.

The man revealed he has no plans as of yet for his National Lottery windfall and continued: “I checked my ticket just before 10pm that night and found out that I was a millionaire. I couldn’t believe it – in fact I still can’t believe it but I’m going to take my time to see what I want to do with the money. There’ll be no spending spree for the foreseeable future anyway!”

Daily Million draws take place at both 2pm and 9pm, seven days a week, for just €1 per play.

“Hopefully the winning won’t stop there as tomorrow night’s EuroMillions jackpot is an estimated €30 million. For your chance to win this incredible life-changing prize, play EuroMillions in-store, online or using the National Lottery App on your smartphone before 7:30pm tomorrow evening.”