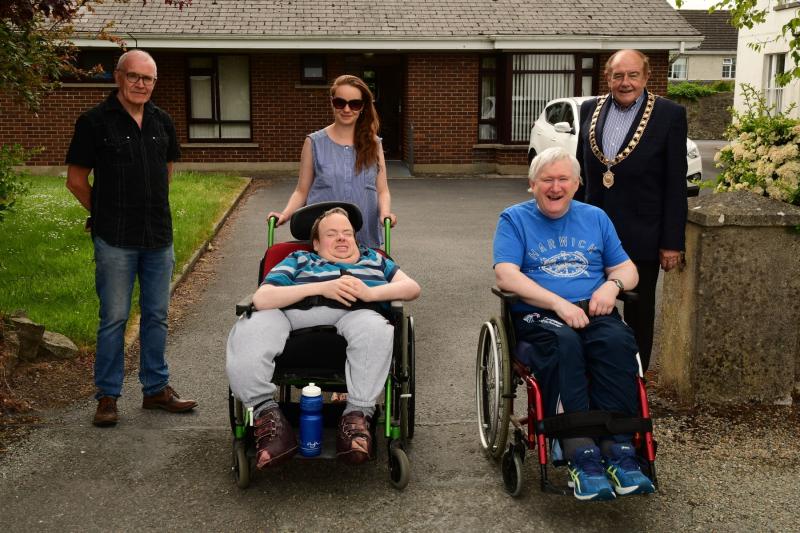 The lack of wheelchair access to some of the major business premises in Callan has been highlighted.
As part of the visit of the Kilkenny city mayor to Callan, last week, some of the daily difficulties faced by wheelchair users in the town were highlighted.

Cllr Martin Brett accompanied local councillor Joe Lyons for a socially distant visit to the Irish Wheelchair Association’s residence at the Parochial House, in Callan.
John Grace and Gerard Heasey spoke about their daily activities and the how the Covid-19 restrictions have impacted their lives.

The support they receive locally is great and they enjoy life in Callan town, but pointed out there is no wheelchair access to the two local banks, and while the post office door is at path level it is too narrow for wheelchairs.
Cllr Lyons said Callan has two communities including differently abled people at L’Arche and Camphill, as well as other wheelchair users in the parish.

Cllr Lyons was delighted to welcome Mayor Brett to the town, in the week before the curtain comes down on his year-long term as mayor.
It was busy and enjoyable year for Cllr Brett, but the last few months were different because of the Covid-19 restrictions.
Last week he took a walkabout in Callan, meeting the IWA community in Chapel Lane. He then visited the site of the Motte Field on the banks of the King’s River, where work had just started on installing a community walking path.

The final leg of the mayor’s visit was Bunscoil McAuley Rice where he was welcomed by popular principal John Maloney. They fondly remembered Brother Damien, who is sadly missed by pupils.
The school was established in 2007 as a result of the amalgamations of Callan’s two primary schools. A new, state of the art, 16-classroomed school was opened in April 2014. The school is currently in the process of appointing contractors to build two new classrooms and three learning support rooms, as well as a new school library. This extension is needed to service the growing local community.

Cllr Lyons thanked Mayor Brett for his time in Callan. He said Cllr Brett was a great ambassador for Kilkenny, and that he carried out his duties as mayor with honour and pride.