5,000km challenge from coast to coast in America 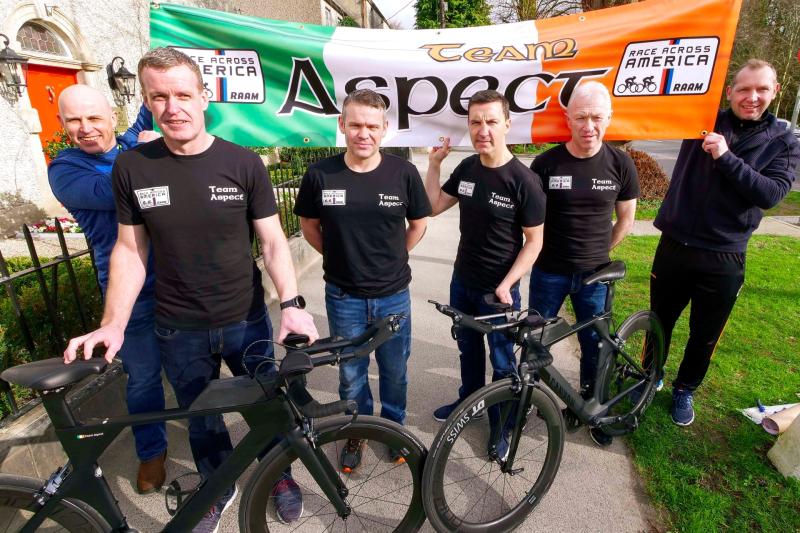 Four cyclists from Kilkenny are about to take on the world’s toughest bicycle race - 5,000 km non stop from the West to the East coast of America!

The Race Across America attracts ultracyclists from all over the world but just one team from Ireland are taking on the four-man challenge this year.

Team Aspect is made up of John Dowd, Seamus Nash, Cathal Phillips and Pat Maher, all from Castlecomer.

The team has two goals - to win the race and to raise as much money as they can for the Aspect Centre at SOS Kilkenny.

It's a big ask but the team are confident. They have already taken on the Race Around Ireland twice - winning it in 2017.
It was that win and the desire to help the Aspect Centre that spurred the team on to do more and they all signed on to take part in the Race Across America.

The race starts in Oceanside, near, San Diego on June 11 and for the next 5,000 km there must be at least one cyclist on the road at all times. The route goes through 12 states, over three mountain ranges, includng the Rockies, across four of America’s longest rivers (Colorado, Mississippi, Missouri and Ohio) two deserts, Monument Valley, and Gettysburg, finishing at Annapolis, Maryland.

Preparation is both physical training but also logistical planning - along with the four cyclists the team has 14 people supporting them who will navigate, look after food and hydration, provide massages, technical support and communications.
Every one of the team is financing their own participation and giving their own time to take part.

Pat Maher thanked their crew: “We have the easy end of it, the hardest part is getting the team together and having the logistics right.”

Trainer Ivan McMahon said the Race Across America (RAAM) is the pinacle of endurance racing. He has planned out their 52 week training programme and is slowly building up the endurance and aerobic fitness of all four cyclists.

Not only does this mean hours on the saddle but testing with a sports scientist, altitude training and even bringing their bikes into the sauna at the Springhill Court hotel to get used to cycling in high heat!

Cathal Phillips predicts sleep deprivation will be the hardest part of the challenge.

Crew chief Ger Campion is tasked with organising Team Aspect's travel and the other aspects of the trip.
The team will check in at 54 points along the route that will be marshalled by RAAM.

It's a huge undertaking but the team has great motivation. Cathal said: “The Aspect Centre is for adults with autism and intellectual disabilities. I have two sons who go there, that is our inspiration, we do it for them. The centre always needs support.”

Seeing the difference they make is very rewarding, Cathal said. “We raised €8,000 for them in 2017 and it's nice to see the badly needed equipment they purchased with that.”

Ivan said: “It's a driving force not only for the cyclists but for the crew aswell. We're doing it for a fantastic charity.”

Team Aspect needs your support and is offering a range of sponsorship options to businesses, including company branding on the cyclists and vehicles, and on their website. The RAAM website covers the race live and has more than 25 million hits during the event. Contact Pat on 0872369808 or pat@teamaspect.ie

You can also donate at www.teamaspect.ie/donate.

Team Aspect will hold a launch night at the Avalon Hotel in Castlecomer on March 1.