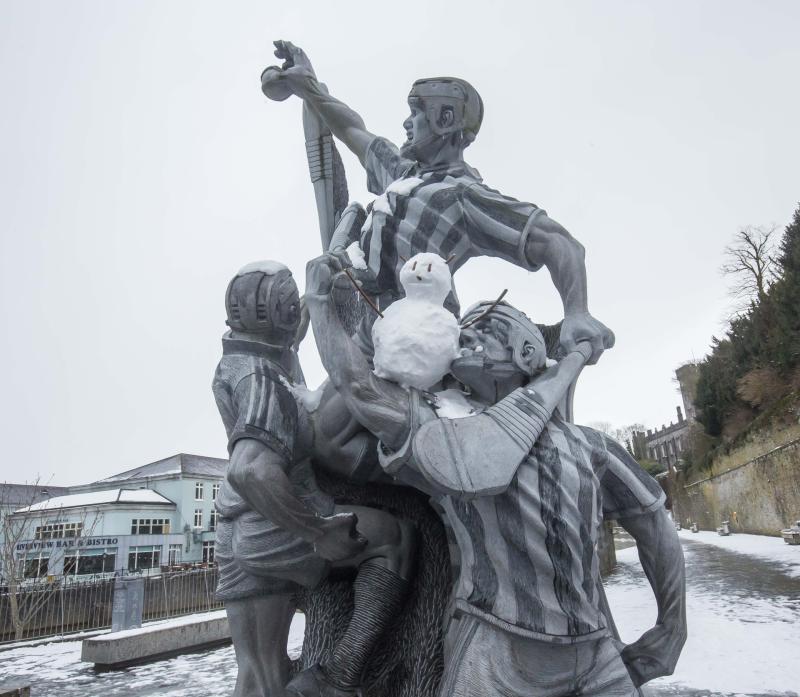 Kilkenny City. Thursday 1st March 5.30 p.m. My wife and I are sitting at the kitchen table. We are nursing two large mugs of coffee and munching Mikados (well I am) We are looking out the window. And we are waiting. Waiting for Emma. Storm Emma. The fire is blazing. The cupboards are full. And a few measly flakes of snow are drifting across the lawn. We are not impressed. We want action. We’ve prepared for action. Braced ourselves for action. After all the talk, all the warnings, all the hype – we feel we deserve action. We stocked up. We stayed indoors. We stayed safe. We did what we were told. We’ve been model, storm-citizens. Now we want our reward. We want snow. We want winds. We want blizzards.

6.45 p.m. Still no show. Not even snow! Even the measly snowflakes have stopped falling. I decide to go outside. ‘I may be sometime’ I joke. I walk around the house, sniff the air like a seasoned Sioux and check that the bird feeders are full. ‘Any sign?’ the wife asks. ‘Nothing’, I report. ‘Is she going to come at all?’. ‘Who knows but I’ll tell you this much – if she doesn’t turn up I’ll be ringing Joe Duffy first thing Monday.’ My wife pulls the blinds, puts the mugs in the sink and wonders what wonderful TV viewing I’ve lined up for the night. ‘Weather reports’, I chuckle. 12.35 a.m. Wined and dined on our supplies of vino and victuals and having gorged on several episodes of ‘Endeavour’ (re the young Inspector Morse) we head for the bed to stock up on sleep, feeling a tad dejected at having been stood up by Storm Emma! Friday 2nd March 8.10 a.m. All is calm. All is bright. All is white. With the emphasis on calm. 9.50 a.m. A gentle shower of snow wafts across the lawn. Later, much later – a pleasant carpet of snow covers the city. But no sign of Emma! Or the Beast!

Saturday 3rd March 3.30 p.m. It had to happen. I couldn’t possibly escape Storm Emma unscathed. Skidded twice and almost crashed into someone head-on! In the aisle of Supervalu! The place was packed, choc-a-bloc – worse than Christmas! A classic case of cabin-fever accompanied by trolley-mayhem. ‘We need traffic lights’ someone joked. I bumped (literally) into people I hadn’t seen in years. ‘Be careful turning that corner’, a former colleague of mine advised. He was right. I damn near collided with a large lady with four children and a full trolley! Could have been serious and me with no trolley tax or insurance! Did fracture an egg, however, but what’s a fractured egg in the scheme of things? Indeed, in the scheme of Storm Emma we in the city got what someone on Facebook described as ‘The Disney version of the Beast from the East.’. Actually ‘Beauty & the Beast’ could well describe the Kilkenny city experience – we savoured Beauty, as in picture-postcard scenes, but were spared the ‘fangs’ of the Beast. Facebook, of course, was rife with comments, here’s a selection: News about snow should be called Flake News * All townies advised to stay indoors; country people, you will need your big coat. * No farm will close due to snow. Every farmer will be out in the cold, freezing his arse off, tending to livestock and hoping equipment isn’t too frozen to work * Buy a pint and receive a slice of Brennan’s bread absolutely free * Don’t make unnecessary sandwiches * Is Brennan’s bread or Pat the Baker sponsoring the storm? * Check in on elderly neighbours – they may have mentioned you in their will! * RTE have announced that it’s safe for redheads to sunbathe! * Since the snow came all the wife does is look through the window. If it gets any worse I may have to let her in! * Public told to stay indoors – there’ll be some rush on baby-grows come December! * Finally, a spokesman for The Wetlands Orchestra (aka Pat Shortis and Jim Cody) stated: ‘We’ve seen more snow on a Christmas card and our world tour will continue as planned’ * Delighted to read that as I hope to catch the ‘boys’ in Liguria on the last leg of that tour. In the meantime, Pat Shortis, may I wish you a very happy birthday. It has been a pleasure, and a privilege, to have performed alongside you (and Jim) Kick up a storm, Pat. At 97 years young, you’re entitled to. And grab a howlt of Emma if you see her!