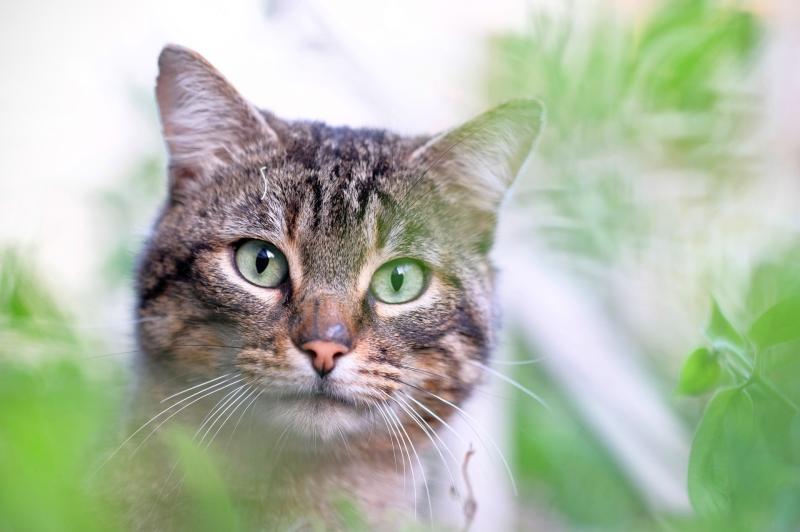 Cats can decorate a garden!

Up until last year I have always had an official cat in the garden.

I know they are thought to be a nuisance by many, and even a force for evil by some, but many will also agree that they are wonderful animals, clever, interesting and entertaining, if not exactly kind to their fellow creatures and too fond of turning sections of the flower border into a toilet.

However, weighing up the good and bad, I have always felt the positives, especially in terms of entertainment, outweighed the negatives. We also found that a collar with a bell, served to reduce the amount of harm the cat could cause to the local bird population – for as long as we could keep the collar and bell in place.

So, with regular removal of poo, and a cat collar, feline and garden got along quite nicely together. The cat decorated the place, looking good in the sun and rolling in mint to earn its living – a bit like a royal. However, the last official cat parted this world last year and the decision was made to live without . The local feral cat population had other ideas.

No sooner had the official gone to its rest than it was replaced by two irregulars, two wild kittens, which I think might have been born behind the garden shed. Anyway, they took to strutting around, like the landed gentry that they undoubtedly felt they were.

The life of a wild cat is precarious and two turned into one. I am not sure if the second was chased away, (they are not sociable animals) or met its end, but after a few months I was left with one wild cat, king or queen of all it surveyed.

Once again, I took to clearing poo from the beds, not altogether happy, but no amount of chasing and shouting had any effect. This interloper just looked at me from a distance, with a sneering disregard, and continued in residence.

Before Christmas however, it appeared with what looked like a broken leg. I thought it might die, not being able to hunt, so I put out some food and contacted the SPCA for advice on capturing it to bring in for medical care and spaying/neutering.

I discovered that it was housing itself under the shelter of a bulge of clematis, ivy and a great big fern on the north facing wall.

That was a month ago. The foot, it seems, was not broken but just strained as the cat is moving about, touching it off the ground with increasing ease. That, at least is a good thing but I have not been able to catch it for neutering and my poor fern is taking a battering. He or she has flattened all the dead fronds into a nice bed, dry in the shelter of the clematis and ivy.

Meanwhile, January, the time when I should be pruning back the loose ivy branches, is slipping by. I dare not chase it away – although not because it is a sweet helpless animal. It still looks at me like I am a bit of the dirt it just left in the flower bed.

I suppose and hope that the new croziers the fern is developing, are undamaged, but the job of getting in there to cut out the dead growth is not going to happen any day soon. Snotty as he or she is, I cannot turn the cat out of its convalescent bed. In the meantime, the bed in front of the fern and climbers, goes unweeded.

I had a little shrub that I wanted to put into it - an orange flowering Edgworthia chrysantha that I bought last year. This is the paper bush tree, a little shrub with fabulous looking, nicely scented flowers in winter. I tried growing the more usually seen yellow version several years ago and it is doing well.

So now I fancy the deeper coloured version and this corner would be - I think - suited to it. It is sheltered, semi-bright and the soil is good. I even got away with growing both ordinary dahlias and a tree dahlia in this spot in the past few years.

The tree dahlia did not flower but I do not think it would have flowered anywhere in the garden – our season is not long enough to give it the number of sunny days it needs to come into flower. The ordinary dahlias did flower. So I think this is a good bet for the edgworthia.

However, while the cat is in situ – it remains in a pot. I am waiting for him or her to head off for an hour or two on a dry day so I can plant it quickly.

Far from being the boss of my own garden, I am firmly under the thumb of a squatting and snotty cat. Not ideal…