Day in the Life of John Gibbons 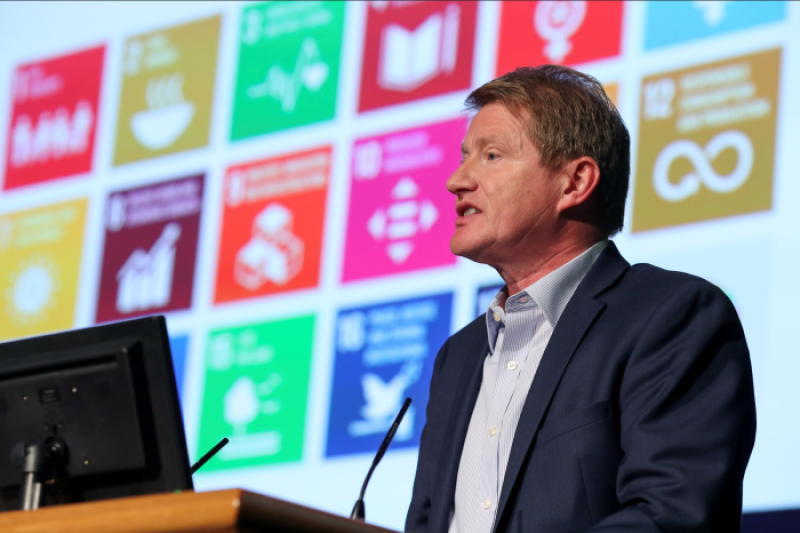 Day in the Life of John Gibbons

This week I met up with environmental journalist and commentator, John Gibbons. John has been writing and speaking about environmental and climate-related issues for the last decade and more, and is a regular specialist contributor to the Irish Times.

John grew up on a farm near Bennettsbridge, Co. Kilkenny. He has been living in Dublin for the past thirty years and is married to Jane. The have two teenage daughters.

He completed his primary degree in UCC and a Masters in Journalism in DCU. After working in national newspapers, at the tender age was 23 John was offered the editor’s job in a medical weekly newspaper. He went on to become Managing Editor of the Irish Medical News. After having a taste of being his own boss, John decided it was time (age 27) to co-found MedMedia Group, (1991) with Geraldine Meagan.

Over the years, this grew and expanded into a successful publishing and creative business, and is still his day job 29 years later; however, in more recent years, John has also poured much of his time and energy into environmental writing and campaigning.

John, why go from being a businessman to a campaigning journalist?

There was a phrase I once read: ‘activism is the rent we pay for living on the planet’. I’ve been very lucky, with a great career that's giving me a lot of opportunities and a good lifestyle, but I have come to the realisation through my environmental journalism that there are profoundly serious environmental issues out there.

As the dad of two teenage girls it really casts your mind forward into the next 10 to 30 years. When I look into my (science-based) crystal ball I see that we are going to have major problems. Just look at what is happening in Australia right now, unfortunately that is a foretaste of what is coming for the rest of the world over the next two to three decades unless we drastically change so many things about our lives and our lifestyles.

Morning – I have a 10 minute stroll to the office, near the seafront in Dun Laoghaire. I never tire of living near the sea. Some days also involve media interviews, so you always have to be briefed and ready, often at short notice.

Lunch – There are lots of places to eat locally. I usually walk 3-4km along the seafront with a colleague, the perfect way to get some fresh sea air and clear the head.

Evenings – I am out at meetings and speaking engagements several nights a week, but also enjoy a regular pint and chat with friends.

What were the main issues you saw happening to the world environmentally in 2019?

The hottest month ever recorded on Earth occurred in July 2019, during what has been yet another year of record-shattering extremes. France was hit this summer by two ‘once-in-500-year’ heatwaves in rapid succession.

In fact the five hottest years in recorded history have all happened in the past five years. I was in France this summer with my family on a low carbon holiday when it happened and we felt the heat of 41 degrees Celsius.

This extreme type of weather is supposed to only happen once in a lifetime, but in France, it happened twice in a month in 2019. The global climate system has moved from a very stable phase which it has been in for thousands of years, into a destabilising phase.

So the likes of Storm Ophelia and Lorenzo should never have come near the West Coast of Europe?

You are absolutely right, we are experiencing ever more extreme weather conditions e.g. extreme heat in one place and extreme flooding in another. Human actions have changed the fundamental chemistry of the Earth. There is only so much additional pressure that our global climate system can take before we switch from our current largely benign climate system into a completely new system.

Scientists call the current era the Holocene, which has run for about 10,000 years. It’s marked by very stable climatic conditions since the end of the last ice age, (approximately 12,000 years ago). In that time, humans and agriculture flourished. Then, at the start of the Industrial Revolution around 200 years ago, we started digging up and burning fossil fuels. Since then, human impact has exploded, as has our population. In 1820 we reached one billion humans; today, we number 7.7 billion, almost an eight fold increase in just two centuries. The by-product of our massive economic growth are vast amounts of carbon emissions.

What are the detrimental effects of carbon?

Carbon dioxide is a powerful heat trapping gas and the bad news as this stuff stays in the atmosphere for centuries. So things we do now will continue to impact the climate into many future centuries. We need to quickly figure out how to decarbonise our entire society’s way of living. Failing to do so means certain disaster.

What simple things can we do to change?

Frankly what we do as individuals are important on one level but globally they don’t really matter at all. Switching off mobile phone chargers and plugging out the TV etc., all this small stuff added together is really just a hill of beans.

What we need to do in Ireland is change our energy and transport systems completely. At the moment we are still digging up peat bogs to burn them. We are also burning millions of tons of imported oil and gas. So, no more open fires – we also need to move away from oil, peat, solid fuels, even gas. We need to heat our homes without burning anything, the

number one thing to do is to retrofit for energy efficiency. 1,200 people a year in Ireland die from air pollution, which is eight times more than die on our roads. Fossil fuel burning is not only destroying the climate, it is also killing 3-4 people in Ireland every day.

Is it too late for us to improve?

Ireland has to play our share, we are a wealthy First World country and our carbon emissions at the moment are about 60 million tonnes, which works out about 12 tonne per person, per year. 20 million tonnes of that is emitted from agriculture; you might say ‘that’s not me, I am not a farmer’, but if you are eating steaks, part of those emissions are yours as well.

So we need to rapidly change our agriculture systems, we need to move away from our over-dependence in Ireland on beef and dairy production.

What are beef and dairy farmers to do?

The average beef farmer last year received 158% of their income in subsidies. So for most farmers beef is not making them money. We need to financially reward farmers to be true custodians of the land and guardians of biodiversity. The current system does the opposite. We also need to pay farmers properly for producing quality, low-carbon food.

What about changes to our transport systems?

We have over 2 million private cars in Ireland. We need to change the transport model, make cycling safer, squeeze cars out of our city centres, which will in turn would increase footfall around our towns. High Street in Kilkenny would flourish if pedestrianised. Most parents won’t let their children cycle, as it’s not safe. In Holland there are 55,000 kilometres of safe and protected cycle paths. We need a culture shift.

Are you seeing a way out for Ireland?

We have a few things in our favour. Number one is the fact that we have an Atlantic moderate climate, so we are going to experience less of the kinds of extreme heat that France experienced this year, but we are very prone to flooding risks. We have a low population destiny, we have fantastic energy resources with our wind speeds. On a reasonably windy day, 60% of our grid power comes from wind. I would say we could increase this by 300% over time, and sell the surplus to the EU grid via interconnectors.

We need to look at the Dutch who are profitably producing food for people. In Ireland we are mainly producing food (grass) for animals, with almost no organic farming and little horticulture. 70% of the world’s surface has been cleared to agriculture and much of that is to feed 50 billion animals a year that we then eat. Feeding 10 billion humans by mid-century without destroying the biosphere in the process will be the greatest challenge we’ve ever faced.

The challenges ahead will need brave new thinking. The best time to have started towards sustainability was 20 years ago. The second best time is right now.