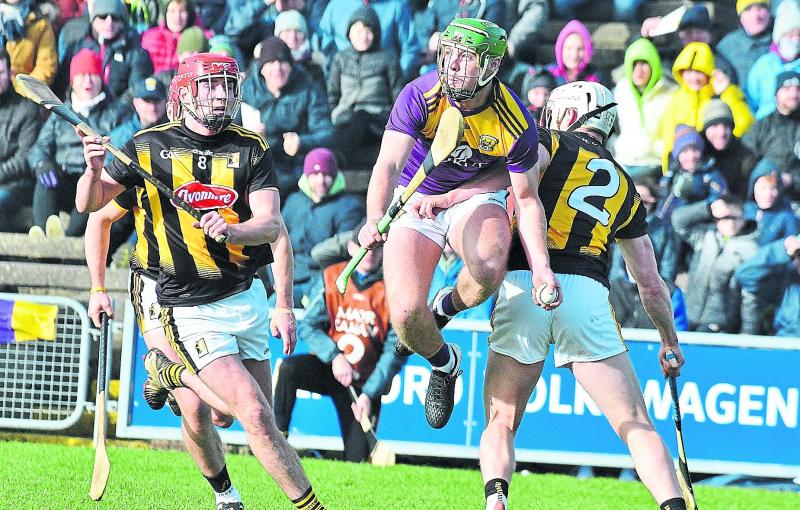 A friend took the scenic route to Wexford Park on Sunday. He went via Waterford to behold the new bridge in New Ross.

What did he make of it? “Long. I thought I was almost across it, then realised I still had a good bit to go yet.”

As a slightly contrived metaphor for what ensued in Wexford Park, that’ll do nicely. With three quarters of the journey elapsed, Kilkenny appeared on the cusp of having the job done.

It turned out that, unbeknown to themselves, they still had miles to go before they could sleep. In the event they couldn’t quite see out the trip.

Was it disappointing from a Black and Amber point of view that, 1-12 to 1-11 up with 20 minutes to go and a gale behind them, they failed to kick on? Clearly.

Was it vaguely disquieting? Even taking the usual caveats into account (the time of year, the weather, the identity of the competition), yes. Vaguely.

Was it surprising? Not in the least.

Wexford had the luxury of big names on the bench and they made full use of them. On trotted the made men.

Lee Chin, Diarmuid O’Keeffe (both current All-Stars), Rory O’Connor and Matthew O’Hanlon. It sufficed to turn the tide and win the day.

Kilkenny, in contrast, didn’t have the luxury of big names on the bench and thus couldn’t make any use of them.

But imagine the lift that the introduction of TJ Reid, Padraig Walsh, Adrian Mullen and, say, Paul Murphy or Joey Holden would have provided had the boot been on the other foot.

One other advantage the hosts had was familiarity with their own system of play. No surprise, that, obviously, given that they’ve been operating this way for four years under Davy Fitz.

They’re a counter-attacking side who play better against the wind than with it.

They invariably defend in depth in their own half of the field; they frequently leave vast tracts of space unoccupied in the other half of the field, only to hit these spaces with untracked runs from deep.

What may look extemporaneous about Wexford is precisely the opposite: each player knows where he should be at any given moment and has rehearsed his movements a thousand times. Davy has his players choreographed up to the eyeballs.

It was even less of a surprise then when, with the teams level four minutes from the end, O’Keeffe popped up out of nowhere on the left to put the Leinster champions ahead. That familiarity with the system.

Here’s a few other takeaways from the proceedings.

To hold that the outcome means that Davy Fitz has Brian Cody’s number would be trite - yet there’s something in it nonetheless.

A more accurate way of expressing it, perhaps, would be to say that Davy’s Wexford are better than Cody’s Kilkenny at the moment and have been for quite a while now.

Last Sunday made it three wins out of five meetings in the National League, to add to two wins plus one draw out of four clashes in the championship. (Davy would doubtless add that Kilkenny’s victory in the provincial round robin at Nowlan Park two years ago came about because his lads, playing for the third weekend in succession, ran out of gas in the closing 15 minutes.)

Clearly they’re an item on Kilkenny’s agenda again, as well they ought to be. Billy Ryan might have scored one shortly before half-time and did score one shortly after it.

It’s not hard to imagine what DJ Carey has been saying to him on the training field. Head straight for goal – something DJ made a career out of himself, of course.

Finally, Richie Hogan. Richie scored three points from play, which was much less remarkable than the fact that Richie was there to score them in the first place.

It was the first time he’s been involved in the League this early in the season since 2016 and he’s feeling suitably good in himself.

Just imagine if he can maintain his fitness for the rest of the year. He won’t know himself. We may not know him either.

Davy and Cody lock horns again at Nowlan Park on June 13. That’ll be the evening for Kilkenny to make it all the way across the bridge.