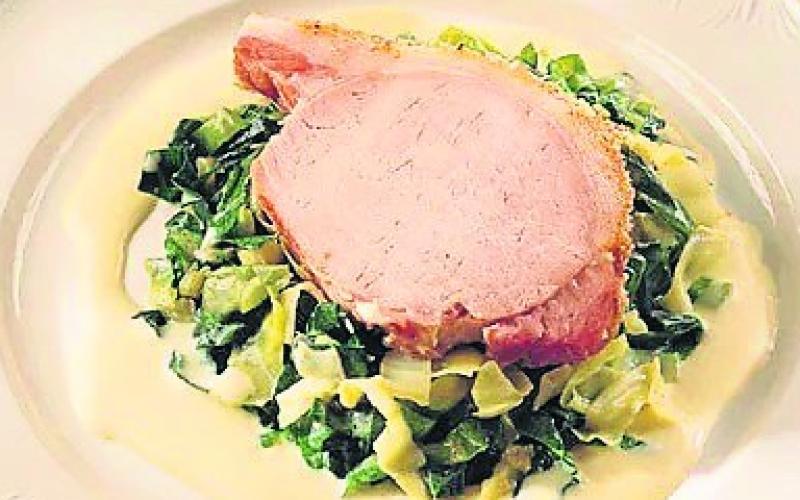 St Patrick’s Day is probably going to be a little quieter this year, with fears of catching coronavirus leading to the cancellation of the annual parade in Kilkenny, and other towns and cities, as well as other social events.

It’s a good reason to stay at home and cook a nice dinner to mark our national day.

Bacon and cabbage really is the traditional Irish dinner and perfect for our national holiday.

Chef Tom Comerford at the Kilkenny Ormonde Hotel has generously shared his take on the traditional dinner with us. Thanks to his top kitchen tips and flavours your St Patrick’s Day dinner is sure to be a winner!

METHOD
Place bacon in a large saucepan, add the chopped vegetables and peppercorns. Cover with cold water, bring to boil and simmer gently for approximately 25 minutes per kg.

When cooked, remove the joint, keeping your liquid. Remove rind then score the fat, place it on a roasting tray, spread with mustard sugar and butter. Put into a preheated oven at 180C.

To make the sauce, melt the butter, add the flour and mustard and cook for two minutes. Whisk in the 250mls of bacon cooking liquid and cream, bring to boil. Reduce the heat and simmer for four minutes, taste for seasoning then add parsley to finish.

To cook the cabbage, place it in a saucepan and cover with the remainder of the cooking liquid. Bring to boil, reduce and simmer for three or four minutes. Drain well toss with knob of butter, salt and pepper.

Cook the potatoes in salted water.

When fully cooked, drain and pass through a potato ricer, if you have one, or mash.

Add in softened butter and hot cream, season with salt and pepper. Done!

Anyone who has been in the USA for St Patrick’s Day might have been surprised to be offered corned beef and cabbage as the ‘traditional’ national dish of the Irish.

The reason for the menu change is said to date back many, many years, to a time of mass Irish immigration to the USA.

The first generation of Irish-Americans were in search of the comforting taste of home - bacon and cabbage. But immigrants were too poor to afford the high price of pork and bacon, then a relatively more expensive meat.

Instead, they turned to the cheapest cut of meat available: beef brisket. New York was a melting pot for immigrants from around the world, and the Irish picked up cooking traditions that they blended with their own.

Rather than boil the beef, the Irish adopted brining from Eastern Europeans, which is a way of salt-curing meat.

And the corn? Well, ‘corned’ has nothing to do with corn but instead refers to the corn-sized salt crystals used during the brining process. The corned beef was paired with the cabbage and a new culinary tradition was born.