A 'day in the life' in Italy with Gio Ferrari

Gio's parents are in lockdown in Italy. Gio tells it through their eyes 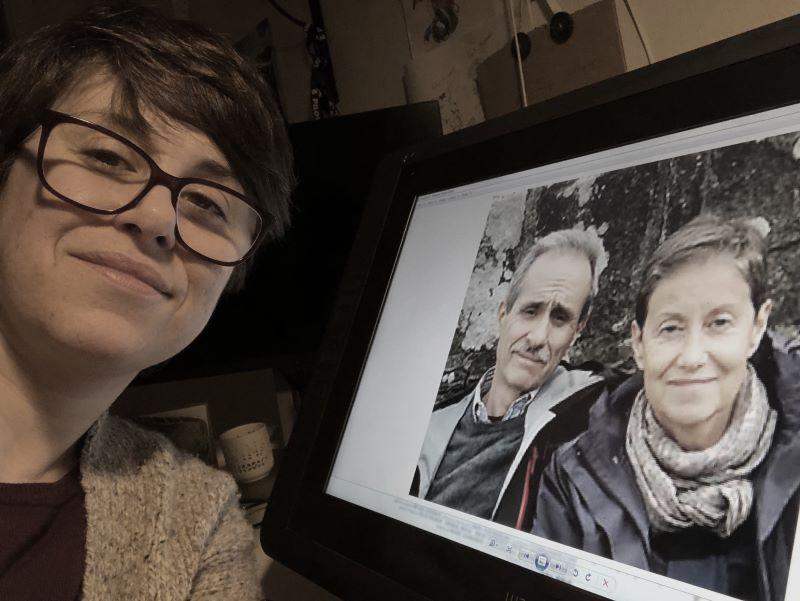 Gio speaking to her parents in Italy by Skype

Gio Ferrari, originally from Italy, has been living in Kilkenny for five years. She works in Cartoon Saloon and her daughter attends my son’s primary school here in Kilkenny.

As the schools closed on Thursday, there was a lot of confusion among parents on what we should and shouldn’t do regarding social interaction. Gio raised a really important point with us, a plea that didn’t go unheard as she sent this text to our what’s app group - “we need to do more than what the Irish Government is asking of us. This is coming from an Italian with family in the affected areas”.

So I reached out to Gio (by phone and email) about the current state of affairs in Italy and asked her what life is like for her parents living in lockdown.

Gio, all the reports are saying that Ireland is just two weeks behind where Italy. What is Italy’s current state with the virus?

Around the February 23 (so 3 weeks ago) the government created the so called “red zones”, local lockdown areas around the villages in Lombardy, in the north, where the virus was found with tests.

They tested a lot of people in order to track the virus, hoping to stop the spreading by tracking the people. That didn’t work. This virus is too fast and it turned out some people who had no contact with the first cases developed it. This is when it became clear that tracking was not enough and they put the whole of Lombardy in a mild lockdown on March 8. But with people still moving around it became clear that it wasn’t enough. This is when, on March 10, they decided to enforce the lockdown on the entire territory of Italy.

What part of Italy are your family from? My parents are in Bologna, in the north of Italy, and they are in their 70s. My mum has a heart condition and they have been in isolation since the March 11. Luckily no one in my family is currently sick with coronavirus. We call each other every day since the beginning of the crisis.

How scared are your family?

In some sense the lockdown has actually helped ease the fear in Italy. Everyone feels safer now that they are in lockdown than before. Everyday life is boring, but safe.

My parents are aware of the danger without panicking, they stick to the recommendations and they know this is all they can do. They do their best to keep the morale up. They try to reach out to others via social media a lot and keep themselves busy with books and movies. I’m worried because if something happens to them, I cannot travel to assist them and I am a single child.

They are trying to be patient. My dad is still a teacher at university and is now working remotely. For instance, his students discussed their graduation thesis on skype yesterday. My mum’s routine hasn’t changed too much, because of her health she was already isolating, but she misses her medical therapies.

Do the Italians wish they could have done things differently when the outbreak was first announced in Italy?

At the time, no one could imagine how fast it would spread, or the fact that people wouldn’t take the recommendations seriously and keep socializing or traveling. Here in Ireland we have that chance, we have seen Italy and we should move faster than Italy did. People should really take this seriously and refrain from socializing and keep home as much as possible.

Health care services in Northern Italy are amazing (second best in Europe) and two weeks of virus has put them on their knees. Ireland’s health system is not as resilient and we need to be really aware of the fact that our own behaviour makes the difference to the wellbeing of our whole community.

Pubs, shops, museums, shops, cinemas, gyms, swimming pools, parks, restaurants, and bars are all closed. With regard to hospitals and GP’s, only one patient at the time can be in the waiting room. Pharmacies and food shops are open but only for restricted numbers.

You cannot go outside for any reason, not even a stroll, unless you are going for food shopping, the pharmacy, or having an emergency. You need to bring a document and a filled in form with you at all times, with the date, time and reason why are going out. If you are found outside without the completed form you can fill it in with the police. However, if you are found lying you face a heavy fee and legal consequences. Public functions are suspended too. No funerals or weddings are allowed. You cannot bring your children out.

People are panic buying food here in Ireland. How restrictive is it to get your food shop done in Italy?

Food shops are open but they allow only a small amount of people at the same time, so you queue outside and keep one meter of distance, before entering the shop. There is enough food, you can find everything you need. When outside, you are supposed to wear a mask but they are impossible to find so people got creative and use scarves or other (sometimes hilarious) devices.

Is there still a state of panic in Italy or are people started to accept it?

There has never been panic, there has been disbelief. Now people have accepted that they really need to stay home, and they are trying to keep up. It’s still the beginning so in general people seem quite upbeat, the internet is full of very funny videos and memes made by Italians in lockdown and the singing from the windows is becoming a daily moment of unity, a hug of the soul that resonates in all the cities. The most affected areas are full of sadness for the losses and the fact that it looks like a war zone is really upsetting.

We heard rumours in Ireland that when the school’s first closed in Italy, a lot of the Italians continued to socially interact. Some even went on holidays. Is that true?

Yes absolutely true. Some people didn’t really get the seriousness of the situation. That made the virus spread so much.  Some thought of the school closed as a sort of holiday. And honestly I think Ireland is doing the same mistake. I have seen a number of kids out and about after the decision of closing schools. If children keep gathering then closing schools is useless. If people keep moving about and going on trips, then advising to stay home is useless.

Do you think Ireland is taking it seriously enough?

No, not yet. I don’t say it lightly, I too thought the Italian government was exaggerating at the beginning, I thought it was just a bad flu. I started to realize how bad it was when I saw the situation inside the hospitals thanks to a TV program and when I heard the stories of doctors talking of the situation inside hospitals I know (Bologna sant’Orsola for example).

I was shocked to see that all beds where turned into “coronavirus” special beds. There are so many really bad cases that artificial respirators are running low. Which is surprising for a place like northern Italy, we usually have that stuff. I thought about Ireland and the lack of beds, nurses, ICU beds and realized that here it would get bad even faster than in Italy.

I heard people saying “ah well, Italy is a messy country”. Well, no. I lived in four different European countries and I know that the hospitals in northern Italy are the best ones I have ever seen. And two weeks of coronavirus put them on their knees. It’s unbelievable. It’s so scary.

What lessons can we learn from Italy?

To act fast, I know we are afraid of hitting the economy but Italy is the proof that the longer you wait the more it will cost. And to respect the restrictions. If the experts tell you to stay home, stay home.

What would you like to see Ireland doing more of?

Social isolation. I think the government needs to make hard decisions that will help companies and industries to cope with the economic aftermath of a lockdown. The sooner we go in lockdown, the slower this virus will spread, giving everyone higher chances of survival, it’s as simple as this.

If your family had a message for the Irish, what would it be?

To act faster than Italy did.