Community 'blown away' by generosity of Callan Bacon 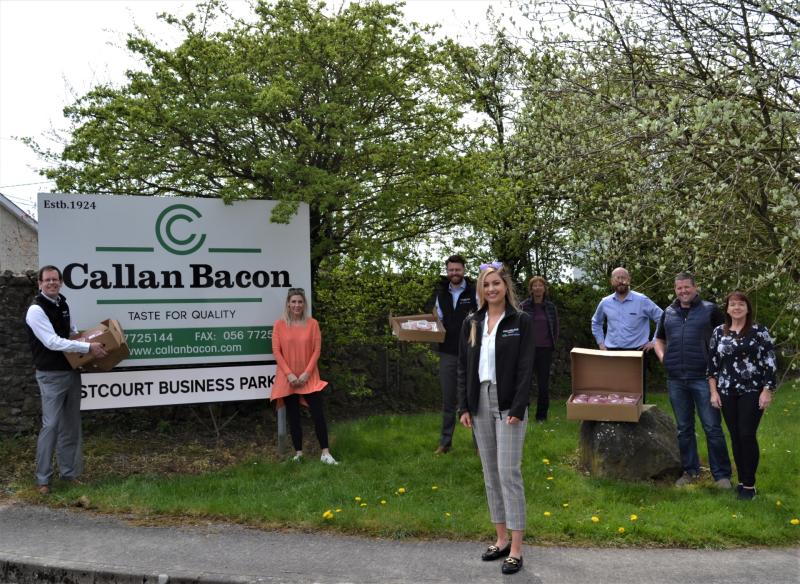 Businesses in Callan are pulling together with the local community to make sure everyone is supported in these unusual times.
From treat cakes to groceries, special deliveries are being made by an army of volunteers to make sure nobody is without essentials or company.

One company that has been at the heart of the community for almost a century is making a huge contribution to the effort.
Callan Bacon are providing products free of charge for distribution by the Callan Support Group.
“What they offered is so much greater than what we imagined any business would come forward with,” Claire Somers of the Callan Support Group (CSG) said.

Callan Bacon contacted Claire two weeks ago and offered to provide bacon products to the CSG to distribute to those in the community who are cocooning and as part of a discreet groceries scheme for those that are struggling.
The first week was a trial run. Callan Bacon supplied the group with 30 hams and 30 packets of rashers. These were distributed to people over 70 in the community who, in the past, had family working in Callan Bacon.

This week Callan Bacon gave 140 products for distribution, including ham, gammon and rashers, and they’ve committed to supplying products for the next few weeks.
It was all hands on deck on Saturday morning, when volunteers met at John Lockes GAA Club to make deliveries. There are more than 50 volunteers in the CSG and they were “blown away” by the generosity.

Clarissa O Nuallain, of Callan Bacon, said as a company that has been a part of the community since 1924 they wanted to give back.
“It’s really important to highlight our employees are the reason why we are able to give this donation,” she said. “They are the forgotten heroes. They work hard every single day to bring us food.”

More than 250 people are working in Callan Bacon where the company has taken measures to ensure social distancing and HSE recommendations are followed. Start times have also been staggered to protect the health of employees.
Other businesses in town have given great support to the CSG.

Most businesses still open have offered help in some way - including L’Arche cafe, who bake ‘cheer up’ cakes for people cocooning; SuperValu who are giving the ingredients for free; local grower Vinnie Grace, Premium Foods, Murphy’s butchers and Lyons fruit and veg shop, who are providing supplies.