Mackey's of Gathabawn - a Kilkenny pub serving up dishes in a socially distanced, post lockdown world 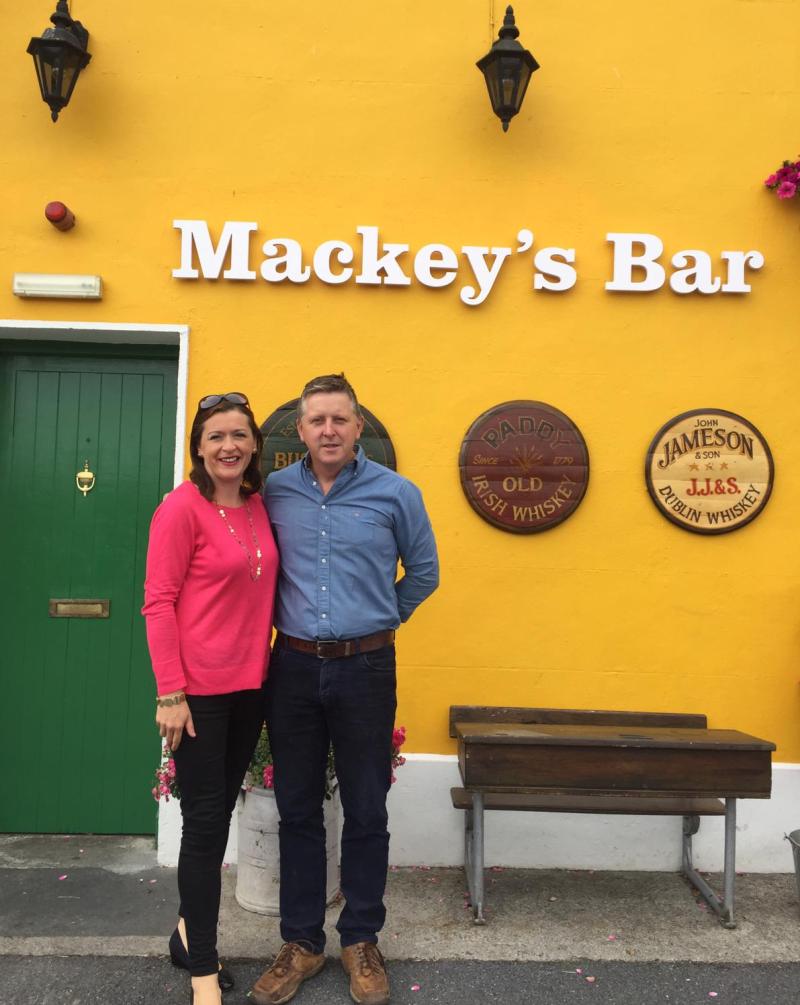 Margaret and Richie Mackey outside their pub in Gathabawn

Going from Sunday lunches to a four-night-a-week restaurant and take away service is a big change for Mackey’s of Gathabawn, but it’s a chance owners Richie and Margaret had to take, despite the sleepless nights.

“We were selling food pre-lockdown but it was just Sunday lunches and we might do a curry night or a steak night if there was an international match on or we had a bus tour,” Richie Mackey explained.

“When lockdown came we thought we would be closed for two or three weeks. Then months passed. When June 29 came I wasn’t clear about the 90-minute rule and we have so many friends and neighbours, who have been coming here for 40 years, I didn’t want to put them on the clock. We said we would wait until July 20, the original date for pubs to reopen. But then that was delayed and I said ‘we have to go’.”

They were lucky that they had a kitchen. They also have their own pizza oven, make their own dough and can do take-away food. On a weekday Mackey’s offers pizza or a meal like bacon and cabbage or beef. On a Sunday they still do a full menu. It helps that Richie’s wife Margaret is a trained chef.
Reopening was a decision Richie took very seriously. He spoke to other publicans for advice and admits it kept him awake at night.

“We have to look after our workers because we have nothing but local people,” he said. “We know everyone going in and out, we hurl with the one club.
“I would hate to see any of my staff pick it up,” he said of the coronavirus. Paranoia is driving them in some way, to make sure everything is clean. 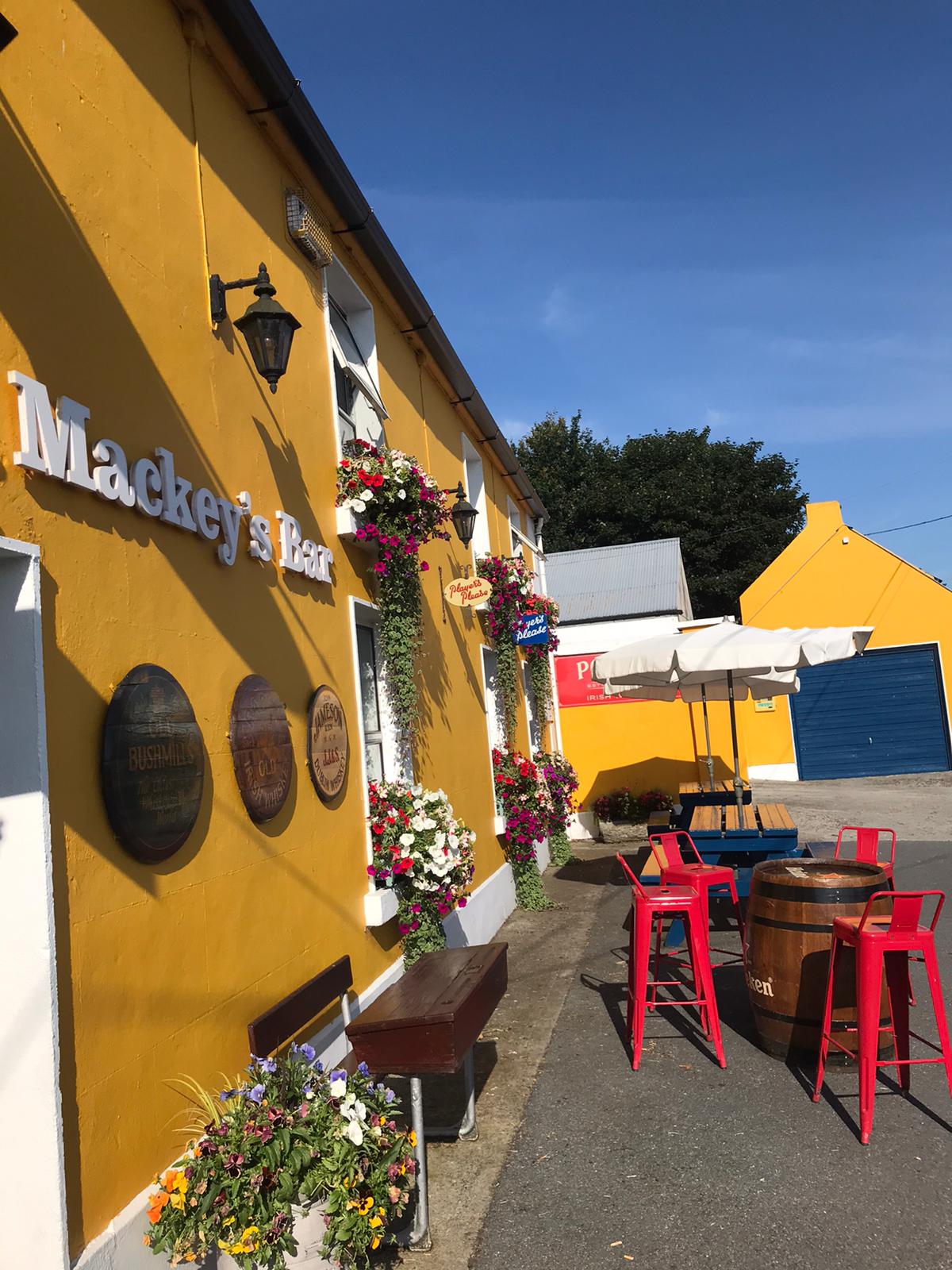 Mackey’s is currently open from Thursday to Sunday, 4.30pm until last orders at 8.30pm, and Sunday lunches 12.30pm to 4pm.
All the tables are two metres apart, except on Sunday when tables are one metre apart, then the 90 minute rule is applied.
Mackey’s are also fortunate they have a yard area and car park where they can put tables. All tables must be booked in advance and Mackey’s have a WhatsApp group with more than 200 people from the area. Customers text what time they want to visit.

“I have found the public to be very good and gracious,” he said. “When the 90 minutes is up people have been very good and moved on.”
Richie thanked the HSE and Gardaí for their help.
“They were very good to us. Gave great advice that gave us the confidence to open.”

The government wage subsidy has also helped.
“We wouldn’t survive without it,” Richie said. He said it’s a good thing to have and should be in place for 12 to 18 months.

Read also: A harbour in the storm - Fennelly’s of Callan is delighted to see customers again

The reopening of Mackey’s means five people now have jobs - Richie and his wife Margaret and three local women. They took on an extra person because of the additional Covid regulations, and if they can reopen for seven days Richie thinks he might have to hire a fourth woman. “That’s a good complaint,” he said. Keeping jobs and the local economy moving is important.

This ‘new way’ of doing business is working well. But ‘normal’ business has disappeared. Mackey’s would have been very popular for birthdays, stag and hen parties. But “everything is on pause for now”.
There are 30 different parties in the diary that didn’t happen this year. “We go week to week here now. All we can do is our best. Once you have the support of the local people that means a lot.”
Richie said there is a good community in the area and he would like to see the pubs reopen in Freshford, Galmoy, Johnstown and other neighbouring parishes.

“The whole lockdown has created a lot of scenarios and obstacles you have to work through and tease out, every pub is different,” Richie said.
Richie said bars need government support packages, not for the business already lost but to get them through to next summer.

Mackey’s is a country pub. Before the lockdown it would have been the older people in the area, the generation over 65, who came in from Monday to Thursday.
“Now they don’t seem to be too inclined to come in, they are very cautious,” Richie said. “That would be a concern for me. They would have been the ones who would have come in Monday and Tuesday, when people were away at college or at home minding children. Going forward, Covid could be the death knell of Monday/ Tuesday opening.”

Richie admitted his biggest fear was that by reopening the doors of the pub they would ‘burn more cash than being closed’. The County Council were quick to provide a restart grant that covered the cost of screens and some extra tables, which Richie is grateful for.

For the moment Richie says that while it’s not ideal, it is definitely worth being open.
“I’d love to get the nod from Dublin that all pubs can open again, that everyone could socially distance at one metre,” he said. “That would suit me a lot better and a lot of other publicans.
“It’s not ideal but it’s worth being open, for us. For some publicans it’s just not viable. They are probably right to stay closed.
“I don’t think we will ever make up what we lost in the last five months, but I don’t look back. What’s gone is gone.”