Loving wife and mother for whom family was everything 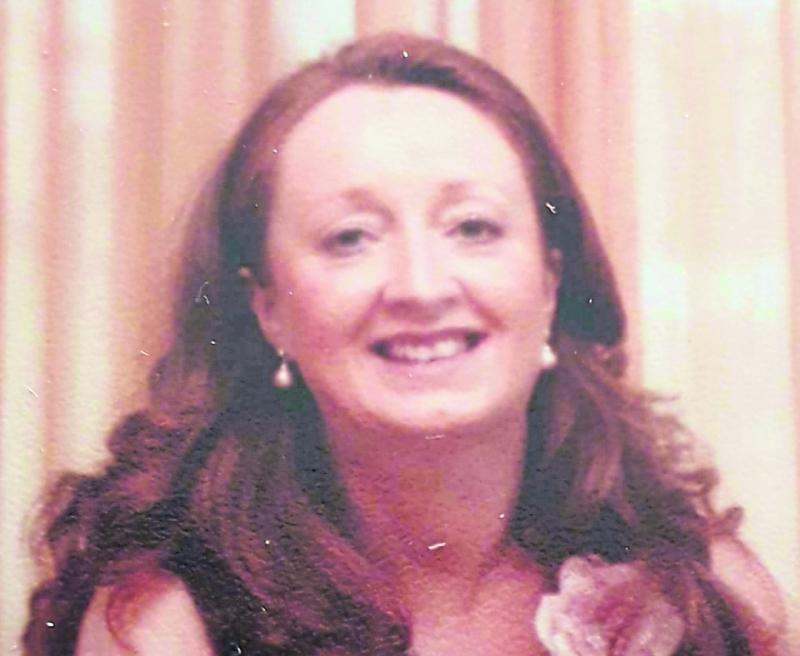 The life and selfless dedication to her family and friends was celebrated following the death of Miriam O’Neill, who passed away on January 16 in Aut Even hospital following a brave battle with cancer.

Miriam O’Neill (nee Maher) was born on February 8, 1970 to parents Paddy and Mary Maher. She had one older brother Richard.

Miriam was raised in Newlands, Danesfort. Her mother Mary died in 2001 and her father Paddy died in 2015. Miriam was very close to her parents and missed them both when they passed away. She proudly displayed many photographs of them in her home.

Miriam attended St John of God National School and then went to the Presentation Secondary School in Kilkenny where she met lifelong friends.

On completing school Miriam started work in the Monster House and then went to Graham Shoes. In 1993, following completion of a secretarial course, she started to work with the HSE at Head Office, Dublin Road, Kilkenny where she spent the next 23 years until she retired due to ill health. Miriam made many friends during her time in the Health Board and regularly kept in contact with them after she left.

Miriam met her future husband Tony in 1991. They got married in 1996 and moved to Paulstown where she lived happily with Tony and their two sons, Stephen and Kieran.

Miriam was a very much-loved member of the O’Neill and Maher families. She was a devoted wife to Tony, loving mother to Stephen and Kieran, caring daughter-in-law to Mary, loving sister to Richard and a kind sister-in-law and aunt.

She never forgot any of the family birthdays or celebrations. She always acknowledged any achievement with her many nieces and nephews and celebrated with them when they had a birthday, passed an exam, or sat their driving tests. Miriam always showed an interest in their hopes and dreams for the future and helped many of the family in completing their Curriculum Vitae and giving them career advice.

Miriam and Tony’s son Stephen was born with special needs and from the very beginning she worked tirelessly to ensure that he received the very best of care and education.

She fought every step of the way to make sure that Stephen was given every chance to be as independent as possible.
Miriam was very involved in the opening of Sapling’s school, Goresbridge and fundraised tirelessly over the years to support the school. From Saplings, Stephen moved to the Beam Services in Bagenalstown. Miriam was so happy with both Saplings and Beam and was delighted with the progress that Stephen has made and continues to make.

Miriam made many friends over the years with the staff and truly appreciated all the support she received from these services. Miriam also made great friends with the parents of the other service users over the years and found that she got great support, advice, and comfort from this network of friends.

Miriam was extremely proud of her other son Kieran. She followed him in all his many sporting events and proudly displayed all of his medals and trophies. She always took an interest in whatever sport he was involved with and encouraged him to study hard at school. It was a great moment for Miriam when she watched Kieran hurling with the Kilkenny minor team in Croke Park. She loved the kind, caring young man that he has become.

Miriam was very close to her brother’s children – Laura, Emma, Erin, and Daniel. She loved spending time with them and always enjoyed their shopping trips and visits to the cinema. She was very proud of them all and always spoke so highly of them.

During the last few months of her illness Miriam loved her ‘pamper sessions’ with the girls and looked forward to their visits. She knew they would spoil her and Daniel would keep her entertained with his funny stories. Richard’s wife Dympna cooked tasty dishes for Miriam to help keep her strength up. These visits were always so special to Miriam especially in the last few weeks before she passed away.

Miriam was a warm, kind, gentle and caring person. She had many friends from all walks of life and met with them regularly for a coffee and a chat. She loved keeping connected to them all with her mobile phone.

Miriam had a great sense of style. She loved clothes shopping and would often take shopping trips into town. She knew exactly what colours suited her complexion and beautiful red hair. Miriam took great care of her skin and enjoyed going for a facial or a massage and found great relaxation in these outings especially when she was recovering from illness.

Miriam first became sick in 2015 when she was diagnosed with cancer. She had both chemotherapy and radiotherapy which at times was extremely hard on her. She took great pride in the colour of her hair and was proud of her long red hair.

When receiving chemotherapy Miriam had a fear of losing her lovely hair and opted to use the Cold Cap Treatment. Many patients find this treatment too hard as the temperatures in the Cap are very low, but Miriam endured the treatment and kept her lovely hair.

Following treatment, Miriam was given the all-clear but sadly the cancer returned three years later. This time there was no treatment that could stop its progression.

Miriam fought her illness with dignity. She never complained even when in pain. If asked how she was she would say ‘I am fine’.

Miriam got great support from her GP, Dr Aoife Coady, who went out of her way to ensure that Miriam received the highest standard of care and was always available whenever needed.

From November the Kilkenny Home Care Team became involved in Miriam’s care and they provided great support to the whole family. Susan Murphy, a member of the team, was a great friend to Miriam and Tony and was always available to answer any of their worries or concerns. Fr Jimmy Kelly also called to the house regularly with spiritual support for the family.
Towards the end, Miriam had to be admitted to Aut Even hospital. When in hospital, even though she was very weak, she remained the woman that she always was by thanking the nurses with a smile on her face.

Sadly, Miriam lost her battle with cancer in the early hours of Saturday, January 16 and passed away peacefully with Tony by her side.

Miriam returned home to be waked in her house. Unfortunately, due to Covid-19 restrictions only close family members could attend the wake.

On Monday, January 18, Miriam made her final journey from her home. The neighbours lined the road as the hearse left the house for the Church of Assumption in Paulstown. The mass was celebrated by Fr. Jimmy Kelly.

Again due to Covid-19 restrictions, Fr Michael Doyle (family relative) and Br Ignatius (family friend) were unable to attend the mass, but arranged masses and prayers for Miriam in their own parishes. The mass was live streamed over the internet for those who were unable to attend due to restrictions. This also allowed Miriam’s aunts, Teresa, Ellie, Peggy, and Sally watch the mass from their homes.

The mass celebrated the life of Miriam. Although she was taken from her family far too soon, they wanted to celebrate the life that she lived, the memories that she left them with and for them to let everyone know what an important part of the family Miriam was.

At the start of mass, a poem was read out about a little robin bird singing a song that gives hope to the future and how one day we will all meet again.

Gifts offered to the altar included Miriam’s make up bag and hairbrush. This was carried by Emma and represented Miriam’s love of her pamper sessions with her nieces.

Nicole carried a picture of Miriam’s pet dogs who she loved very much. Erin carried Miriam’s mobile phone, which was never far from her hand.

Maria brought up a box of Lily O’Brien chocolates, representing her love of chocolate and Stephen carried up a family photo of her and her ‘boys’ as she called them. Family was very important to Miriam.

Fr Jimmy spoke some very kind words about Miriam which made the whole mass feel personal to the family. The Eulogy was about Miriam and the wonderful person she was.

There were words of thanks for all the people that helped Miriam with her illness, for her many friends who always kept in touch, for the extended family, neighbours, and the people of the parish for all their love, support, friendship and offers of help and to Johnson Funeral Directors for their professionalism. The kindness shown to the family will never be forgotten.

Miriam’s nieces Laura, Emma, Erin, Ciara, Nicole, Caitlin, and Lauren stood on the altar and each spoke about what Miriam meant to them. A message from Aunty Sally in London was also read out.

At the end of the mass Laura read the poem “A Letter from Heaven” which was given to the family by Br Ignatius.
The family walked behind the hearse to the graveyard. The people of the parish lined the road and Barrow Rangers carried out a guard of honour. The staff from Saplings and Beam also stood on the roadside saying their farewell to Miriam. The family are so grateful for all of this support during such a hard time in their lives.

Miriam will be sadly missed by so many people. She will never be forgotten and we will always remember her with love and think back on all the good memories. Rest in Peace Miriam.
- Teresa Cole