Top entertainment in our Up Close and Personal Christmas special 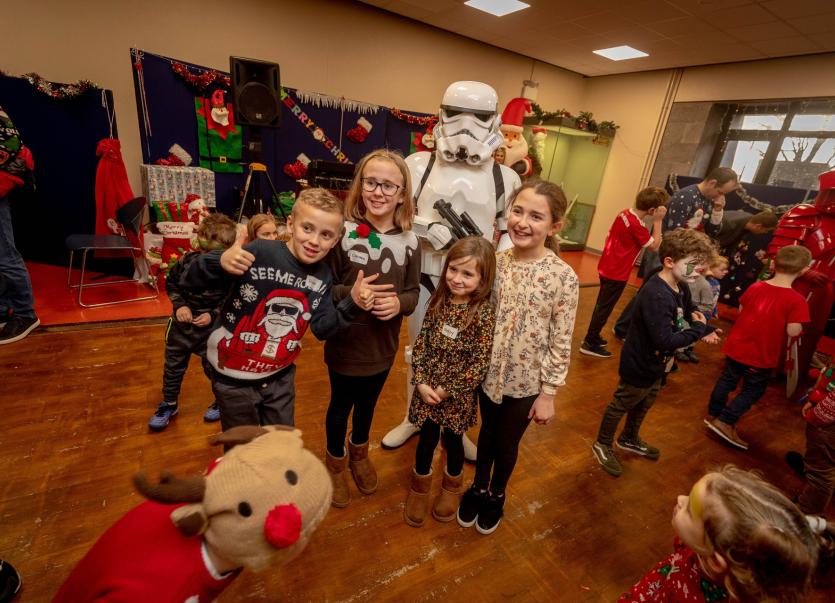 Members of the The 501 St Legion Ireland Garrison, Star Wars characters at the Christmas family day at James Stephens Army Barracks as part of Yulefest, pictured with Rian , Caoimhe , Molly, and Mia

Christmas arrives in a few days time, most of the work parties are over leaving plenty of time to catch up with family or friends.

Why not add a little live music into the mix, there’s loads to choose from over the next few days. No matter your interest or where you’re based in the county you're sure to find a gig to enjoy with plenty of festive fun.

This (Wednesday) evening the Christmas Country Concert Tour rolls into the Springhill Court Hotel from 7.30pm. Join MC Brian Cunningham as he brings you through a trail of talent including Philomenia Begley and band, Louise Morriseey, Dominic Kirwan, Aidan Quinn, Colm Kirwan, Rory Kirwan and Stacey Hogan.
If Sweden’s best known song-makers are more your thing, then catch the second offering of the ABBA Forever Christmas Show at the Watergate Theatre from 8pm.

While Alchemy presents Christmas by Candlelight at St Canice’s Cathedral from 8pm in support of Taxi Watch. Special guests include Michael Hayesand Fionn Gardner with an appearance by Taxi Watch’s Derek Devoy.

Thursday has a lunchtime Christmas Classical Concert at Kilkenny Castle’s Picture Gallery. But, if you’ve not already expressed an interest in this it looks like you’ll now not get in as it’s fully booked for its 1pm start time.

The Watergate Theatre hosts a sing-a-long and screening of The Greatest Showman from 4pm.
Hermitage Green kick off their last five gigs of the year by playing Set Theatre at Langton’s from 8pm.

The Christmas Songbook opens at Billy Byrne’s from 9.30pm as Honor Heffernan & Jim Doherty take over The Sofa Sessions. They’re joined by Dave Fleming and Cormac Larkin. If you‘’ve been a fan of the weekly event or you’ve yet to discover its greatness, then why not swing by.

Following last week's hugely successful performance from the Lady Desart Children's Choir, the adult version is in action this Friday. Churchill National School is again the venue for the concert which starts at 7pm. If you were around MacDonagh last Saturday you'll have gotten a bit of a taster of the talent that will be on show.

Moira’s Open Mic night is at the Home Rule Club offering up a great opportunity to enjoy some music while checking into one of the county's oldest venues.

The Waterloo ABBA tribute at Kyteler’s Inn kicks off at 9pm in the Courtyard bar.
If you like your nights loud and full of fun then Papa Zitas play Left Bank from 10pm.

On Saturday there's a second sing-a-long and screening of The Greatest Showman at the Watergate Theatre from 2pm. Mary Kelly leads a Christmas Harp session at Kilkenny Castle from 3pm.

There’s an evening of traditional music with a twist and a few surprises at the Orchard House from 7.30pm. Laochra Oga perform there with proceeds to the Kilkenny Christmas Centre, The Rock. Jack Lukeman brings his Northern Lights show to the Watergate Theatre from 8pm with songs for the Winter Solstice.
Martin Lacey plays the bar at the Home Rule Club.

At the same time local outfit The Presidents play Hackett’s Bar from 8pm.
And Riff Shop take over Left Bank from 11pm.
Sunday starts with Cantoiri an Rataigh at Kilkenny Castle from 2pm followed at 3pm by soprano Muireann Mulrooney with Margaret Murran on piano.

HamsandwicH play Set Theatre at Langton's from 8pm. Hackett’s Bar hosts Rob Strong from 8.30pm. It’s free to attend but tickets in aid of the Good Shepherd Centre will be sold for a raffle on the night, costing €2 or three for €5. All proceeds will go towards helping local homeless.

Most of the pubs and venues will ease things off a little on Monday but there’s still time to get in for an early Christmas Eve chat. While Christmas Day sees the doors closed as those who help us party take a well-deserved break.