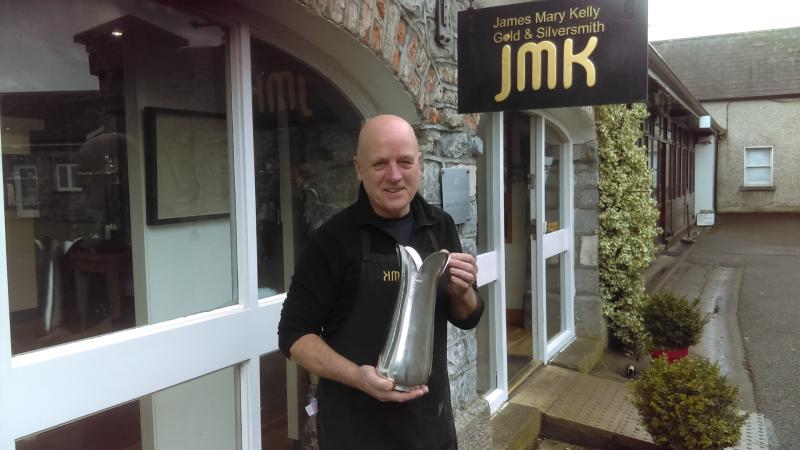 James Mary Kelly with the floral vase outside his studio and shop in the Castle Yard, Kilkenny

It took master craftsman, James Mary Kelly five years to complete what is a classic piece of silverware.
The Kilkenny city man has produced a magical, plain, floral vase from a single piece of metal, weighing one kilogram.
It will now go on display in the National Museum of Ireland’s Collins’ Barrack in Dublin.
It was commissioned by The Design and Crafts Council of Ireland, for their permanent, contemporary collection.
Like all beautiful pieces, it is outwardly simple in design with petal tops, square base and a ‘planish’ finish on the exterior.
Planish means it was flattened with a smooth faced hammer, giving an almost fish-scale like effect which adds to the mystique of the piece for which there is no cost given. There are few artisans as well qualified to do such painstaking and intricate work.
The reason that it took so long to complete is down to James Mary being so busy.
“Every time I had a bit of spare time I went back to it and I think the extra time was central to its success,” James Mary, who is based in the Castle Yard, opposite Kilkenny Castle, said.
The Village man is a product of the legendary, Kilkenny Design Workshops which has had such a positive impact on Irish craft and design, producing people of James Mary’s calibre. James has been a goldsmith for over 50 years and intends to celebrate the milestone with an exhibition later in the year.
His son, Neil, an established master craftsman in his own right, works with his father, ensuring the tradition lives on.