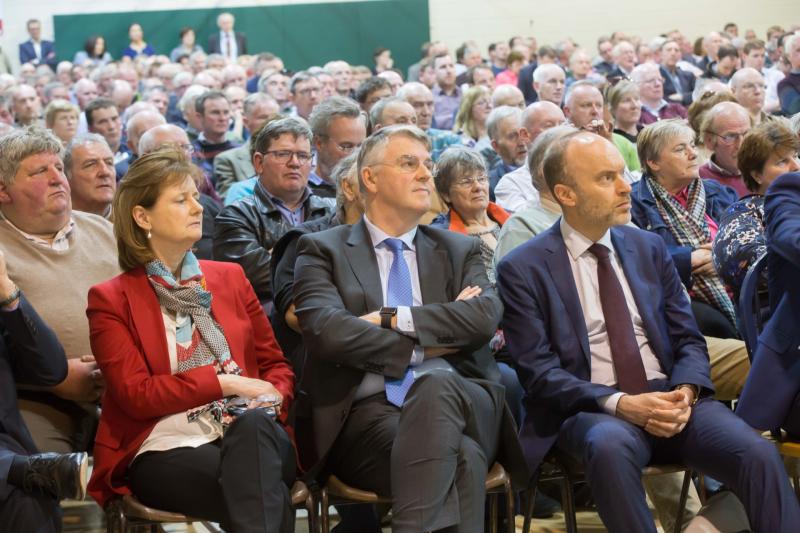 Jim Bergin, Glanbia Ireland CEO among the crowd during the IFA–EU Commission Citizens' Dialogue event on the future of CAP PICTURE: PAT MOORE

After spending the night taking questions from Kilkenny farmers about fears of a cut of between 15 and 30% in the Common Agricultural Policy (CAP) and the €12 billion hole in the EU budget after Brexit, EU Agriculture Commissioner, Phil Hogan got into his car and made his way to Dublin for a 6,30am flight on Saturday morning to Brussels, where at 9am he chaired all day negotiations.
At the end of the day, a huge beef export market for Irish farmers was opened up. And in May he will make his fourth official visit as commissioner to China bringing a number of Kilkenny companies with him.
He was enthusiastically received by the 750 people present in O’Loughlin Gaels GAA club house in the city for what was officially called: Making CAP 2020 Work for You – Citizens’ Dialogue on the Future of Europe for Farmers Open Discussion.
He gave his word that he was doing everything in his power to protect the CAP Budget.
“The CAP is a European success story, and I want that to continue into the future, but this success is built on farmers being rewarded for their work,” he said to applause.
“But I must warn you that the scale of the challenge in relation to defending the CAP is unprecedented this time around.
“The Commission is not like a national government, it cannot run a deficit, so we are bound by budgetary constraints.
“Meanwhile, Brexit is blowing a €12 billion hole in the European budget, and other priorities such as security, migration and defence have grown in prominence in recent years.
“Another €12 billion is demanded by many Member States to ensure delivery of those policies too.
“Therefore in many quarters the CAP is viewed as the obvious target for cuts.
“A Commission discussion document published in February provided budget modelling based on different options – including a 15% cut or a 30% to the CAP budget.
“I hope this gives you a clear understanding of where I am operating from, and the uphill race my team and I have been facing,” he said.
Ammonia
He pointed out that new data revealed last week by the Environmental Protection Agency (EPA), that in 2016, Irish ammonia emissions were in breach of EU limits for the first time.
“And emissions for three of the five main pollutants are going in the wrong direction.

Ireland can’t afford to pay lip service to the climate and environment any more,” he pointed out.
“We risk serious fines if we continue on our current path.
“That is why I propose a new system to help farmers of all sizes to play their part, and I want to see them rewarded for doing so.
“The basic idea is to move from a compliance-based system to a results-based system, and to give national authorities more flexibility on how to achieve results. Subsidiarity is the name of the game, we are giving Member States the opportunity to influence positive change, under the watchful eye of the European Commission.
“Each Member State will submit a CAP Strategic Plan with detailed descriptions of how they will address specific issues, such as: climate and environment, nutrient management, precision farming, and so on.
“The Commission will approve the plans, monitor their performance closely, and intervene where necessary.
“We will remain the ultimate authority and national authorities will be expected to deliver in a meaningful way, ensuring 100% of Direct Payments are linked to environmental performance,” he said.