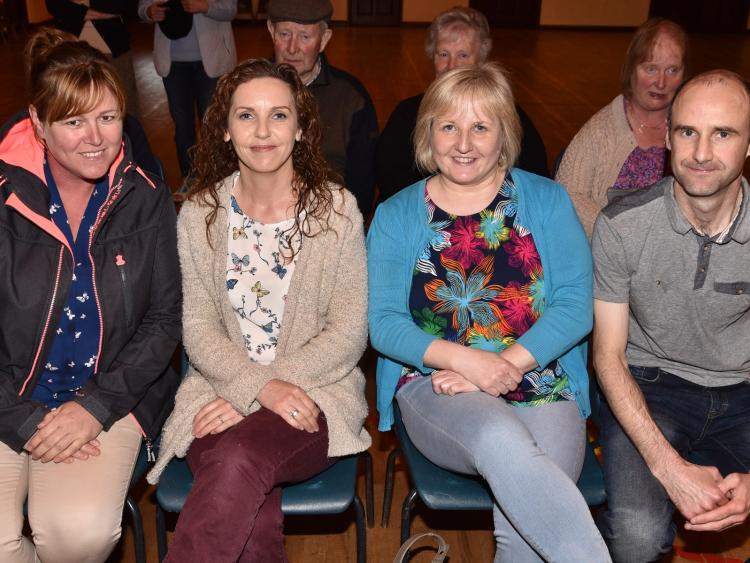 Pam Doyle was with Anne, Marie and Richie Hanrahan to protest at the An Post proposal to close the Glenmore Post Office Photo: Harry Reid

Well over 150 local people turned up in Glenmore Hall on Monday night to publicly support the retention of the local post office.
It is under threat since hardworking and dedicated post mistress, Kathleen Hanrahan, announced her intention to retire this year.
“If it closes, Glenmore would lose its heart beat,” Fine Gael councillor, Fidelis Doherty told the gathering.
She understands there is a tendering process to go through but she is worried about An Post’s intentions following the closure of the post offices in nearby Slieverue and Tullogher.
“We are the last one in the area and if it closed, we’d have to travel eight miles to New Ross, Wexford or nine miles to Ferrybank, Waterford for a stamp,” she said.
“We just want An Post to know that we are here and won't tolerate the closure of our post office,” she added.
An Post responded by saying some postmasters who wish to retire had been offered a voluntary severance package including Kathleen Hanrahan.
“There will be no compulsory closures of Post Offices as a consequence of this new deal,” a spokesman said. Postmasters have until July 31 to signal their intentions and An Post said there is no change to the status of the post office at Glenmore.
“We are aware that our postmistress in Glenmore has expressed an interest in taking up the voluntary severance package,” An Post added.
After the July 31 deadline, An Post said it will be in a position to address the situation and what will happen with Glenmore Post Office.

Kilkenny people are invited to Get Ireland Growing with free grow boxes!