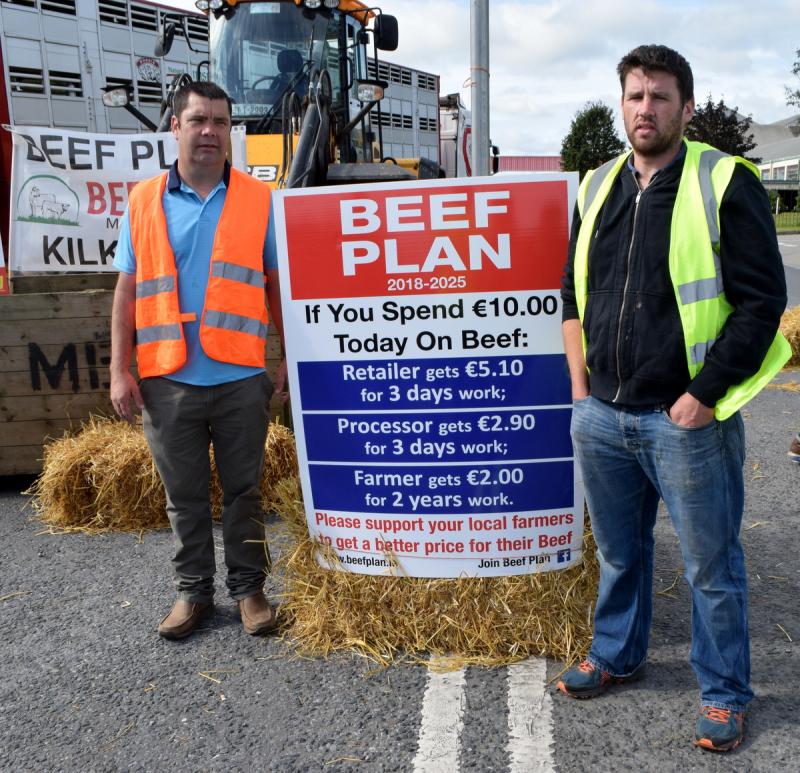 Up to 100 farmers protested outside a south Kilkenny meat processing factory, this week, as part of a nationwide campaign against low beef prices.

Lorry loads of animals bound for the plant had to queue along the N24 outside Dawn Meats in Grannagh as the tense protest resulted in no vehicles going in or out of the facility.

The protest began nine days ago, organised by the Beef Plan Movement, and has grown to include members of other farming organisations, although not officially backed by the leadership of other organisations.

Organisation leaders say farmers are very angry at the falling price they are getting for beef, but that their protest is peaceful.
Alan O’Brien is chairman of the Kilkenny branch of the Beef Plan Movement. He said farmers are just looking for the cost of production to be covered. “Farmers are going broke. Any person is entitled to a day’s work and get paid.”

Gardaí were at the Grannagh site on Tuesday.

A protest has also been taking place at the ABP plant in Ferrybank.
Suckler farmer Jack Frisby, from Mullinavat, was one of the ordinary, local farmers at the Grannagh protest.

He said that in the last two years the price he gets for an animal has fallen by €400. “We just can’t sustain this,” he said. Beef farmers were getting €4.30 per kilo last year, this year they are getting €3.20 a kilo, Mr Frisby explained.

“Factories are blaming Brexit, or the world economy but if you go into a shop you are paying as much or more for beef as this time last year.”

The Mullinavat farmer said all the farmers are looking for is a fair price to support their families. “I’m a man of 65. I’ll be 66 in January and I get the pension next year. I want to look after the people coming behind me.

“My son is a small farmer but I would not advise him to take up farming. There will be no farmers in this country in a few years, it will be back to trees again. Last week the Minister for Agriculture, Michael Creed, announced a €100 million Beef Exceptional Aid Measure, however Mr Frisby said “at the end of the day we will get very, very little. €100 million is just a drop in the ocean, we would want €100 million every week.”

If farmers don’t have an income lots of people won’t get paid, he went on. Vets, co-ops, insurance and diesel bills, nothing is coming but the price of beef. The price of beef in a supermarket is €21 a kilo, the farmer gets €2 a kilo, Mr Frisby said.
“We are losing hand over fist and we can’t sustain this any longer. We are on our knees.”

Mr Frisby, who has been committed to the protest over the last week, and says he hasn’t had 12 hours sleep in that week.
The Irish Farmers Association is not involved in this action. In a statement they said member farmers were free to make their own decisions on joining in beef protests – but farmers who need to sell livestock must be allowed to do so.

At the start of the protest the Beef Plan Movement called on farmers to support the protest so that the government, the general public and the wider agricultural industry will realise the important contribution suckler and beef farmers make to the economy of Ireland. The movement wants people to realise how much beef and suckler farmers contribute to the economy and how much everyone has to lose if such farmers go out of business.