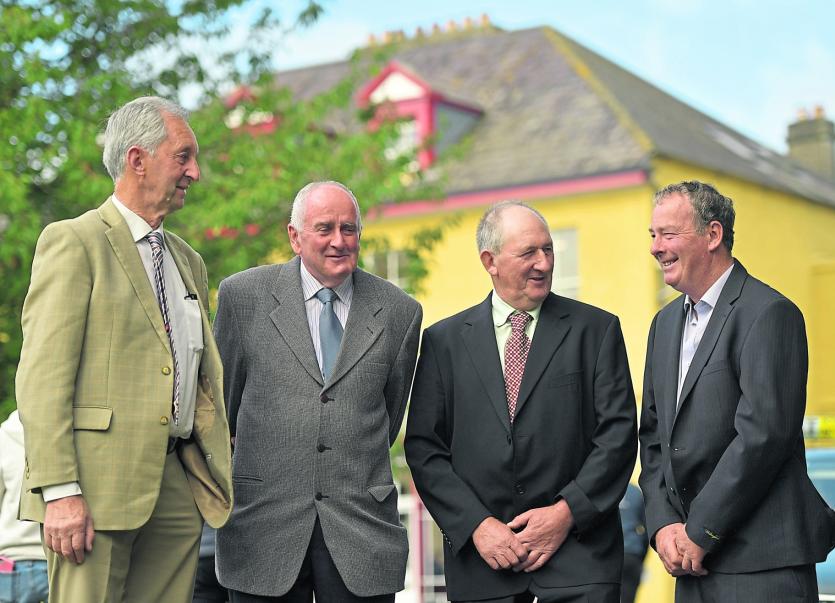 Jim Kinsella (Mooncoin), Sean Fahy (Galway), Johnny Walsh (Kilmacow) and Walter Crowley (Mooncoin) all are past or current board members of Dovea at the launch

From Landlords to Genetics, the fascinating story of the Trant Estate in Dovea, Thurles, now headquarters of the successful Dovea Genetics business, was launched last week.
Commissioned by Dovea Genetics, it tells the fascinating story of the Trant Estate in Dovea; the Trant family, who built Dovea House
Speaking at the launch Tipperary hurler, Noel McGrath said Dovea Genetics was known to everyone around Ireland.
“It is wonderful what they have done with the historic house and estate and I wish them many more years of success,” he added.
Dovea Genetics was founded in 1952 by local co-operatives as one of Ireland’s AI Stations. Today, Dovea Genetics remains a truly independent AI station with a thriving domestic and export business.
Conscious of the heritage they inherited, the board and management embarked on a major project of estate restoration and associated heritage research, culminating in the publication of the history of Dovea.
“Dovea House and demesne is a unique work environment,” said Dovea Genetics General Manager, Ger Ryan.
“Everyone who works in Dovea has a keen appreciation for the heritage of our organisation so we feel fortunate to have been able to undertake a major restoration of the house and to complete a research programme on its history.”
The book is the combined effort of a voluntary group of Tipperary scholars led by local historian George Cunningham.
“This is a beautifully presented work of significant historical record telling the story of the historical and modern Trant estate in Dovea,” he said.
“Our group worked assiduously for over two years gathering relevant material to follow the fortunes of the family before and during their tenure in Dovea, with a detailed record of the establishment and growth of the current Dovea Genetics business.”
From Landlords to Genetics tells the story of the estate from its establishment in the post Cromwellian period right up to the Trant family departure and the story of the current occupants Dovea Genetics.
The story is, in many ways, the story of the emerging Irish state but told from the perspective of one influential family.
However, it is that personal perspective that provides the nuance often missing from the more polarised accounts of modern Irish history.
The 380-page full colour hardback book has national historical value with new information and analysis on important historical events like the controversial Cormack brothers’ executions, the 19th century landlord period and the Trant family’s contribution to the emerging Irish State.
In 1944 Captain Laurence Trant attended a lecture given to farmers in the Thurles district by Dr Henry Kennedy, Chief Executive of the Irish co-op movement and subsequently offered Dovea as a demonstration farm for the betterment of the local farming community.
Dovea House and the 200 hectare farm was bought by Centenary Co-operative, Bouladuff, Thurles. Centenary’s visionary manager, Dan O’Mahoney, was instrumental in organising the Bovine Artificial Insemination Centre.
By the 1950s 52 co-operative creameries in the region became members of the newly-formed South Eastern Cattle Breeding Society in Dovea House.
Dovea Genetics was established in 1952 and has over 100 bulls standing at stud producing semen for the Irish and export market with the aim of improving genetic merit of the Irish cattle herd – both dairy and beef – by providing the best available genetics.