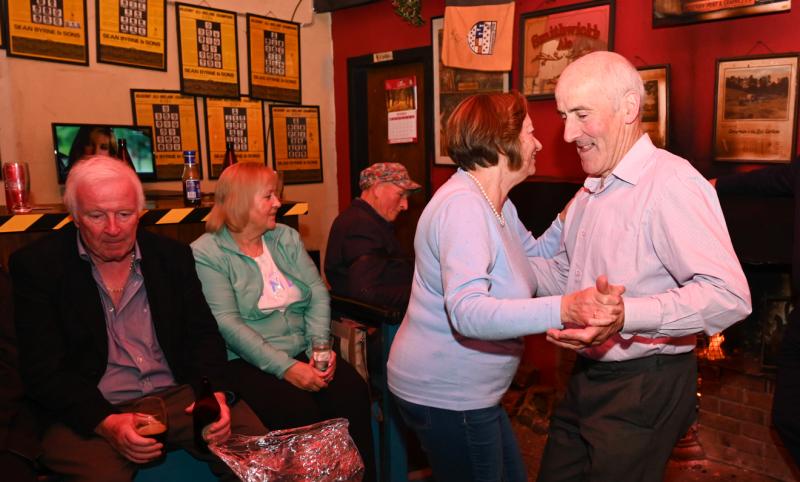 It was an unseasonably cold evening as the car neared Loon, just outside Clogh in North Kilkenny.

Peering out through the misty windscreen, the crossroads came into view in the distance.

And there it was, a sight to behold, Lacy’s Pub. 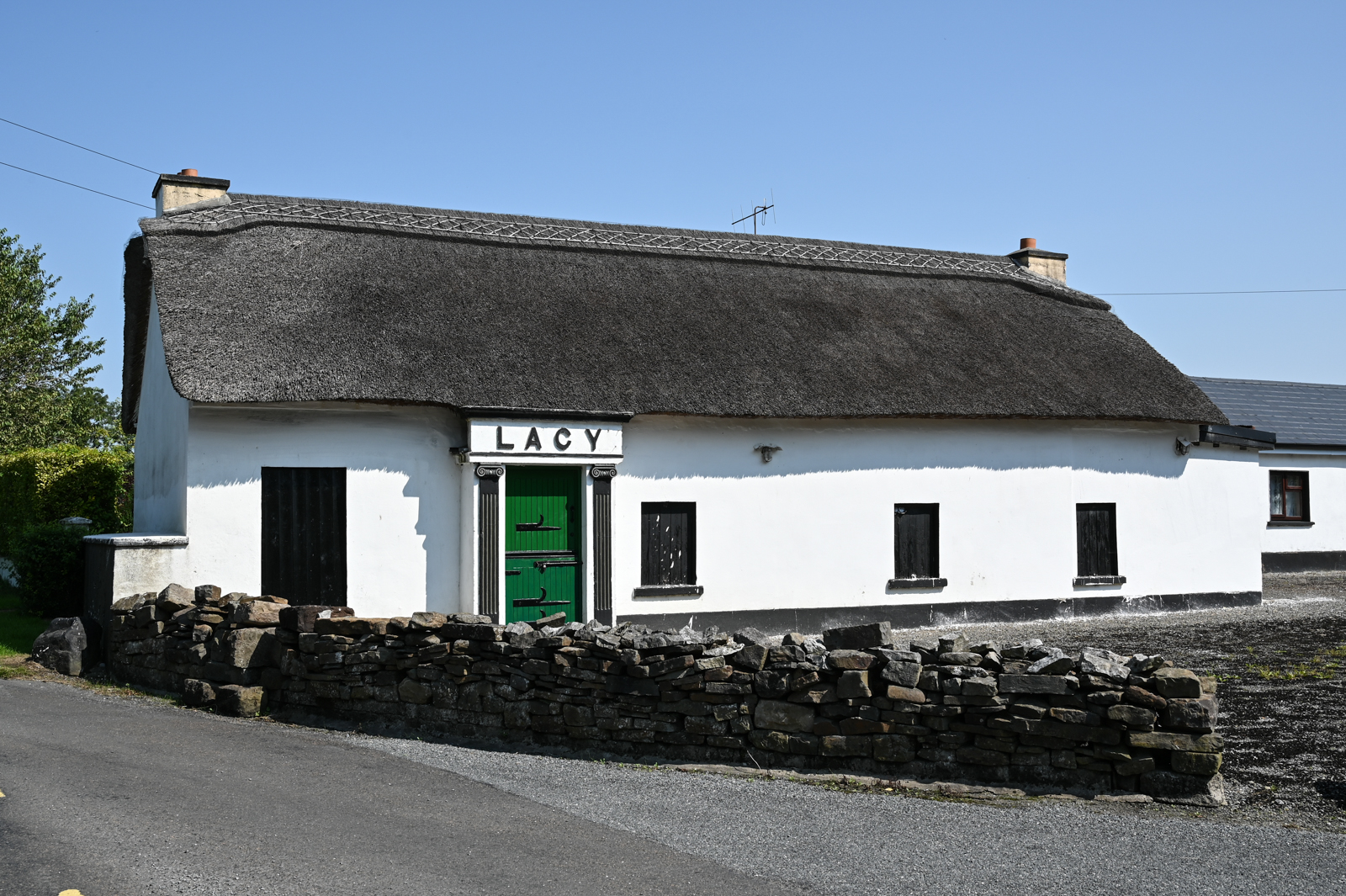 The first thing that catches your eye about Lacy’s is the thatched roof, restored only a decade ago.

It just so happened that on this particular evening there was light radiating from Lacy’s.

That welcoming glow, the signal that Lacy’s is open for business, has become a sporadic sight in recent years.

The reason the light was on during this particular evening was because the pub was playing host to a small gathering to celebrate its reopening after the pandemic.

Lacy’s owner, John Lacy, is now trying his best to open the doors at least once a week.

“There’s been good times and bad times but it’s important that we keep it going. This pub has been passed down through seven generations of our family.”

Walking through the door into the bar is like stepping back in time. The building heaves and aches with the weight of stories.

Situated in Kilkenny’s coal mining heartland, it was both fitting and moving to see an abundance of mining gear, equipment and pictures on display.

Perched along the long wall opposite the bar sat an insurmountable amount of locally produced earthenware and memorabilia.

Moving closer to the fire at the end of the room, blackened smoke-damaged posters of the great Kilkenny hurling teams of decades-past rest with pride of place.

Above that fireplace is a picture of a local man who was untimely executed by the Black and Tans. He stands resolutely as a bayoneted rifle from the revolutionary era hangs trophy-like on the adjoining wall.

One of the pub regulars is Willie-Joe Mealy, a well-known local man who carries with him immense spirit and generosity.

For Willie-Joe, the social outlet that the pub provides is incredibly important to him.

He could spend hours upon hours entertaining pub patrons with tunes on his squeezebox, getting up only now and then to cook toasties over the fire for anyone feeling hungry. 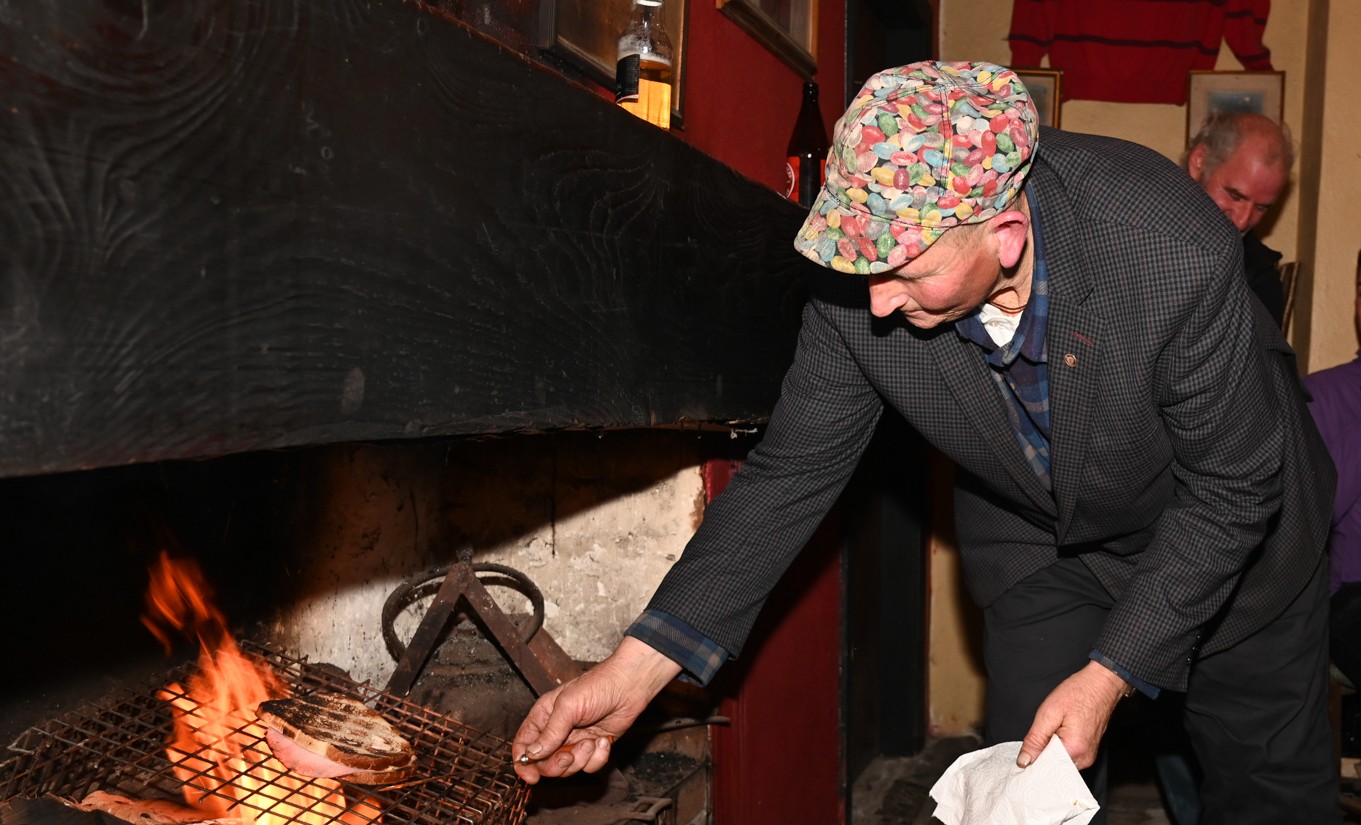 Speaking to Willie-Joe, he fondly recalls the days of the horse and bogey, the journey from field to haggard, the ringing sound of cog and iron and faded cocks of hay.

Lacy’s provides a space for these conversations to be summoned and old times are treasured and regularly recalled among locals in great detail here.

Another Lacy’s regular is Jackie Conway. He too recognises the important role that the pub plays in the community.

“It’s important to have a space in the community where you can meet up with people and just have a chat,” he told the Kilkenny People.

John Ryan, a local historian who got up from his seat to recite some poetry and ballads when called upon by Willie-Joe Mealy, agrees wholeheartedly.

“You can see the history in the building here and what it means to local people. Lacy’s provides people with a connection to their past, their community’s past, to tradition, to the very things that make up their being,” he said.

John then handed me a copy of an eviction notice issued to the Lacy family in 1878 that he had in his possession.

The notice served to highlight the scale of the challenges faced by the family throughout the generations to keep the pub open.

Even in living memory, the pub has seen social history unfurl, develop and pass by before it.

Local miners and farmers have left their own mark over the years, as noted by Lacy’s regular Caleb Kelly.

“You used to be able to tell how many people were inside the pub by how many bicycles were parked up outside. There used to be rows and rows at times,” he said.

“Kids learned how to cycle a bike by taking them from outside the pub and going up and down the road. There was never any fear of anything being robbed.”

Caleb then described how the pub became such an important destination in the daily routine of local miners.

“As you can imagine, health and safety wouldn’t have been up to the same standard back then as it is now and a lot of miners used to breathe in the coal dust while down the shafts,” he said.

“After a full day’s work they’d come down here to Lacy’s to wash down the coal dust and flush out their systems.”

Lacy’s used to be a brilliant place to throw a function too, Caleb recalls.

“There’s a lot of local people around Clogh and ‘Comer that would have their own personal memories housed here too,” he added.

Nowadays, isolated rural pubs such as Lacy’s are slowly but surely vanishing across the length and breadth of our county and country.

With each closure, a storied chapter in the history of a community’s social heritage and history is ended.

We cannot afford to continue to lose these living cultural artifacts, a fact echoed in speeches from local councillors made on the night of Lacy’s reopening.

To lose ‘the local’ is a mark of regression, not progression. Wishing many more years of success to Lacy’s of Loon!