Barracks Handover Centenary: The 1922 account of the handover from the Kilkenny People

The following is the account of the handover of the military barracks in Kilkenny from British Forces to Irish Forces as reported in the Kilkenny People on February 11, 1922:

On Tuesday last the Kilkenny military barracks were formally handed over to representatives of the Irish Provisional Government.

The historic event was marked by striking demonstrations of public rejoicing, and all classes of the citizens gave undeniable evidence of the satisfaction and pleasure occasioned by the evacuation of the barracks by the British garrison and subsequent occupation of the premises by a number of picked men of the Kilkenny Brigade IRA.

The present week witnessed a wonderful transformation in the national life of the City of the Confederation.

The process of evacuation of the military barracks by British troops began last week, and on Monday morning from an early hour special trains left Kilkenny conveying the 11th and 146th Batteries RFA, the total strength of these forces being represented as 216 officers and men.

They brought with them horses, guns ammunition, etc , including six 18-pounder guns and six 4.5 howitzers.

They left Dublin the same day en route for their new quarters at Catterick, England. Detachments of the Devons and Oxford and Bucks, the last of the garrison, left on Tuesday by the 12.30 train to Waterford.

The Wearin’ of the Green
Negotiations proceeded immediately afterwards on the part of the Irish Provisional Government for the taking over of the military barracks for the accommodation of troops of our national army, and early on Tuesday afternoon all arrangements were complete. The surrender of the barracks was purely formal.

Captain Fulham, representing the Provisional Government, attended at the barracks and received formal possession, which he subsequently handed over to Brigade Commandant George O’Dwyer, IRA.

At about 2 o’clock on Tuesday a large body of men, representing the Kilkenny Brigade IRA, mobilised at St James Park and, having got into military formation, a triumphal march took place through the streets of the city to the military barracks. 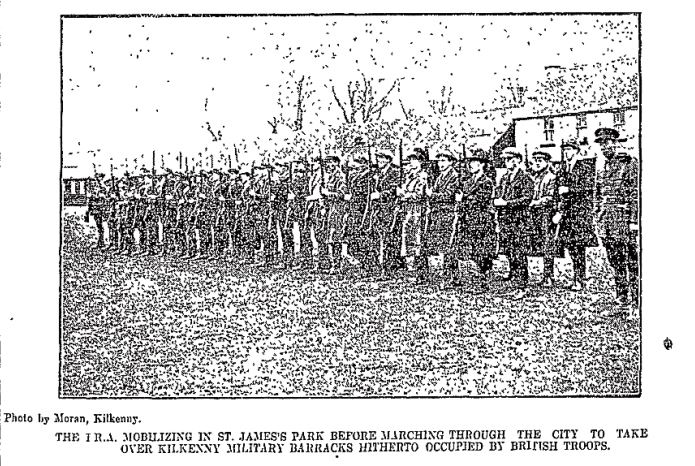 The sidewalks along the route of the procession were thronged with people from city and county, many of whom waved flags, and vociferous cheers were raised for the young soldiers marching past. The procession was headed by St Patrick's Brass Band, who played national airs along the route.

About 42 men, drawn from the various battalions of the Kilkenny Brigade, under the command of Commdt George O’Dwyer and armed with rifles and bayonets, marched after the band, and a large body of the Kilkenny Battalion IRA also took part.

Long before the arrival of the troops large numbers assembled at the military barracks to witness the triumphal entry. Many houses in Barrack street and the neighbourhood exhibited Sinn Fein colours in honour of the unique occasion.

To the accompaniment of martial music the barrack gates were flung open by the guard placed in charge earlier in the day, and the entrance of the first contingent of the Irish national army was the signal for a tremendous outburst of cheering from the vast gathering assembled outside the barracks.

After the entrance of the troops the general public were admitted, and the spectacle as the troops marched through the barrack square was one that will be remembered with pride by all who had the pleasure of witnessing it.

The splendid military bearing of our young soldiers was warmly commented on by many of those present, who included the Mayor of Kilkenny (Ald Peter De Loughry), Captain Delaney, Liaison Officer, and a number of members of the Corporation, as well as Mr Sean Gibbons, chairman, and several representatives of the Kilkenny Co Council and other bodies in the county and a number of the clergy.

Having undergone some military evolutions, the troops (with the exception of a small party detailed to occupy the barracks), were dismissed and the barracks cleared.

For the present, and until final arrangements are completed, the garrison will be under the command of Vice-Commandant Brennan, 9th Batt Kilkenny Brigade.