Ronan Doheny tells of how he made a remarkable discovery while conducting an inventory on the sacristry at St Mary’s Cathedral, uncovering a connection to Galmoy and the marriage of Julia Molloy to an Austrian Count at the turn of the last century 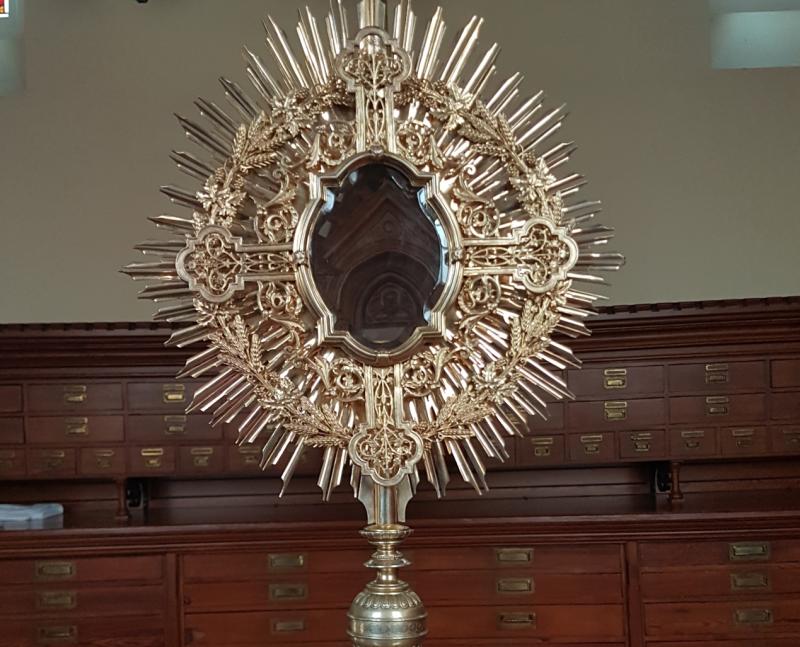 Recently I volunteered my skills as an archivist in my parish of St Mary’s Cathedral, conducting an inventory of the items in the sacristy.
One of the items I found was a very special gold monstrance; used for Eucharistic Adoration which is also called Benediction. The monstrance first interested me because it was Viennese, from the early 1900s and made by the same jewellers to Emperor Franz-Joseph of the Austro-Hungarian Empire.
It puzzled me how a Viennese monstrance could have ended up in the sacristy of the Cathedral. However, my amazement was only starting. Fr Richard Scriven of St Mary’s produced a pamphlet about the history of the Cathedral written in the 1970s by a local historian Margaret Phelan.
In the pamphlet she explained some of the mystery. The monstrance was donated by the Irish wife of the Austrian Count von Musal-Mollenbruck. The Countess’ maiden name was Julia Molloy and hailed from Kilkenny.
However, I was stunned when I discovered where in Kilkenny - Galmoy! My grandparents lived in Galmoy, John and Sheila Harte. Having visited Galmoy often growing up, I was flabbergasted to learn that the tiny village produced a Countess!
Margaret Phelan’s pamphlet led me to the records of the Kilkenny People. On 17 June 1911 the Kilkenny People reported that on June 11 the administrator of St Mary’s Cathedral Rev James Doyle made a special announcement at the 11 o’clock mass of a special donation from the Austrian Countess von Musal-Mollenbruck.
The donation included: a gold monstrance, gold chalice, gold ciborium, a set of lace altar cloths, a woven carpet for the sanctuary, a sculpted white marble bust of Jesus and an oil painted copy of Raphael’s Madonna bought in Florence by the Countess.
Fr Doyle thanked the Count and Countess for their generous gifts and asked for the congregation to keep them in their prayers. He invited the congregation to view the gifts at the end of mass on display on the side altar to Our Lady in the Cathedral. So far of all the donated items the only one to be located is the monstrance.
While the article cleared up some questions, it led to more by saying that Julia had married the Count in St Mary’s Cathedral ‘six or seven years ago’.
Information about Julia Molloy is difficult to find. Her name is not on any census forms and proved elusive on baptismal records for Galmoy.
In the early 1900s there were two related Molloy families in Galmoy; one in the townland of Cooloultha and the other in Moneynamuck. Julia’s brother was William ‘Bill’ Molloy. In the 1930s, the Irish Folklore Commission created an oral history of the country, when they visited Galmoy, the story of Bill Molloy was recorded.
Songs and Poetry
He was remembered as a postman who wrote songs and poetry, which were still sung in the village 20 years after he had emigrated. The account titled ‘Local Poets’ from 1938 records that his sister was an Austrian Countess.
However, there is also little information about ‘Bill’ Molloy as he left the village for ‘some foreign country’. Given that it records Molloy as leaving Galmoy around 1908, it is likely he received monetary assistance from his wealthy sister.
The Kilkenny People article recording Julia Molloy’s marriage stated that her cousin Katie acted as bridesmaid, meaning that it is almost certain Julia was one of the Cooloutha Molloys; making her parents Timothy and Hanora Molloy.
Timothy passed away in the early 1900s resulting in her uncle giving the bride away at the wedding. It is likely Julia emigrated to the United States in the late 1880s or early 1890s.
Given the age of her cousin Katie and reviewing records from Ellis Island it is possible Julia arrived in the United States in 1891 on the City of Chester ship aged 13, most likely being sent to a relative already in the United States.
The Kilkenny People, when covering the marriage, described Galmoy as ‘a historic barony whose brave sons and fair daughters are fit to rank with the proudest chivalry of Europe, whose battle-fields, indeed, “from Dunkirk to Belgrade” were, in the days of the Irish Brigade, dyed with the blood of many of the “Wild Geese” from the fertile plains of Galmoy’.
At the time of the donation the couple resided in the town of Baden outside Vienna but their romance began in California. After arriving in America, Julia ended up in a ‘public department’ in a large city in California where she encountered the Count.
It is a mystery how the Austrian nobleman ended up in the United States but he may have been in the diplomatic corps or part of a trade delegation for the Austro-Hungarian Empire.
Whatever way they met, a romance quickly developed between the Count and the ‘colleen’ from Galmoy. In about 1902 they were engaged with his family offering no objections to him marrying a non-royal, called a ‘morganatic marriage’, or the request that the marriage take place near the home of the bride.
It should be noted that at this stage in the Austro-Hungarian Empire it was not unheard for royalty marrying non-royals. Famously, the heir to the throne Archduke Franz Ferdinand caused scandal in the Austrian Habsburg court in 1900 by marrying his true love Sophie, a minor royal, much to the annoyance of his family. However, in the case of von Musal-Mollenbruck his family seemed happy with the marriage. 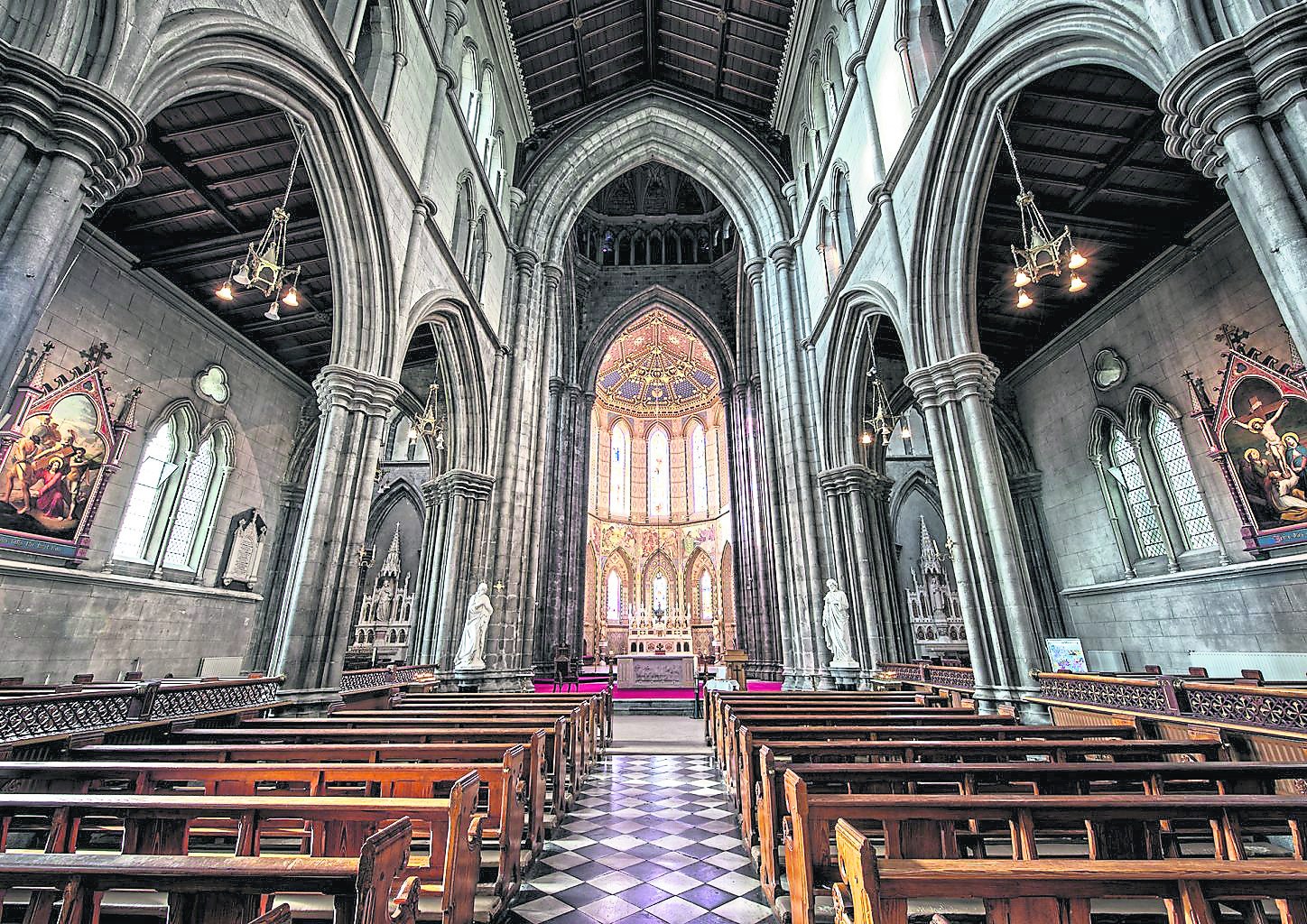 Although the Count’s parents were not able to attend the wedding, the Kilkenny People stated that ‘a splendid residence, on the shores of the Mediterranean, has been placed at the disposal of the happy couple’.
It went on to report that the ‘presents in jewellery which the bride has received are supposed to represent an amount which can only be reckoned in thousands’.
The Kilkenny People reported on the marriage which took place on December 6, 1904 in the Cathedral whose sanctuary ‘presented a bright appearance due to a wealth of floral decoration.’ As the marriage took place during Advent, a nuptial mass could not be celebrated so the ceremony took place before 8am mass.
The glamourous wedding attracted a large crowd to the Cathedral eager to see the romantic couple and later joined them to witness the ceremony.
As the Count entered the Cathedral the Austrian national anthem was played by the longtime Cathedral organist Miss Donegan. Donegan played a number of selections for the ceremony including Schubert’s Andanta Con Moto.
The ceremony was performed by Rev Patrick Treacy, Adm of St John’s, with Rev James Doyle, Adm of St Mary’s. Rev J Heneberry, Chaplain of Kilkenny Workhouse, acted as best man ‘in the unavoidable absence of Master Molloy, a cousin of the bride’.
Oddly there is no mention of Bill Molloy, which could suggest that he had already emigrated from Ireland.
Julia was ‘plainly but tastefully attired’ with her cousin Katie Molloy acting as bridesmaid. Julia was given away by her uncle, possibly the patriarch of the Moneynamuck Molloys: John Molloy.
As the bridal party left the Cathedral, Miss Donegan played Mendelssohn’s Wedding March. After the ceremony, the newly married couple remained for the celebration of mass.
After mass, the wedding party travelled to the Imperial Hotel on the Parade, where now stands KBC Bank, for a ‘sumptuous wedding breakfast…amid surroundings which lost nothing in point of artistic elegance and taste’.
That evening, the Count and Countess left on the Dublin mail train on their way to a honeymoon in Europe before returning to America.
Lavish DOnation
Seven years later, after spending many years in California, Countess Julia made her lavish donation to the Cathedral.
As the Kilkenny People wrote this ‘noble Irish lady, although well-endowed with the world’s goods and living in affluent circumstances, never forgot the country from which, she sprang or the Church of which she was a faithful member.’
Sadly, the rest of the story is a mystery as there is no information about what happened to the happy couple. However, this enjoyable research proves that there are gems waiting to be discovered in archives across the country and that above all, that Ireland is a village as small as Galmoy!