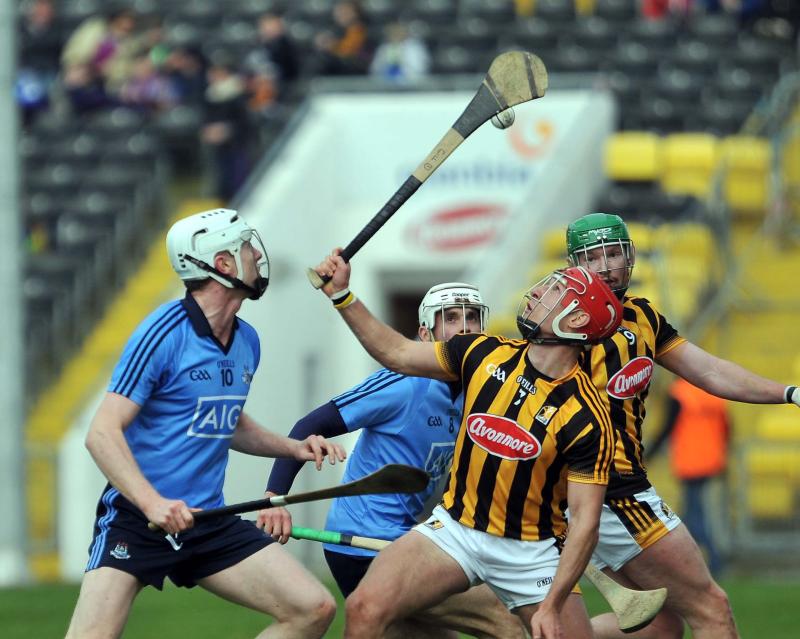 You just couldn’t get enough of high octane games like Kilkenny and Tipperary threw up in heaving Semple Stadium last weekend.
That was the verdict on reflection from Kilkenny’s ‘Action Man’ Cillian Buckley, who was the star player as the Cats claimed an unexpected draw with unbeaten All-Ireland champions, Tipperary.
The Dicksboro man claimed a healthy three points from play as he continued to make his mark in a new role in midfield having been moved from defence where he starred for a couple of seasons.
“You couldn’t get enough of games and action like that,” the fleet-footed 24-year-old insisted afterwards. “It was great. I really enjoyed the game.
Terrific game
“I would imagine everyone in Semple Stadium did as well. It was a terrific game to be part of as the two teams gave everything they had in pursuit of victory.”
Buckley, who joined the squad in 2012, insisted the match was seriously competitive.
During the first half Tipp hit the opposition for a few early goals to go well ahead, and Kilkenny needed a response.
“We got a response almost straight away by shooting three points and we went in within touching distance of them at half-time,” he recalled.
The home side led at the break by 2-11 to 2-7.
“Everyone drove on hard to get back from the start of the second half,” Cillian explained.
“I suppose a draw was a fair result. Avoiding defeat was good for both sides.”
When asked, Buckley said Kilkenny’s performance was a long way ahead of the hollow one they put in against Clare about a month ago.
“In Clare the opposite happened,” he recalled. “We went in at half-time and the game was there to win, but Clare hurled us off the field in the second half.
Didn’t perform
“We have to hold our hands up and admit we didn’t perform that day.
“We picked things up a fair bit the last day against Cork, but we needed to lift it again this weekend facing a team in form and unbeaten during last year’s championship and the League to date.
“We are getting there. There is still loads of work to do. We are going about our work seriously. It is important to make the cut in the League.
“The point won here could be vital. It could keep us in competitive games for an extra couple of weeks at an important time in the season.”
Huge lift
He admitted a strong performance like Kilkenny produced was a huge lift for everyone.
“We were all on a bit of a downer after the Clare match,” he revealed. “The fightback started last week, and we continued it this week.
“It is great to be part of all of this. To be on the field involved in game like this is just wonderful.
“You actually miss the action during the Winter.
“If we are to achieve anything this year, we have to get up to the level Tipperary are at because they are the team of the moment,” he felt.
Lived on edge
“We nearly handed it back to them at the finish. We lived on the edge, but so did Tipp. We were all out on our feet, giving the last ounce that was in us until the final whistle sounded. It was hard, but nice.
“Both sides could have won or lost,” he felt. “It would have been pretty sore coming off the pitch had we lost in the end, but I think a draw was a fair outcome.”