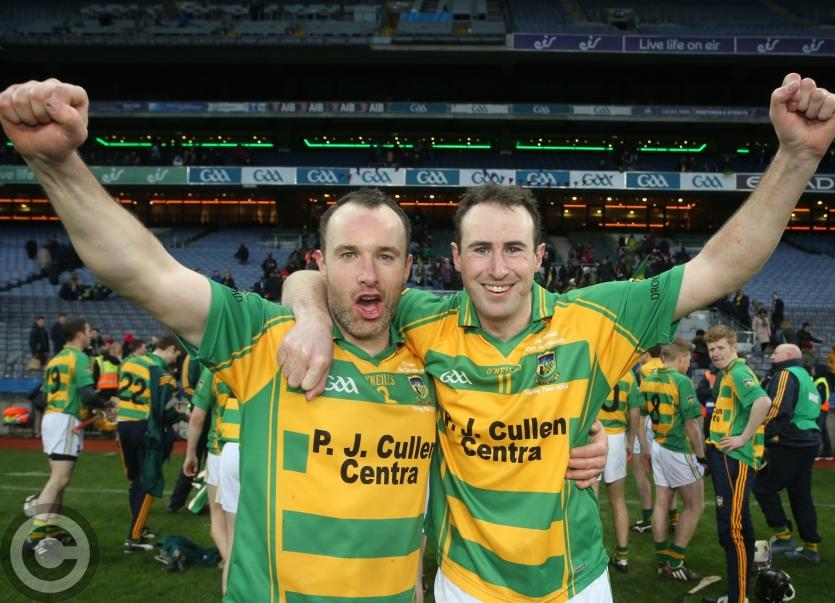 As ever there is a flurry of activity as a new hurling season gets ready to swing into action. Optimism abounds. There is anticipation in the air.
Clubs set lofty goals, often more in hope than confidence, but come Sunday night the bluff of some might already be called. Such is the way of sport... the ups and down, the ins and outs, the comings and goings.
Bennettsbridge, once a powerhouse of the local game and currently on an upward trajectory again, have bid adieu to one of their great servants of the past decade or so. The case of James Moran is interesting for a number of reasons.
Moran arrived in Kilkenny via South Tipperary outfit Ballylooby Castlegrace where the height of his achievement was divisional honours with a small club battling against a shortage of numbers.
His first port of call in Kilkenny was the James Stephens club, but after a season there, and when affairs of the heart called, he ended up in Bennettsbridge.
“For a number of reasons, including family and sport, it was a great move,” he said when confirming he had hung up his boots and camán and would not be in the colours when Bennettsbridge open in the senior championship against James Stephens on Sunday.
Moran is 36 this year, and with work and travel as an engineer severely restricting the time he can put into training, not to mention study for a Masters in engineering also curtailing his free time, he has decided to opt out.
A decent, honest-to-God hurler you might say. Fearless, too. Tough when the occasion demanded. He expressed absolute pride at the honour of wearing the colours of a great club.
Moran enjoyed casually meeting in the village or surrounding area giants of yesteryear who donned the jersey before him. He freely admitted he achieved beyond his wildest dreams in his adopted club.
He helped the ’Bridge win two county championships (junior and intermediate) back-to-back; two Leinster championships and two All-Ireland titles in the same grades.
The zenith for him was reached in the 2015 season when his honours, personal and club, amounted to seven:
He won: 1 - county intermediate hurling league; 2 - county intermediate hurling championship; 3 - Leinster club championship; 4 - All-Ireland club championship; 5 - All-Ireland inter-firms junior hurling championship with Suir Electric; 6 - Bennettsbridge player of the match in the Leinster final (judged by no lesser luminaries than Jim Treacy and Johnny McGovern); 7 - Bennettsbridge Hurler of the Year (shared with Enda Cleere) and chosen by team manager, Christy Walsh.
“That was fantastic, brilliant,” James offered when reminded of the glory run.
“They were the best two years of my sporting life when we went on that run. I never expected a journey like that. It was some achievement for the club.”
He said it was almost mad the way one match, one season ran into another. The squad played and trained through two Winters. All the hurling and fitness work helped him hugely on his personal journey.
Great atmosphere
“I couldn’t have been fitter,” he insisted when he looked back on those times. “There was a great atmosphere around the place. It was never a chore to train. You rushed to get down to the field every night for training. Even Christmas didn’t bother us.”
He admitted it was tough to take his leave at a time when things were going so well in the club. The ‘boys’ (Liam Blanchfield and Jason Cleere) were in with Kilkenny, which was good for the club, and there were plenty of good young hurlers coming along, he said.
“The future is bright for the ’Bridge,” he assured. “My time is up, however. The day I joined the ’Bridge was a lucky one. There were no greater men to be with when the going got tough.
“I will definitely miss it. I have no complaints, because I got more than I ever expected out of the game,” he said when he signed off.
Meanwhile, Carrickshock, the current intermediate club All-Ireland champions, have basked in the feel-good factor since their Croke Park success in February. However, if ever an outfit was acclaimed to be the ‘King of Hearts’ then the ’Shock deserve the accolade.
There is genuine decency at the core of the South Kilkenny outfit.
The day they won the All-Ireland, team captain John Tennyson, invited their two ‘Water Boys’, Jim Rohan and Gary Comerford, to be the first to lift the trophy in front of approving GAA President Aogán Ó Ferghail on the steps of the Hogan Stand.
Medals
Well, the club followed up by presenting the two club loyalists, Jim and Gary, with All-Ireland medals. At the medal presentation the pair were called to the stage to receive their medals before anyone else. 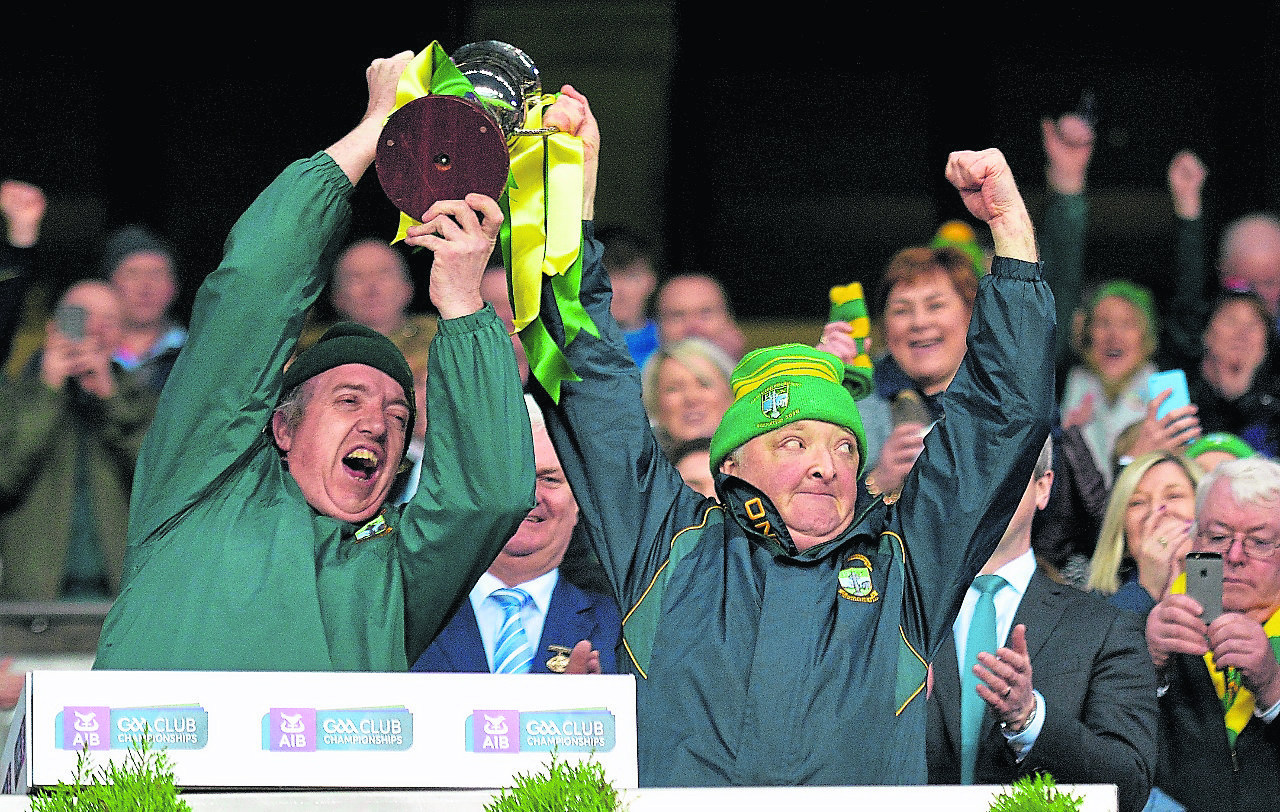 MEDALS FOR MIGHTY MEN - Carrickshock’s loyal duo Gary Comerford and Jim Rohan were presented with All-Ireland medals by the club when they held a special presentation night for their All-Ireland hurling champions.

Was the gesture appreciated by the two lads? Was it what!
Meanwhile, all is at the ready for the big throw-in for the start of the senior, intermediate and junior hurling leagues this weekend.
Clubs are at various stages of readiness, so we will take a stab, only a stab mind you, as to how things might unfold.
Friday
Clara v Danesfort in Bennettsbridge - Clara, the double champions in 2015, have a new manager in former O’Loughlin’s chief, Barry Power, and he has a useful squad with lashings of experience to work with.
They are simply not going to fade away after being contenders in different divisions for the past four seasons. The loss of county man, Conor O’Shea with a hamstring injury will be huge, but they will still pack a fair punch.
Chris Bolger can be the one to make things happen for them, if given too much room.
Danesfort have been edging forward ever so slowly in recent years, with Richie Hogan, Paul Murphy, Paddy Hogan and so on leading the charge. They should be ready now to take the next step, if they are ever to do it.
Hard to know how they are fixed right now.
Verdict - Clara
Saturday
Erin’s Own v Mullinavat in Danesfort - This could be a big one for both, because when they look around for potential match winning opportunities, they would probably finger each other.
Consequently, the winners can take a confident step forward.
Erin’s Own made decent progress last season, with Conor Fogarty their main man at the back, and Sean Buggy the one who made most things happen up front.
There was decent fight in the team, and that quality will be tested against Southerners who can scrap when required.
Attacker John Walsh, who we are hearing great things about of late, could be the one to make the difference for Mullinavat.
Verdict - Mullinavat
Carrickshock v Rower-Inistioge in Thomastown - The ’Shock are still on a huge confidence high after winning the All-Ireland intermediate club championship.
They dropped out of the senior grade for one season, which really gave them a good opportunity to regroup.
They did exactly that, and with some force under the strong leadership of manager Tommy Shefflin.
The run to the All-Ireland gave management a powerful chance to learn everything they wanted to know about their squad, and with the addition of Wexford player, Éanna Martin since, they are even better off now.
As winners themselves in the past, the Rower know the benefits a run to an All-Ireland club final can bring. They have been warned. They will be ready.
Verdict - Carrickshock
Sunday
O’Loughlin Gaels v St Martin’s (Muckalee) in Canon Kearns Park - The championship kings, O’Loughlin’s against the beaten league finalists of 2016, St Martin’s makes for an inviting start to the Sunday afternoon viewing.
The Gaels, with Martin Comerford enjoying an Indian Summer in his distinguished career, beat all before them early on in the campaign last year, but then lost their way when one win away from getting into the league final before anyone.
Hit The Jackpot
They missed out in the league, but they hit the jackpot in the championship.
The subsequent journey in Leinster suggested they needed remedial work on their defence. Still, they will take beating on the home front.
St Martin’s regained ground last season after losing their way in 2015. Can they build on that is the question? If they can beat O’Loughlin’s, the answer has to be a definite yes. Let’s see!
Verdict - O’Loughlin’s
Bennettsbridge v James Stephens in Clara - This pair clashed at the same stage 12 months ago and ’Stephens got a right old fright, although they won by 3-13 (23) to 1-19 (22).
The Village were running away with the game early on. Then the ’Bridge, the intermediate champs at the time, found their way and they roared back.
Neither made a great impression in the championship afterwards. In terms of both it is a ‘wait and see’ situation regarding the season.
The Village, with Jackie Tyrrell and Eoin Larkin big contributors, should shade it.
Verdict - James Stephens
Dicksboro v Ballyhale Shamrocks in John Lockes Park - When Shamrocks won the league final last season the general feeling was that they would roll on and complete the double. They were going well at the time.
For some unknown reason they appeared to lose a bit of drive and they never attained the same level of performance in the championship. With Michael Fennelly sidelined, it is hard to know what to make of them.
There is still something there, but is it enough for them to remain one of the big players? Time will tell.
Dicksboro have a new management team headed by Mark Dowling.
The club has been knocking firmly on the door at under-21 level in recent years, but the progress doesn’t continue up the line for some reason.
Who knows, a win here could make all the difference, but it will be hard to get.
Verdict - Shamrocks