In the mood 'Stephens give 'Bridge the blues 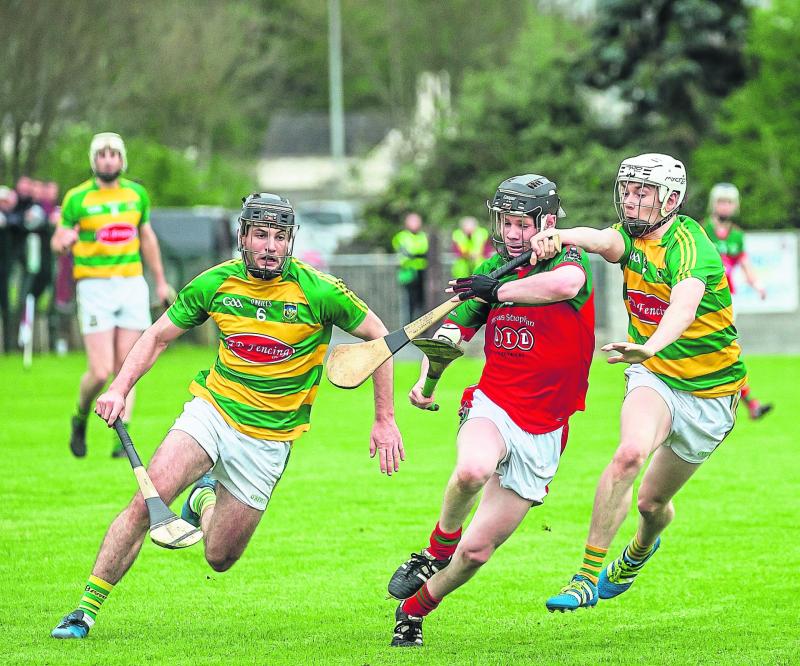 Busy, busy James Stephens captured the mood of the opening day perfectly and they worked their socks off when scoring an impressive win over Bennettsbridge in the senior hurling league.
This game in Clara on Sunday was turned on its head during a crucial five minute spell late in the first half.
Bennettsbridge, who had been led earlier, looked like taking a hold on the game when top scorer, Nicky Cleere, landed his firth and sixth points to edged them 0-7 to 0-5 in front in the 20th minute.
However, The Village snapped back. They shot 1-4 without replay between the 20th and 25th minutes to take control, and they never relaxed their grip afterwards.
“This was the start of the season and we were up for it,” insisted ’Stephens selector, Seamus Dwyer. “The players worked really hard from start to finish, and all over the field. That made the difference.
Early on Ray Coady, with an assist from Jack McGrath, and Nicky Cleere traded points as the tone was set for a largely even first half. With both centre-backs, Jackie Tyrrell (JS) and James Cleere (B) hurling really well, Tyrrell spraying good ball all over the place to the forwards, the quality of the play was good.
’Stephens tried to gain the early initiative when a great move involving Tadgh O’Dwyer and McGrath, and then O’Dwyer again, ended with a lovely point for the latter before Matt Ruth registered to edge them 0-3 to 0-1 clear.
After Nicky Cleere converted three long frees from inside his own half during the next 10 minutes, the losers got in front. When Cleere added his sixth, Bennettsbridge led by 0-7 to 0-5.
All of a sudden big things began to happen for ’Stephens. Matt Ruth snapped up a point. David Walton converted a free from over 80 metres to level it at 0-7 each.
Eoin Larkin then stole possession before shooting a point, and when he added a second with minutes there was no holding them. Right on the 25th minute Tyrrell cleaned up a ball in the No. 6 position, and fed David Hennessy on the left.
The latter’s smartly hit clearance up the wing was won by Tadgh O’Dywer, who still had a bit of work to do before planting the ball in the net (1-9 to 0-7).
We weren’t to know it at the time, but that sharp blast which took ’Stephens into an interval lead of 1-11 to 0-8 was crucial to the outcome.
The ’Bridge, who had been in a somewhat similar position when the sides clashed in the first round last year, came out breathing fire in the new half. They registered early through Cleere following a foul on Sean Morrissey.
When Liam Blanchfield fired a shot at the target, which missed, the intent in their play looked promising.
’Stephens kept playing away, working hard and chasing down the opposition at every point of the field and it wasn’t long before they had a stranglehold on affairs. A high tackle on Ruth gifted David Walton a handy point from a free.
Moments later Luke Scanlon snapped up a ball on the 35 metre line before splitting the posts.
The run was interrupted when Nicky Cleere converted another free, but the hard running winners hit back at the double through Ray Cody and the very lively Brian Crowdle to lead by a comfortable 1-15 to 0-10 heading past the 42 minute mark.
The ’Bridge were in big trouble from here on.
Well drilled ’Stephens threw the ball around well and used the hand-pass intelligently. They kept up a serious momentum, driven on by Tyrrell, his former county colleague Eoin Larkin, David Hennessy, John Comerford, Brian Crowdle, Matt Ruth, Luke Scanlon and Ray Cody.
SCORERS: James Stephens - David Walton (0-6, five frees); Tadgh O’Dwyer (1-2); Brian Crowdle (0-4); Matt Ruth (0-3); Eoin Larkin, Ray Coady, Shane O’Donoghue (0-2 each); Luke Scanlon (0-1). Bennettsbridge - Nicky Cleere (0-10, seven frees); Enda Cleere (0-1, free); Kevin Blanchfield, Brian Lennon, Dylan Walsh, William Murphy (0-1 each).
James Stephens - Gavin Costigan; John Comerford, Tomás Kehoe, Luke Hickey; Niall McQuillan, Jackie Tyrrell, David Hennessy; Ray Coady, Luke Scanlon; Jack McGrath, Eoin Larkin, Tadgh O’Dwyer; David Walton, Matthew Ruth, Brian Crowdle. Subs - Shane O’Donoghue, Conor McQuillan.
Bennettsbridge - Enda Cleere; Paul O’Neill, Robert Lennon, Cormac Wafer; Enda Morrissey, Jason Cleere, Aidan Cleere; Sean Morrissey, Kevin Blanchfield; Brian Lennon, Nicky Cleere, Michael Shiel; Kevin Brennan, Liam Blanchfield, Dylan Walsh. Subs - William Murphy, Patrick O’Neill.