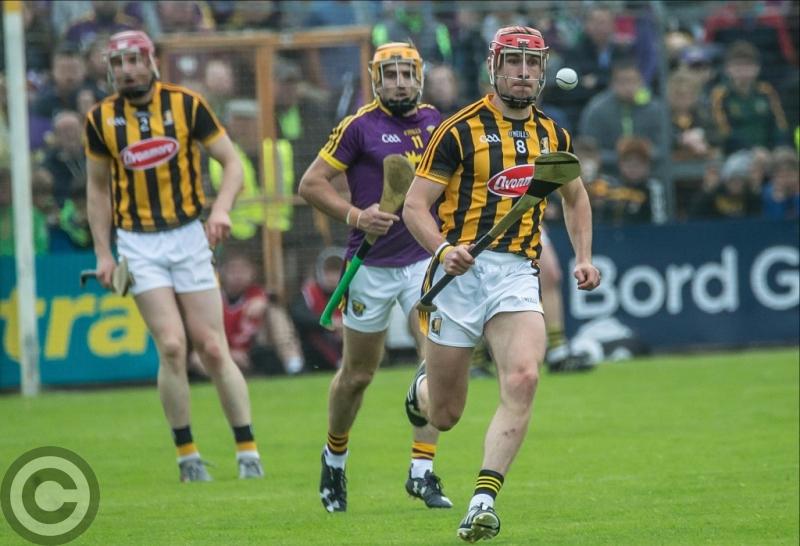 Many of the Kilkenny players were disappointed by their performances against Wexford. Expect hurlers like Cillian Buckley to drive things on against Limerick in Saturday’s Qualifier PICTURE: PAT MOORE

My first thought on hearing Kilkenny had been paired with Limerick was ‘yeah, that’s doable, we should be able for that’. But that’s the rock you perish on.
Limerick aren’t a team we meet regularly, but it takes a lot of work to get over them.
The game in 2014 was a titanic battle in the pouring rain in Croke Park, while I remember in 2012 that only for Henry’s two goals in the first half we would have struggled.
They are certainly a tough opponent; there’s a physicality to Limerick that doesn’t come with every opponent. Any time I played them I knew I had been in a match.
In a way the draw will help to focus players as it is the marquee match of the Qualifiers. It’s the game that catches most of the attention in terms of two of the stronger teams meeting, but overall I think Kilkenny can definitely win this.
I think there’s a bit of pessimism going after the loss to Wexford. It was a bad night for Kilkenny but I wouldn’t be of the opinion that we should be put out of our misery in the Qualifiers – if anything I think there are great opportunities there. If the team can beat Limerick they can get that confidence back and get some momentum going.
The players will only focus on Limerick – they won’t be looking a week ahead – and thinking that it’s a chance to get back on the road. And, if they do win, they’ll probably have come through the toughest of the four games, which will provide the confidence to get going again.
Hopefully that pessimism will turn around quite quickly if we can get the win.
Maybe it’s because of the last 15, 20 years of success that we’re not able to handle a bad performance. Kilkenny people won’t want to look up the road to Tipp but back in 2010 they were badly beaten by Cork in the first round of the Munster championship and came back to win the All-Ireland.
Tipp gained momentum through the Qualifiers, but that’s a tough task. If you win you’re automatically out a week later, and that sense of anticipation that was there for the draw on Monday will be here again next Monday.
However, it won’t be easy. Limerick are a tough team to beat. Look down through their side and you’ll find a nice mix of youth and experience. Nickey Quaid and full-back Richie McCarthy are there a long time as well as Declan Hannon in the half-back line. Paul Browne, Shane Hickey, James Ryan are all household names while you’re throwing in players like Kyle Hayes, Dempsey, Cian Lynch - there’s a fair team there.
Limerick didn’t perform well against Clare - that late goal took the bad look off the result - but they definitely have players. I’d say they’ll be fancying their chances and they’ll try to get on top early on and quieten the fans down. I reckon they’ll come with all guns blazing for this one.
With a lot of under-21 players in their squad Limerick will have been boosted by the performance the team gave when beating Tipp in Munster last week. When players are that young they have the confidence and know they can compete.
From that point it’s important for Kilkenny to set a marker in the opening minutes and settle into the game. If you look at the game in Wexford they got the goal from a quick penalty but never drove on. They were unlucky to miss a few chances.
I think you’ll be looking at a Kilkenny team where a few players will have had more hurling under their belts - the likes of Padraig Walsh, Ger Aylward - which will stand to the team.
The one thing I expect to see is some fire in the Kilkenny performance - they’ve had three weeks off, which is a perfect run-off to get over the Wexford disappointment and drive on for this game.
The general mood from the players is that, after losing to Wexford, they would have wanted to get out the following day and play again.
You want to get rid of that feeling, but the three weeks is the perfect amount of time as you’ve had the chance to fully recover from the previous game, physically, while mentally you’re building again and just mad to get going.
It’s not to prove anything to anyone else; the lads in there have huge pride in their personal performances. They wouldn’t have been happy with how they played and I’d expect the likes of Paul Murphy, Cillian Buckley, Conor Fogarty, Richie Hogan and Walter Walsh to be really driving things this time.

What will be interesting to see is whether Brian (Cody) makes changes, as he tends to do when the team draws or loses a game.
Richie Leahy came on for the under-21s last week against Westmeath and could add a bit of pace and creativity to the game so I wouldn’t be surprised to see him come in, whether it’s from the start or as a sub. Team selection will be interesting - will Brian make those changes to get things going again?
There will certainly be a bit of an edge to the team on Saturday. If Kilkenny go out to just play the match, then I think we’ll be in trouble.
The team has to go out with a real fight in them, some togetherness and a bit of spirit in how we perform. If it’s like it was in Wexford Park then it will be a struggle all evening long. A bit of speed and ferocity to the hurling will definitely make a big difference.
Nowlan Park will add to the occasion too. Whether or not there’s pessimism there the fans will travel to support Kilkenny - people will be looking forward to the team’s reaction after that Wexford loss, I certainly will!
This will be a real test of the panel’s character. Can they turn it around? Personally, I think they can and I’m looking forward to seeing how they fare. Hopefully, after Saturday’s game people from other counties will be looking at Kilkenny and saying they won’t want to meet them in the next round. That’s the feeling I’d like to have coming away from the game - but first it’s about getting that result.